I recently came across this picture of Reggie Jackson, which caught my eye for a number of reasons: 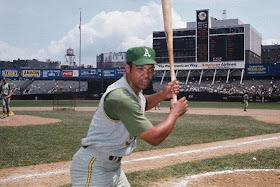 The thing I really like about this picture is how he is standing just a few feet away from the spot where years later he would earn the nickname "Mr. October": 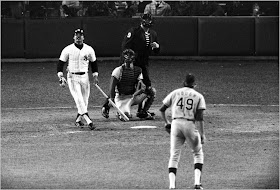 Even though he's just a few feet from the batters box, everything in the picture is completely different from the way it would be on October 18, 1977 when Reggie would hit 3 home runs on 3 consecutive pitches in Game 6 in what is perhaps the greatest single World Series game performance in history. 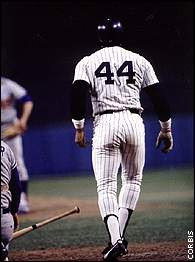 The obvious difference is a much younger Reggie Jackson in a Oakland A's uniform instead of the Yankee pinstripes, but the other thing I really enjoy is that it is the "original" Yankee Stadium from before the 1974 - 1975 renovations, which looked nothing like the stadium did once Reggie joined the Yankees.

Seeing a young Reggie Jackson posing for a picture with the old Yankee Stadium scoreboard in the background as an Oakland A is one of those shots where you stop and think this scene seems familiar but at the same time seems so different.

Here's Reggie hitting the last of his 3 home runs and a view of what the stadium looked like that night:

Speaking of familiar, the other interesting thing about the picture is that it appears to be taken in the same spot that the pictures from Reggie's 1970 baseball card photos were taken: 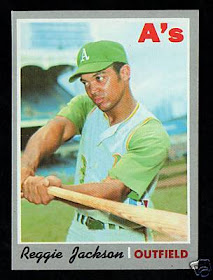 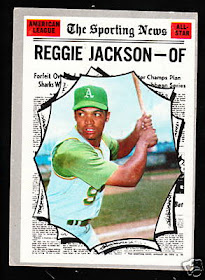 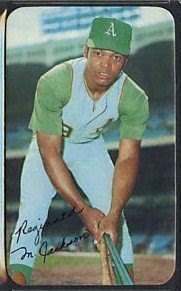 So that begs the question, was the picture I came across from the same photo session (or at least taken around the same time) as the photos that were used for Reggie's 1970 cards?

I think this picture may help solve the mystery: 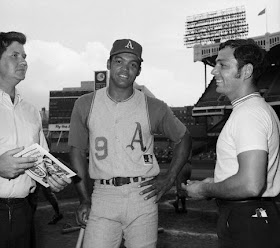 Here we have Reggie with the A's uniform showing the MLB 100th anniversary patch worn during the 1969 season which was not visible in the first picture given the way Reggie was facing the camera. The patch is clearly seen on Reggie's 1970 card (although hidden on the All Star and Super cards given the angles of the shots).

Of course this doesn't confirm the pictures on the cards were taken at the same session, let alone the same day, but it would imply that they were likely at least taken around the same time.

The color photo of Reggie I found on the Corbis website indicates the picture was taken on August 10, 1969. Doing some cross checking with Baseball Reference.com shows that the A's did play an early afternoon game in New York against the Yankees on August 10, finshing up a 4 game weekend series. The B&W photo indicates a date of August 16, but the A's were at home against Detriot that night, so I'm guessing it is misidentified and was actually taken at the same time as the color photo.

If in fact these photos were taken the same day as the photos used on Reggie's 1970 cards, then we've got a few nice out-takes from that session to enjoy in addition pictures on the cards.
Fleerfan at 7:57 PM