Next up on the list of 1981 Fleer Team Action NFL Football Stickers variations are 2 AFL rivals whose most famous game is remembered more for the show that interrupted the fantastic ending of the game than the ending itself. The "Heidi" Game as it has come to be known changed the way that football was broadcast when NBC made the decision to cut to the movie Heidi with 65 seconds left in the Jets - Raiders game in 1968.

Viewers missed the Raiders score 2 TDs in 9 seconds and come back from a 32 - 29 deficit to a 43-32 win because the game was preempted by the movie. The reaction from viewers was overwhelming as so many people called NBC that the switchboard shut down due to the massive amount of calls. As a result, NFL TV policies were amended to require that games be shown in their entirety in the markets of the teams involved.

The variations on the Jets stickers are a very subtle difference in the shade of green on the helmets. 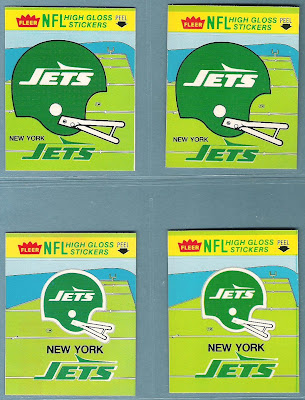 The difference is minor with the stickers on the left having a slightly darker shade of green.

There are actually 4 Raider helmet variations (although I've only got 3 variations to show). The obvious variation is that the helmet can be found with either a gray or white facemask. 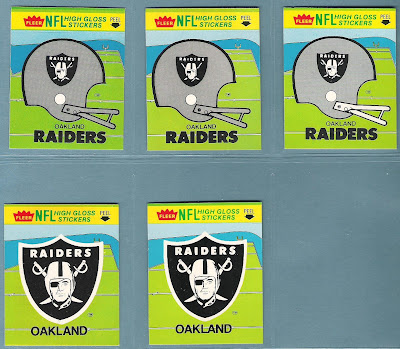 What's not so obvious is that there is a second variation that has to do with the placement of the helment on the football field background. As you can see in the scan below, the hash marks are in different positions on the 2 helmets with the gray facemask. 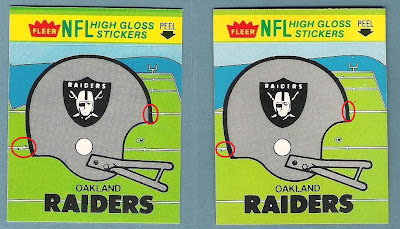 This same variation exists with the white facemask helmet, but I haven't been able to track down a copy yet.

The logo variation is also due to the markings on the football field background. 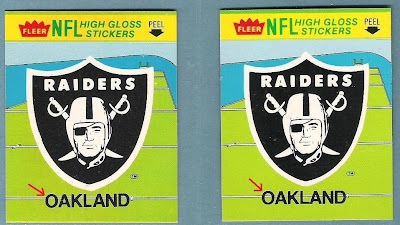 Next up in the ongoing review of the variations in the 1981 Fleer Team Action NFL Football Stickers are the Saints and Giants.

The Saints helmet can be found with either a white or a black facemask. In addition, the helmet with the black facemask is a darker shade of gold: 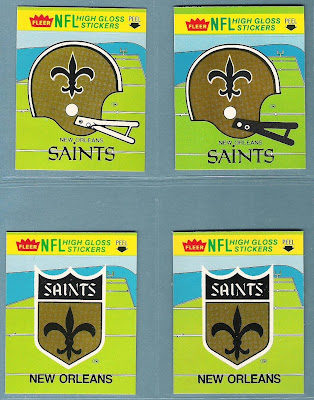 The difference in shading is also found on the logo stickers as the sticker on the right has a slightly darker shade of gold. 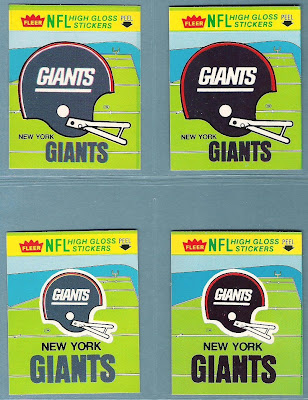 In the early years of the AFL, teams were responsible for creating their own game programs which resulted in unique covers which often used art work showing the home team's mascot taking on the opposition's mascot. These team created program covers are much more interesting than the league produced programs which followed a few years later in both the AFL as well as the NFL as the leagues tried to standardize the programs across all teams. 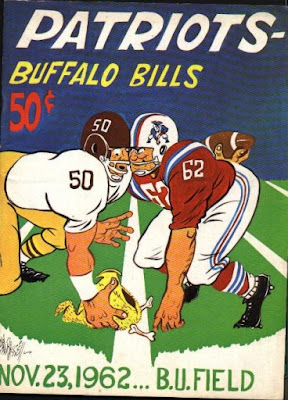 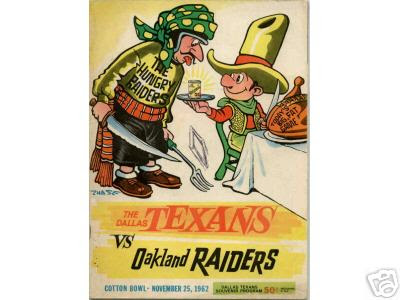 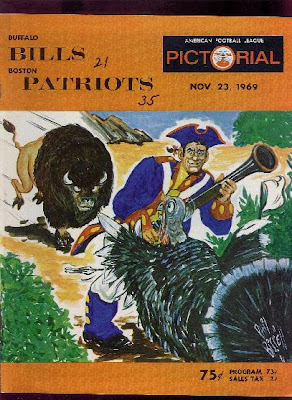 Happy Thanksgiving from The Fleer Sticker Project!
Posted by Fleerfan at 7:50 PM No comments:

Next up on the ongoing review of the variations in the 1981 Fleer Team Action NFL Football Stickers are the Vikings and Patriots. 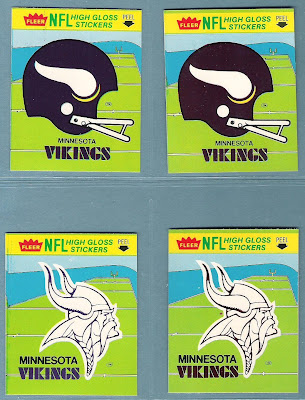 The same is true for the logo sticker, where the name Vikings is a darker shade of purple on the right. 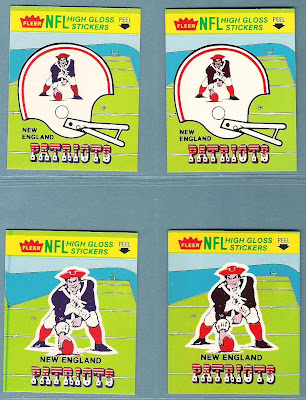 We've reached the half way point in the review of the sticker variations in the 1981 Fleer Team Action NFL Football Stickers. 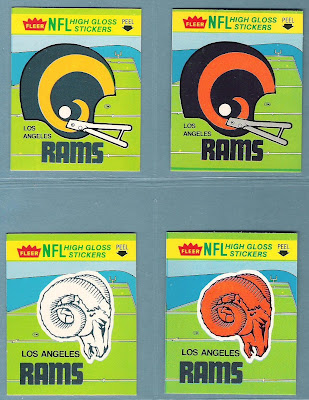 The logo sticker can be found with either a white or orange ram. 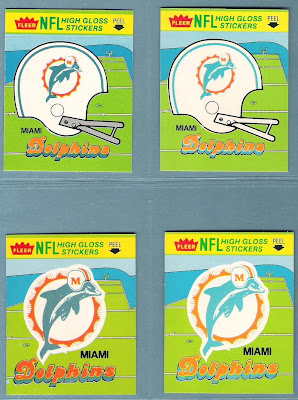 The same difference in shading can also be seen on the logo sticker. In addition, the shade of orange is darker on the stickers on the left as well.
Posted by Fleerfan at 8:28 PM No comments:

We've got 2 original AFL teams for today's installment of the ongoing review of the 1981 Fleer Team Action NFL Football Stickers: 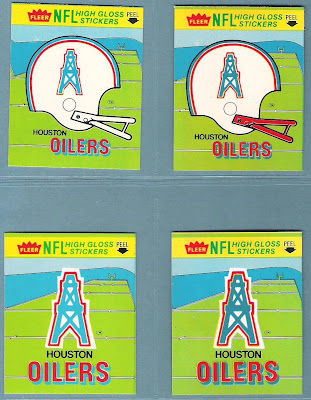 The variations for the Chiefs can be found in the different shades of red that were used. Once again I'll apologize for the fact that my scanner doesn't really show the difference as well as is should, but both the helmet and logo stickers on the left have a lighter shade of red than the stickers on the right. 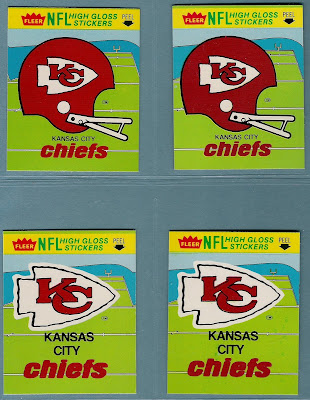 The differences in the shades of red are more easily noticeable than what the scan is showing.
Posted by Fleerfan at 7:14 PM No comments:

We've got 2 NFC North teams for today's installment of the ongoing review of the 1981 Fleer Team Action NFL Football Stickers: 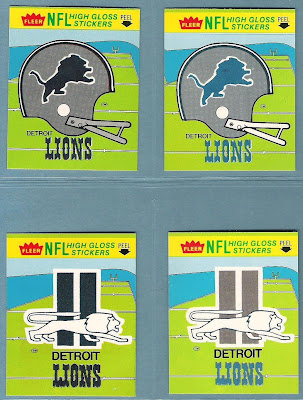 As we've seen with a number of teams, once again we've got a facemask variation, with the helmet sticker having either a white or a green facemask. 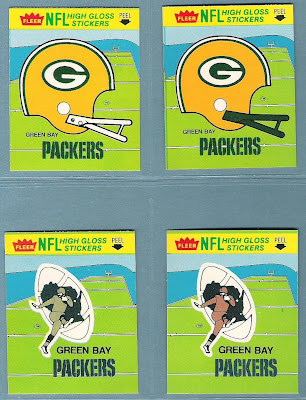 The logo stickers can be found with the football player wearing either a light green or a brown uniform.
Posted by Fleerfan at 8:01 PM No comments:

Time for the next 2 teams on the ongoing review of the 1981 Fleer Team Action NFL Football Stickers: 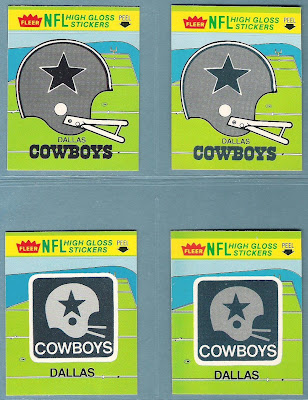 This same color variation is found on the logo stickers as well. Also note different shades of grey for both the helmet and logo stickers.

There are 3 helmet variations for the Broncos. The first variation on the left is a light blue helmet with a red "D". The variation in the middle has a similarly colored helmet, but with an orange "D" (which unfortunately didn't show up very well on my scanner - take a look at the logo stickers below the helmets to get a better idea of the color difference). The variation on the right is a very dark (almost purple) helmet which also has an orange "D". 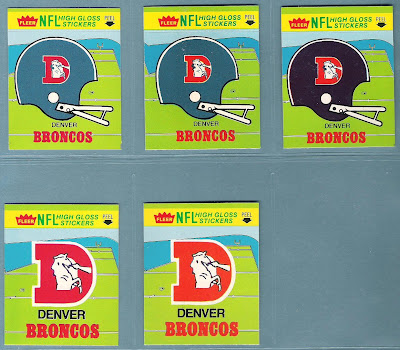 The logo stickers show the red/orange difference that is also found on the helmets. As was the case with the Browns variations I reviewed last time, my scanner is not doing as good a job showing the true difference in shades of color between orange and red as what you will see when you are looking at both stickers in person.
Posted by Fleerfan at 8:18 PM No comments:

For the 3rd installment of the review of the multitude of sticker variations in the 1981 Fleer Team Action NFL Football Stickers, we've got the Bengals and Browns:

Both the helmet and the logo stickers both have the same variations with either white or black facemasks and different shades of orange: 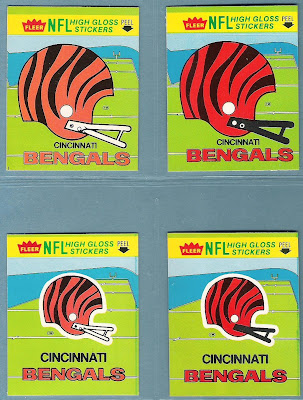 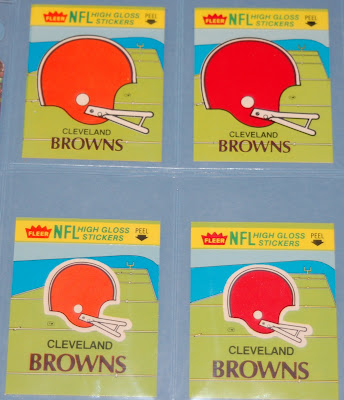