I came across this Spanish 45 picture sleeve for the Rolling Stones, and loved how they have pictured the band as actual stones, complete with their names, and Mick asking the rest of the band "have you seen your mother, baby, standing in the shadow?": 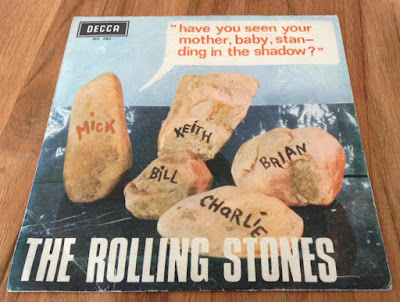 Perhaps the Spanish record label was not fond of the Stones in drag, so they decided on a safer cover than this: 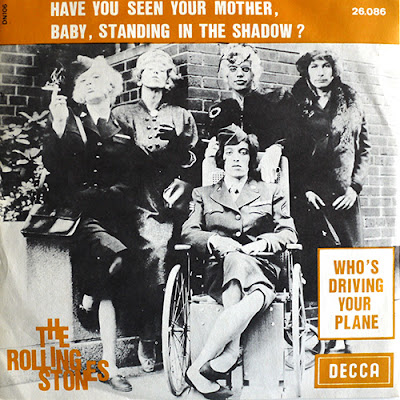 After all, the Spanish record company thought this was a better cover for Sticky Fingers 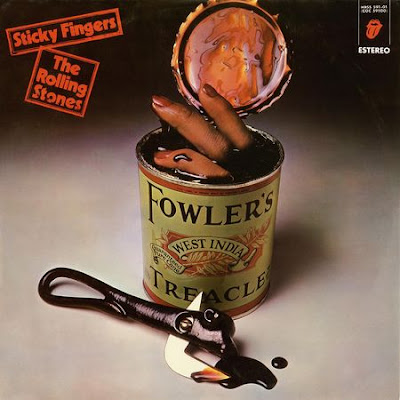 than the iconic Andy Warhol cover: 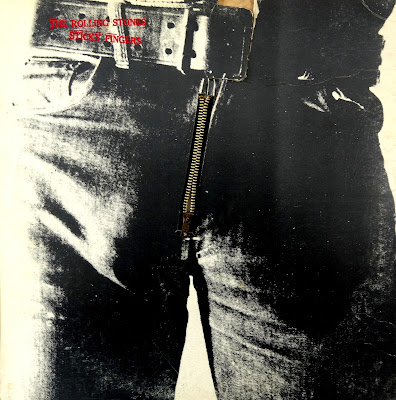 Posted by Fleerfan at 9:37 AM No comments: 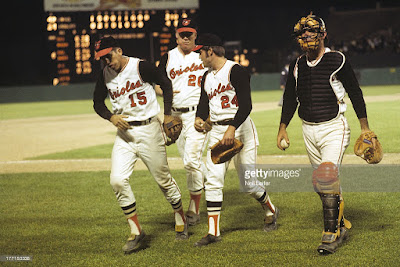 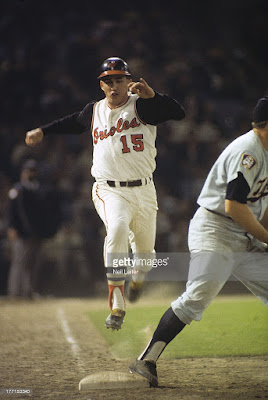 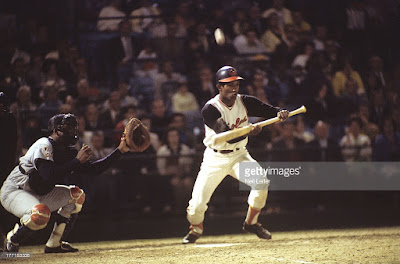 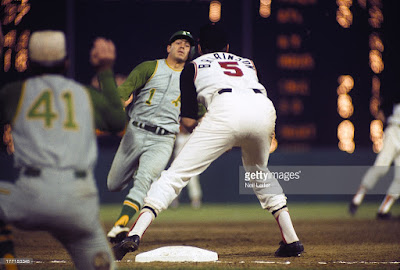 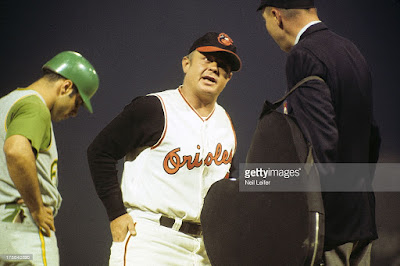 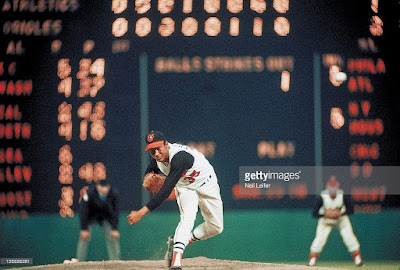 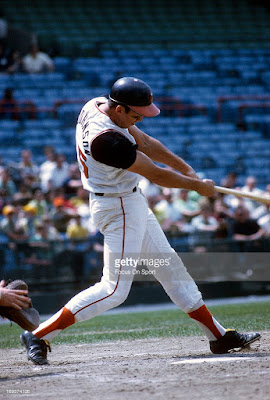 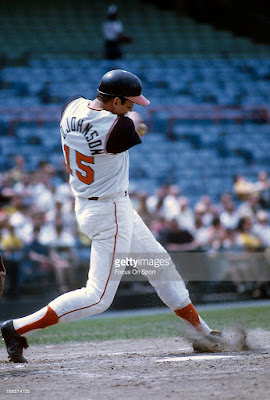 I just came across an auction that ended on ebay for what was listed as a 1971 Topps Greatest Moments card I had never seen before:  a Baseball Coin Rub Game card: 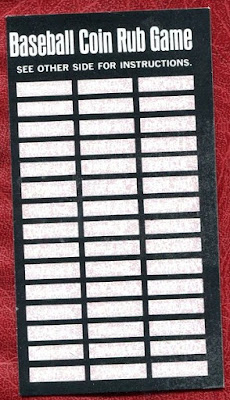 I have never read anything about the Greatest Moments cards coming with a Coin Rub Game card, but this sure looks like it would have come with this set.  Here is the picture from the auction, which included the Sal Bando card as well: 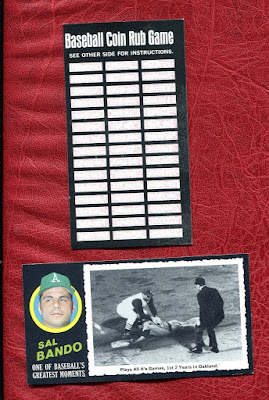 The cards are the same size with black borders.  The winning bid for this auction was $1,275, so that should give an idea of how rare this card is.

Here is a look at the back. 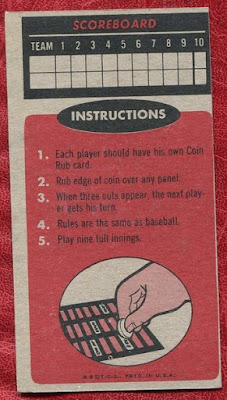 It does have a similar color scheme as the back of the Greatest Moments cards, but does have a different card stock: 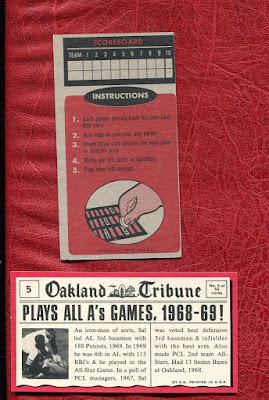 Information on how this set was distributed is very limited. Fortunately a wrapper has surfaced, and recently sold at auction for $3,287.

However, the wrapper does not mention a game card 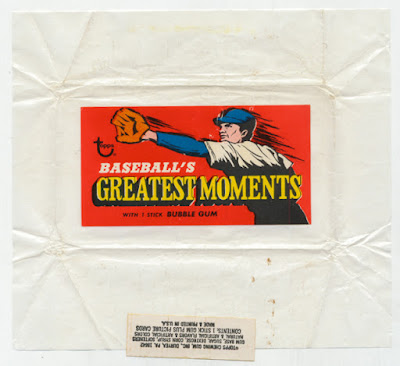 nor does the box: 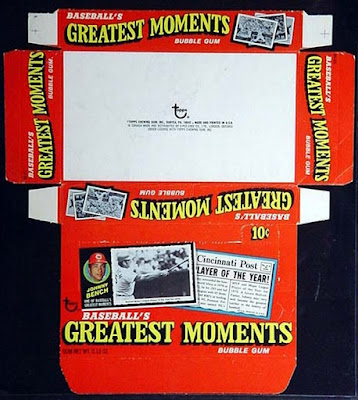 However, in searching for images of Topps coin rub cards, I came across this picture: 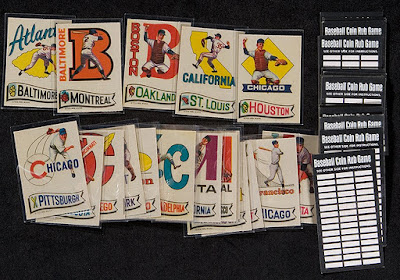 This picture comes from an post from The Topps Archives about the Topps Action Emblems from 1973 - 1974.  The wrapper for this test set does mention a baseball rub off game card in each pack, and the size of the wrapper does seem to match the size of the game card: 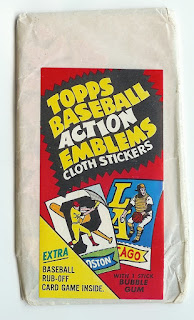 I was just looking at ebay to see the 2016 Topps Baseball cards that have just been released, and discovered that Topps is including promo stickers for an upcoming Wacky Packages set devoted completely to baseball.

Here is a look at the 6 promo stickers available in 2016 Topps Baseball packs: 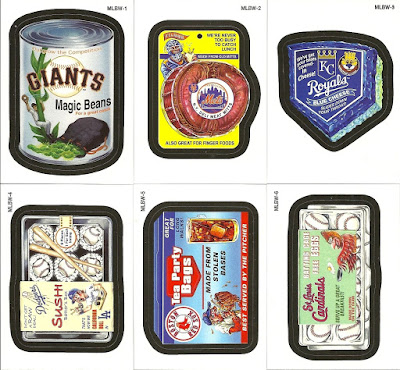 According to the back, the Baseball Wacky Packages series will be going on sale in March: 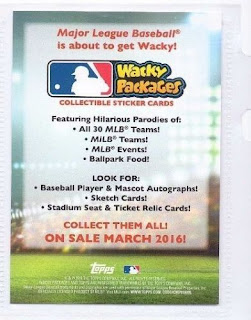 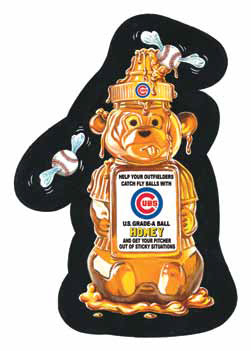 And here is a link to the flyer.


What a great idea combining two of my favorite collectibles - Wackys and Baseball.  I can't wait for these to come out next month!

Saw this poster yesterday at an antiques shop. Its a poster for the promotion Coke did with the NFL back in 1966. 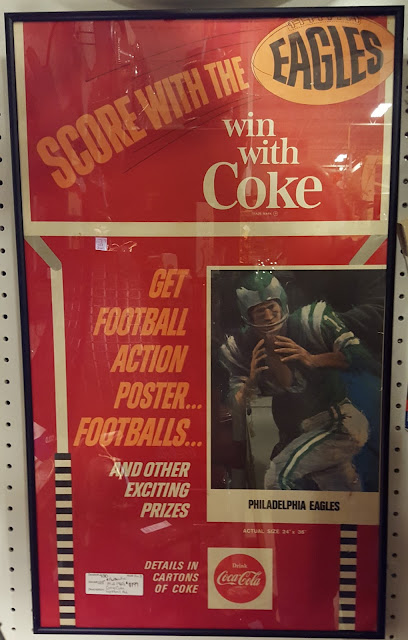 One of the prizes from the promotion was a team poster with Dave Boss artwork, which is shown on this poster.   In return for collecting a full set of bottle caps, you could earn a couple of different prizes.  Here is a look at the Coke Saver Sheet for the Chicago Bears: 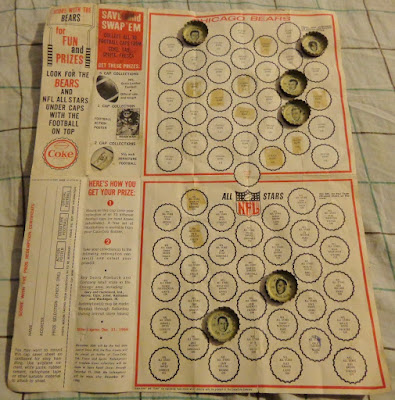 Here is a closer look at the prizes: 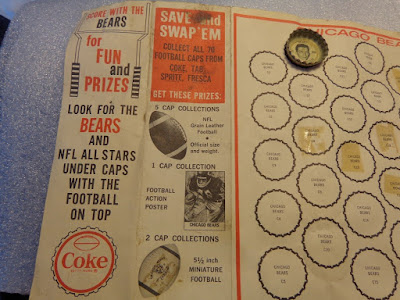 And here are the details on claiming your prize: 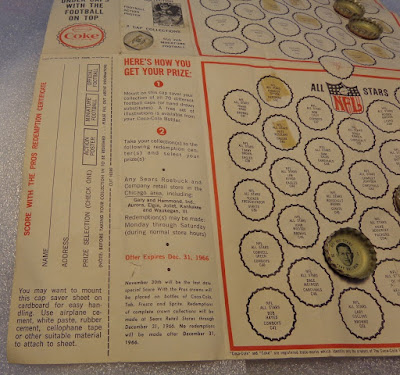 Just as they did with Major League Baseball, there were a few other promotions that Coke did with the NFL for other sets of prizes that I will cover in future posts.
Posted by Fleerfan at 9:41 AM 2 comments: