Back to School with NFL Lunch Boxes

Now that the kids are back in school, and the NFL season is underway, this is a great time to take a look at the different NFL lunch boxes that have been produced over the years.

1975
I'd like to start off with the lunchbox from my personal collection that I took to school each day back in 1975: 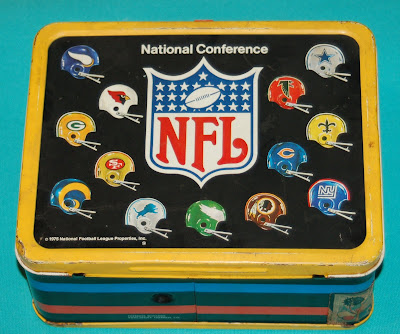 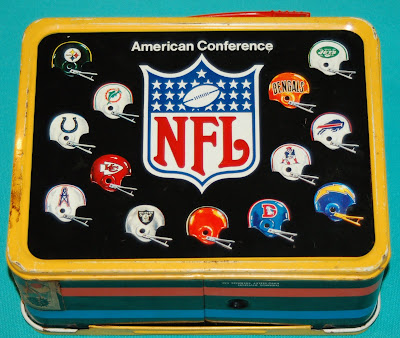 The sides have red and blue stripes going around the lunchbox: 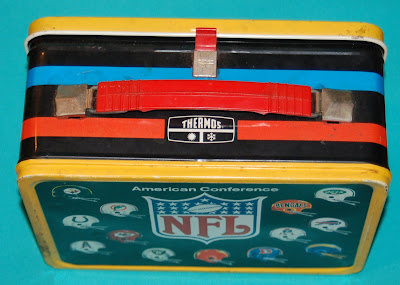 And just to make it all the more authentic, its still got one of the Wacky Packages I stuck on it almost 35 years ago: 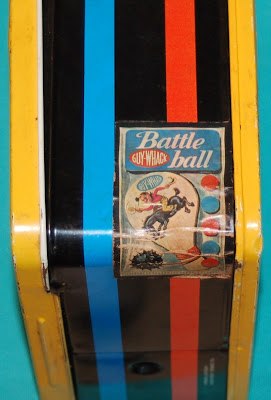 Wacky Packages were the first thing I ever collected, so this lunch box is a great example of 2 things I really liked back when I was a kid. As I recall, I think I got at least 2 years of use out of this lunchbox as I did not get the 1976 version. Unfortunately I don't have the thermos any more, but I did find someone selling this lunchbox with the thermos on ebay, so here is a look at what the thermos looked like: 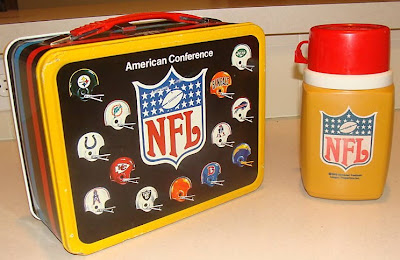 1964
Going back to the very first NFL lunchbox, the 1964 lunchbox is fantastic. From the Bears vs. Packers action on the front 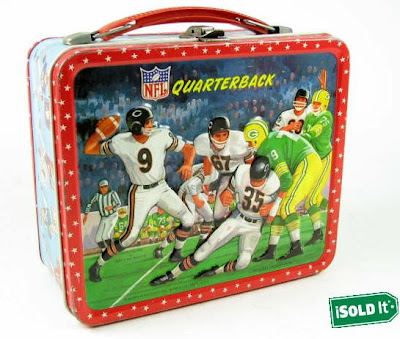 to the Giants vs. Browns action on the other side 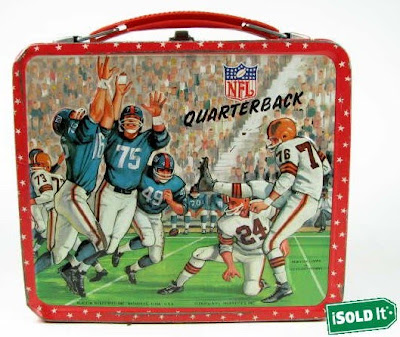 to the team logos and uniforms of each team around the sides: 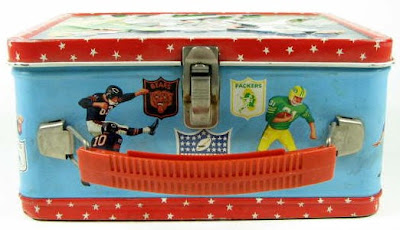 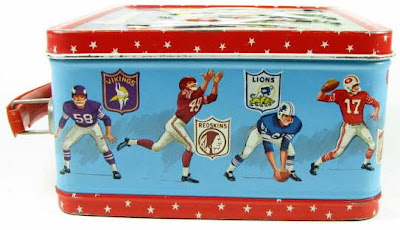 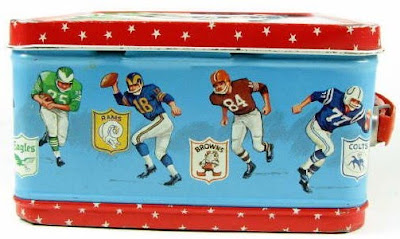 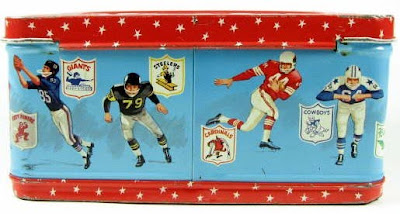 this is truely an awesome lunchbox. To make it even better, the thermos is great as well, with a series of referee signals: 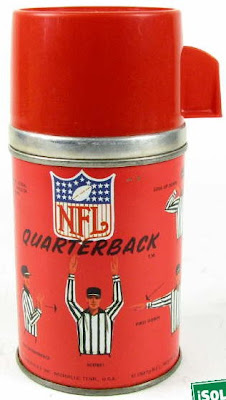 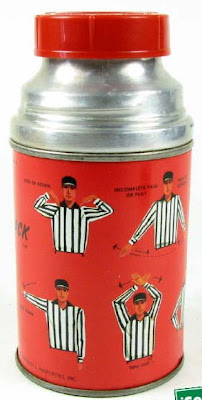 The lunchbox has a 1964 NFL Properties copyright: 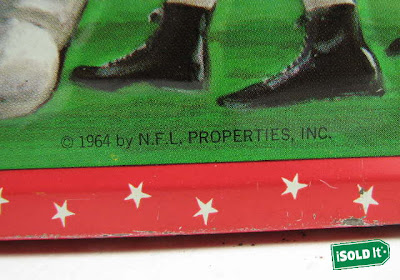 I'm not sure if this lunchbox was only available in 1964, or whether it was a design that was used for a few years afterwards as well. Since there don't seem to be any different NFL designs until we get to the 1970's, I'm guessing this design may have been used for a couple of years. 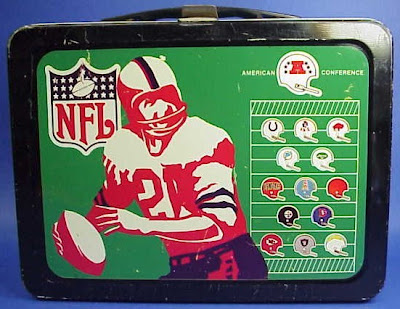 and NFC teams on the other: 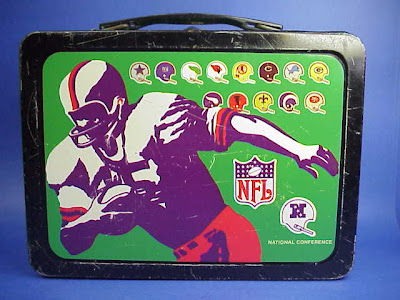 Given the Chargers and Eagles helmets are white, I'm guessing that this lunchbox is from either 1972 or 1973 (since the Chargers helmet changed to blue and the Eagles changed to green in 1974). 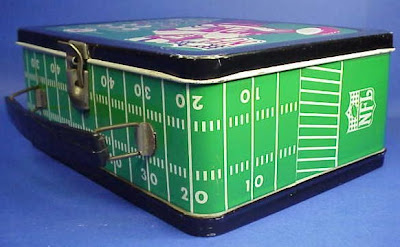 while the bottom has the team names: 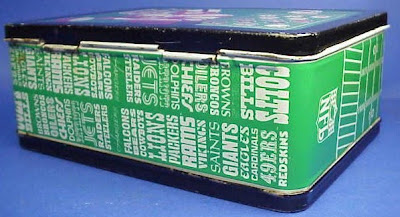 1976
One year after the 1975 lunchbox I profiled above, a new lunchbox design was created to include the 2 expansion teams, again with the AFC on one side: 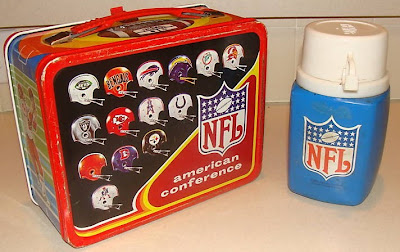 and the NFC on the other: 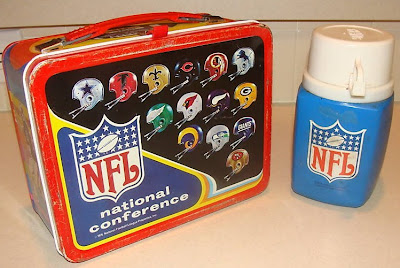 The sides of the lunchbox have a generic AFC and NFC player: 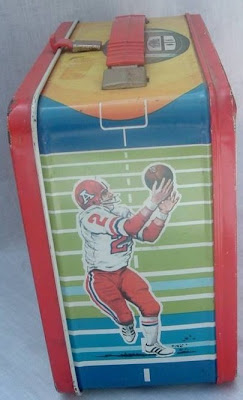 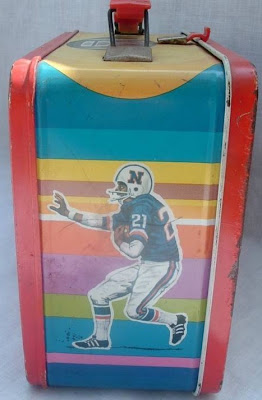 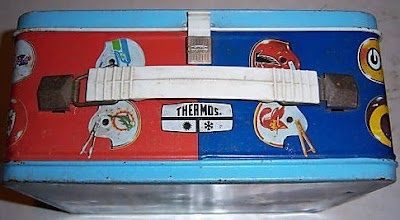 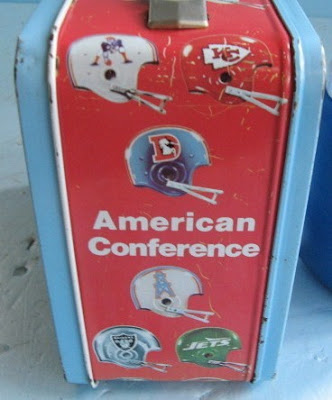 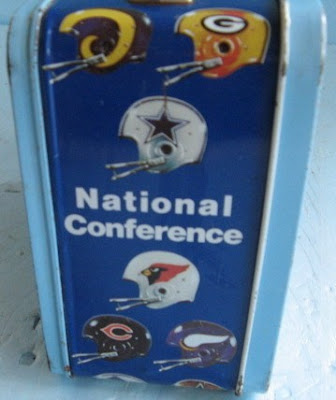 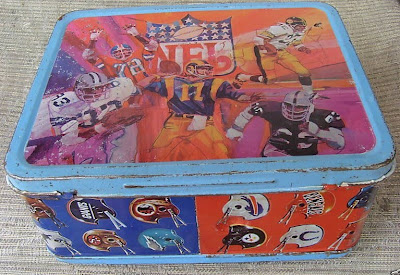 and had a painting of various NFL players (including Tony Dorsett, Franco Harris, Gene Upshaw, and Pat Haden) on the front 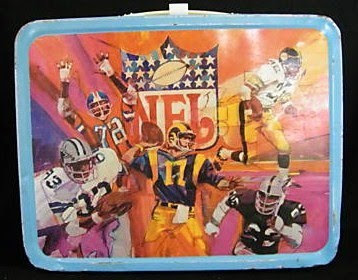 while on the back was a very uninteresting generic helmet with the NFL logo on it: 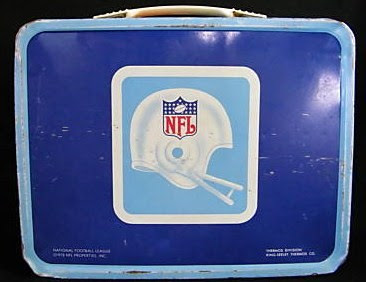 Early 1980's
It appears that the 1978 design was used for a few years as there is also a version with the Bengals helmet with stripes which would date this lunchbox from 1981 at the earliest (when the Bengals made the change to their helmet): 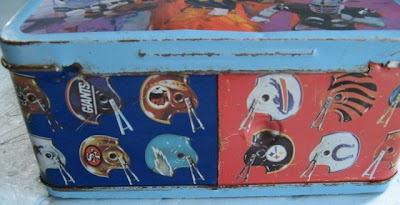 It appears this was to be the final design for NFL lunch boxes, at least in terms of those made out of metal.

It looks like NFL lunchboxes today are for a specific team instead of designed to promote the entire league: 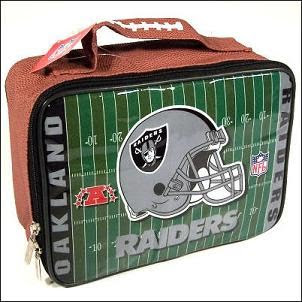 and the days of metal lunch boxes are now long gone.
Posted by Fleerfan at 8:50 PM

Interesting how in '76 the box had Tampa Bay in the AFC and Seattle in the NFC. I was six years old in '75, and I swear I had that '75 box of which you spoke. Good memories.
- Chris

that 1978 lunchbox is from at least 1981. That is when the Bengals put stripes on the helmets

I had the 1976 version of the lunchbox (ahhh memories!) but even then as a young lad, I noticed they put the expansion teams (Tampa Bay and Seattle) on the WRONG sides of the box...as you can see in the photo above, they put Tampa in the AFC and Seattle in the NFC! Whoops!

Excellent post! Brought back a lot of memories. I had the 1976 version and my younger brother had the 1978 version. I think my mom my still have those lunch boxes in her attic.

Nice collection, although I have a correction. The last lunchbox, marked "1978", would have to be from 1981 at the earliest. It shows the revised Bengals helmet that debuted that year.

The 1976 version, which I believe I owned, showed the expansion teams but placed them each in the wrong conference. Looking at the next version of the lunch box it appears that they corrected it (as shown by having the Tampa Bay helmet in the blue field on the side of the lunch box).

And, upon further review, the Seattle helmet was shown in the red field on the 1978 version opposite the Tampa Bay helmet in the blue field.

Thanks to everyone for the comments.

The 1976 NFL expansion did put Tampa Bay in the AFC and Seattle in the NFC for 1 season and then had them change conferences in 1977 so that during the 1st 2 years the expansion teams would play every team in the league once.

Good catch on the Bengals helmet. I'm guessing the copyright on the lunchbox must be 1978 since the 2 that I found on ebay both said they were from 1978 (but the pictures aren't clear enough to make out the copyright date).

UPDATE - after looking around some more on ebay, I found a version of the 1978 lunchbox with the old Bengals helmet. So, it looks like they used this design over a few years and updated the Bengals helmet when they made the change in 1981. I've updated the post to show both helmets