In addition to the miniature NFL football helmets promotion at the International House of Pancakes during the 1970's, IHOP also had a promotion featuring NFL team football helmet magnets that were available with a magnetic standards board: 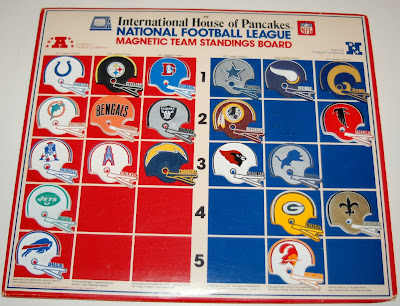 The copyright on the bottom of the standings board shows that this was produced in 1977, so it appears that the plastic helmets promotion was an early to mid 70's offer, while the magnets were offered in the late 1970's.

Just as with the NFL plastic helmets, the magnets were sold individually so you had the choice of picking which team you wanted. 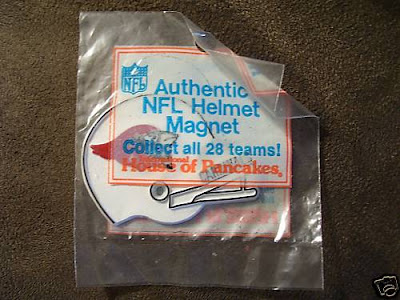 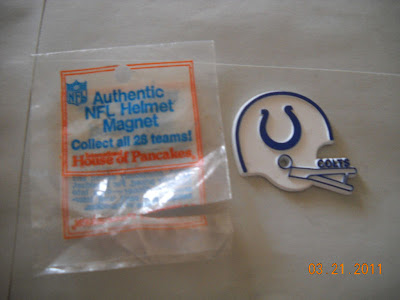 I remember trying to get as many magnets as I could each time we went to IHOP. Unfortunately as you can see from the picture of my board, I wasn't able to find all the teams.

The magnets were produced by Sports Magnets, Inc. who also sold the magnets with a nearly identical standards board: 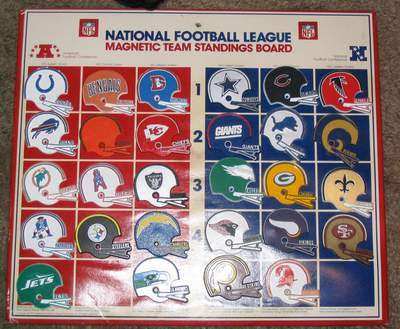 As you can see, the boards are almost identical except for the top the board which added IHOP's name and replaced one of the NFL shields with an IHOP logo:

To this day, I can't help but think about collecting the helmet magnets any time I pass by an IHOP, and the fun I had keeping track of the standings with my board each week that season.
Posted by Fleerfan at 11:02 PM

Me too. But there are two different production enterprises on my magnetic helmets: indeed "sports magnets inc., evanston, il" and "great american products inc., broadview, il". maybe they are both the same, only years between? and there is also a shop named the same in texas (www.gap1.com). unfortunately i am not able to search with all the possibilities, because i am not american. Anyway i think we have nearby the same problem: I want to complete my nfl-helmet collection close to the nfl-teams today. So there are some newer teams left without a magnetic helmet. The only similar product i could find were some team-related six-packs with 2" magnetic helmets on (www.championsondisplay.com or cheaper www.amazon.com). Always expensive but for a few teams ok. hope i can help you to complete your collection. cheers!

im willing to buy a complete set if any one wants to sell theirs..here's my email. rexchapman3@aol.com

I was 15 and on vacation in St Petersburg Florida when I bought this board and all the helmets at IHOP. I lost the board long ago but the helmets have acted as Fridge magnets to this day. I've kept my eye open for similarly sized magnetic helmets over the years and have found ones for the new teams and logos. Wish I had the board to put them on.

I had the complete set. I still have some of the helmets but most have been lost to time. I use to get the Monday newspaper and grab the sports section to see all the team standings.now everyone just Googles. It's not the same experience.