As the LA Kings continue their amazing postseason run towards the Stanley Cup, I thought it would be a good time to look at the Hockey stickers that were inserts in packs of 1978 - 79 Topps Hockey cards: 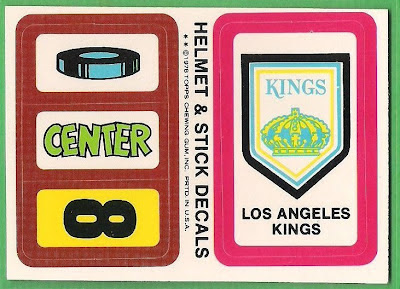 In addition to team logo stickers, there were also 3 smaller stickers on each card which featured a piece of hockey equipment (such as a puck), a position (such as Center), and a number, which could go on your helmet or hockey stick.

Even though there were only 17 teams in the league at the time, there are 22 different stickers as 5 teams can be found with 2 variations of the 3 smaller stickers.

Here is a look at the complete set of 22 stickers: 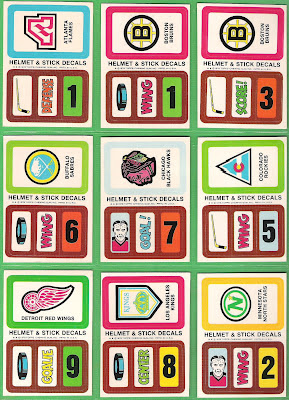 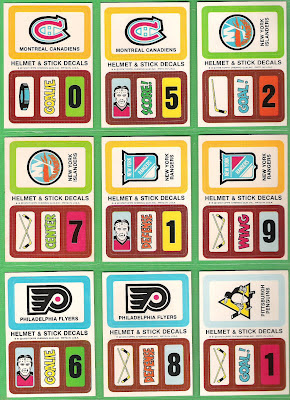 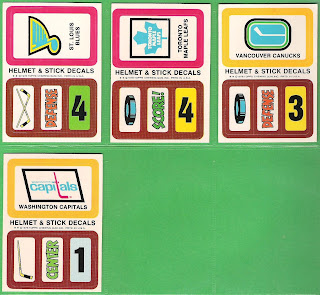 The wrapper mentions there is a "Sticker In Every Pack!" 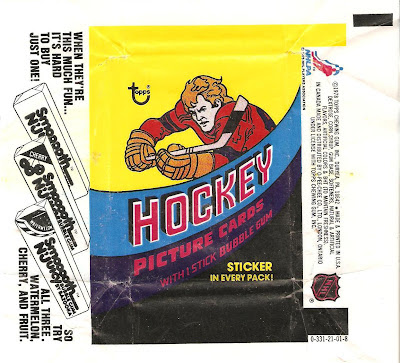 and finally, here is an example of what the 1978-79 Topps Hockey cards look like that came with the stickers: 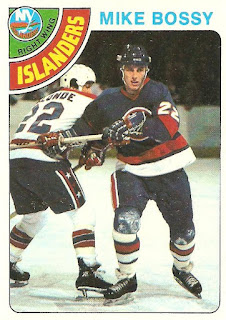 Its too bad Topps didn't do something similar with their Baseball cards at the time, as it would have been nice to have a set like this with Baseball logos.
Posted by Fleerfan at 9:30 PM

Great looking set and that bossy is sweet too.

Nice job on displaying this set. There is actually a variation in this set: all can be found with 1 or 2 asterisks in the copyright line (e.g. compare the two Flyers items that you show). I don't know what this designated, but perhaps there were two separate printings. The same is true for the 1979-80 set. Do you have any ideas about this?