Before getting to the 1960 Fleer Football decals, I wanted to reminisce about "the good old days" for a moment. It was sad news for the hobby as we learned that Larry Fritsch passed away last weekend. Larry was a true hobby pioneer becoming a full time dealer in cards well before anyone ever thought you could make a living selling baseball cards. He leaves an incredible legacy and will be greatly missed.
In thinking about Larry's passing, I started thinking back to the days when mail order was one of the only ways you could get cards since card shops had not yet started to proliferate - in other words, back to the late 70's and early 80's. While I was aware of Fritsch Cards, the dealer I bought my mail order cards from was Renata Galasso.

If you were a kid during the 70's and 80's and collected cards, chances are you had heard of Renata Galasso, or at least seen the ads if you read any baseball magazines such as Street & Smith.

If you don't remember the ads, take a look. Perhaps this will jog your memory: 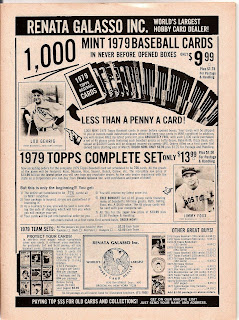 Renata was quite a business woman. The story goes that she started putting together sets and selling them as a way to pay for college in the early 70's, and ended up growing the business to the point where she called herself the "Worlds Largest Hobby Card Dealer". Whether or not this is true is anyone's guess, but for a time from the mid 70's to the late 80's, Renata was one of the key mail order dealers in the hobby.

Over the years I bought many different sets through her, and was always very pleased. It was always a thrill when the latest catalog would come out, and it felt like Christmas when the UPS truck showed up with my cards. Usually during the season she would mail out order forms for sets that were going to be released later in the year, such as the update sets and the Topps Tiffany sets.

I had always imagined she had a large warehouse with tons of cards. As it turns out, the truth was a little less impressive.

Here is a link to a set of pictures taken from her store in Queens in 1986, which does not appear to be very big:

Renata's business became so successful that she, like Larry Fritsch, produced some card sets. Many of the sets were very well done. Thanks to Renata, I was able to get a full set of the rare Mars Attacks cards through the very nice reprint set that she produced. 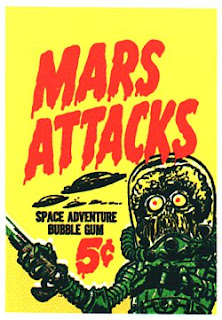 Being in New York, it appears that she was able to work with Topps on a few projects since in addition to the Mars Attacks set, she also produced a Reggie Jackson set that included the picture from the rare test proof showing Reggie on his 1977 Topps card as an Oriole. There are also a few other pictures in the set that come directly from Topps cards, and the puzzle on the back of some of the cards forms a picture of all of Reggie's Topps cards up to the point the set was issued in 1984.

Here is the Reggie set with the Oriole card picture in the top left: 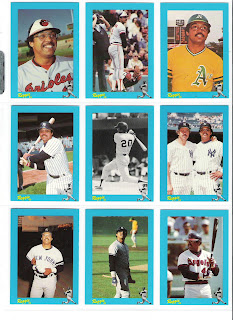 She also did a Pete Rose set, which included Topps images: 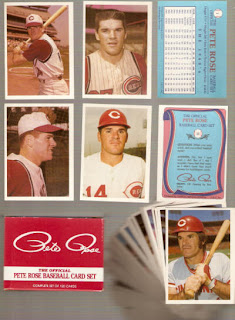 Other players who were featured in their own sets were Don Mattingly: 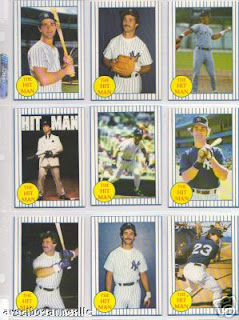 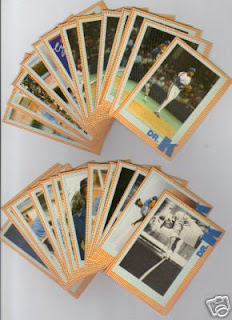 and Willie Mays (including an autographed first card in the set): 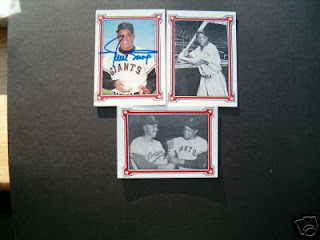 In addition, she did a set spread over 6 series of 45 cards each in conjunction with TCMA called Galasso Glossy Greats highlighting stars from the past: 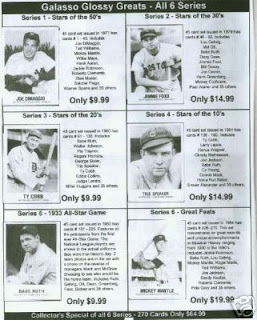 Here is a picture of some of the cards: 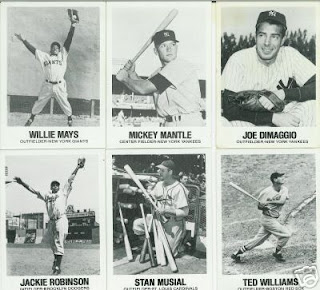 The 45 card sets came free when you purchased your Topps set. See the ad above that explains that you get a free glossy set (a $4.00 value!) when you buy your Topps set from Renata.

She also did some sets based around teams. For example, the 1969 one-year wonder Seattle Pilots: 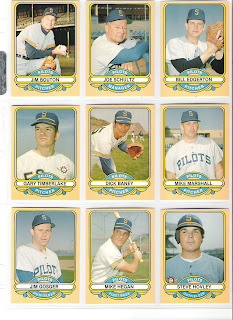 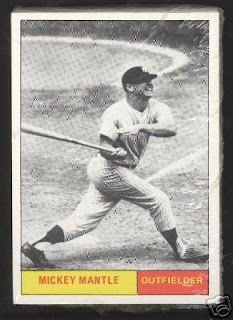 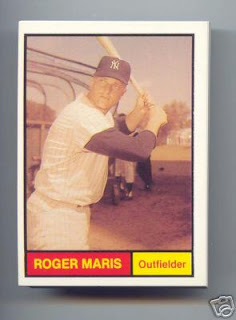 The other thing that Renata did was publish a Baseball Card magazine. This was much more than just a catalog for her store - it was a glossy magazine with pictures of players and articles as well as vintage card reprints, and was very well done. The name of the magazine was The Baseball Hobby Card Report, and you can occassionaly find them on ebay.

Here is the first issue: 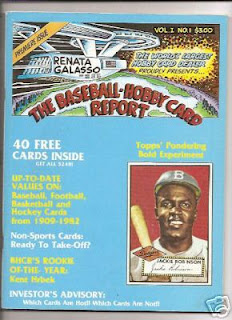 Each issue contained reprint cards, such as these which were included with the 1st issue: 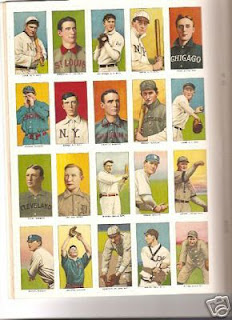 And what look back at the early 80's collecting scene would be complete without Ron Kittle: 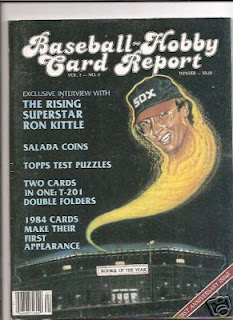 I'm not sure what ever happened to Renata. I think she stopped the mail order business sometime in the early 90's. I'm sure the explosion of baseball card shops that took place in the boom time of the 80's hurt the demand for a mail order business, but I can't say if thats the reason she finally got out of the business or not. There may have been other reasons for her disappearing from the scene as well.

I have very fond memories of dealing with Renata Galasso and purchasing many sets from her over the years. Seeing the ad for 1,000 Mint 1979 cards in unopened boxes or a complete set for $13.99 takes me back to a time when card collecting was pure fun. No serial #'ed inserts to chase, no parallel cards, no outrageously priced packs, etc. Its those memories of how much fun collecting can be that still keep me collecting today.

The store was actually in Brooklyn, NY on 63rd Street and 10th Avenue. I used to go there regularly in the early and mid 80's, despite the fact that I was a Jewish kid from nearby Boro Park and this madman Joe Galasso (Renata's dad, perhaps) would rant and rave about "the Jews" whenever I walked in there with my friends from yeshiva. In those days, I guess I cared more about getting some baseball cards than having self-respect.

Joe - thanks for your comments. Was Renata at least nice to deal with?

I actually don't ever remember her being in the store on the 20 or so occasions that I went there.

I did subscribe to BHCR - the magazine you mentioned - but only received one issue.

I think I have some of those Willie Mays cards. It was cool getting some HOFers on a kid's budget in the 1980s.

Just doing some restacking of my cards and I ran into the catalog that I have...Vol 1, No 1, like yours. Inside there is a picture of her and her husband. I bought a set of 1975 Topps from her in 1980 for $30. Best investment I have ever made. Also found my ORIGINAL dogeared and torn up copy of the 1979 Sport Americana Basbeall Card Price Guide by Dr. James Beckett and Dennis Eckes (Den's Collector's Den)

Thanks for this memory. I bought my first complete TOPPS set from her (and also thought she must have had a huge NYC warehouse). I'm trying to remember where I first saw the ad. Boys Life Magazine perhaps?

I stopped collecting sets in the late 80s (just before the bottom fell out of the market) but there were few moments of childhood excitement that could compare with getting that package from Galasso.

A FRIEND OF MINE HAS VARIOUS CARDS FROM GALASS0;MAYS,JACKIE ROBINSON,SANDY KOUFAX,DRYSDALE,DIMAGGIO,AND MANY OTHERS PRINTED 1977-1980.WHAT WOULD THEY POSSIBLY BE WORTH?

First time I've come across this post. I remember many of the images that you featured here, especially that top image.

I, too, ordered some stuff from Renata Galasso and was always fascinated by the advertisements she put out. I had the catalog she issued, too. Don't know what happened to it. I always wondered what happened to the business because it was the number one mail-order advertiser in the hobby, or seemed like it at the time.

Great Memories!
Bought a few items from Her as well back in the day. Back then if you collected cards you were viewed as a bit off the wall. Now I guess we still are as we now do our bidding with on line auctions and send our cards to New Jersey, California and Texas to have them slabbed... =)

I too ordered card sets from her in the mid 90's. Never got the cards or my money back. Ripped off.

I know Renata personally. She is one of the most caring and generous people I have ever met. When I see her this week, I'm going to show her your article. I am sure that she will be happy to hear that so many people have fond memories of her.

If you talk to Renata, please let her know what fond memories I have of ordering cards from her, and how much I enjoyed the sets that she put out and the excellent Baseball Hobby Card report.

I remember her ads in baseball digest,always looked forward for the UPS man to come.Those were the days before tracking so every time the truck came down the street I thought it was my cards coming.I remember the t-206 tobacco cards set she did.You got a set without having to be a millioner

I'd buy Photos of the old-time players and marvel I'd made a connection near Yankee stadium. This was early 70s and it wasn't even a hobby just something folks would laugh at me about. Thanks for this trip down memory lane

What would these be worth?

Digging through my attic or that of my mom for the first time in 20 years and I have the 75 said with the return address of 75th St. fittingly enough

Digging through my mom’s attic for the first time in 20 years and I have a box of 75 tops with the return address of 75th St. for RG Inc.