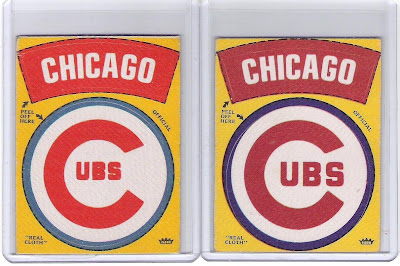 The Cap/Team Name also reflects the same color differences as seen below: 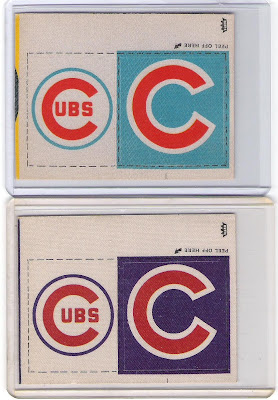 In both cases, the patches with the lighter shade of blue are the earlier version of the patches.

Thanks to Ray from Cardboardgold4u, who let me know that he found a Cubs Fleer Cloth Patch variation that I had not previously been aware of: 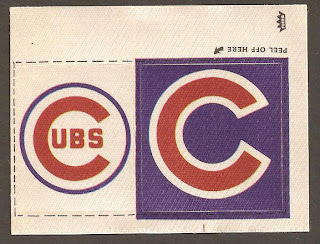 At first glance, there doesn't appear to be anything different about this patch.  To see the difference, you need to look at the "UBS" inside of the large "C".   The letters are further to the left and the S is completely inside the "C", whereas most patches with the darker blue background have the letters more to the right of the "C", as seen in the picture above.

Thanks again to Ray for this new discovery!
Posted by Fleerfan at 8:13 PM

I have found a Cubs variation not mentioned in your blog.

I have found a Cubs variation that has not been discussed in your blog. I also know of other variations. Please email me at
bergie7857@aol.com

I find it interesting that I found this variation 5 years to the day of you posting this blog!!!

Mine does not have the fleer logo

the version I have does not have the fleer logo

First, this blog has been amazing for my quest.
I know it's several years old and this has likely popped up before, but there is a third version of the round patch. It has the S in Cubs reaching only to just beyond the inside of the C.
You can email me at markefricke@gmail.com for a scan