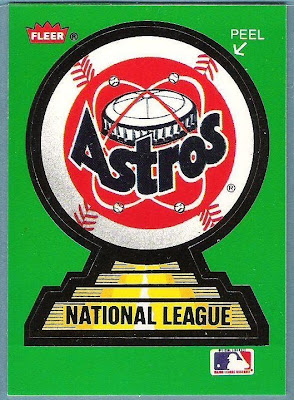 The backs of the stickers did change however, as the logo backs from 1987 were replaced with pictures of stadiums in 1988.

Once again, the team logos are featured on a baseball on a trophy stand: 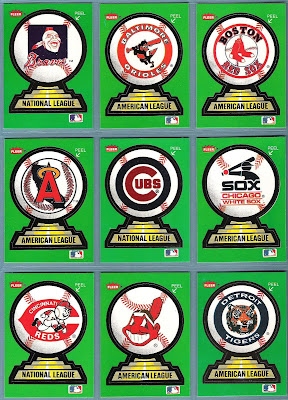 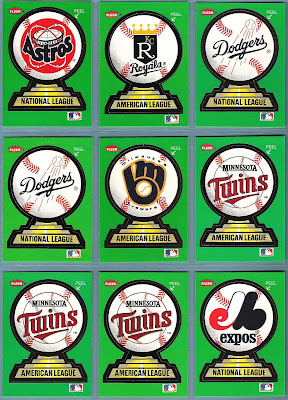 Why 2 Dodgers and 3 Twins stickers? For both the Dodgers and the Twins, there are back variations. The Dodgers can be found with the picture of Dodger Stadium in two different directions (the picture on the top is the more scarce of the two as the picture is upside down and was corrected fairly early in the print run): 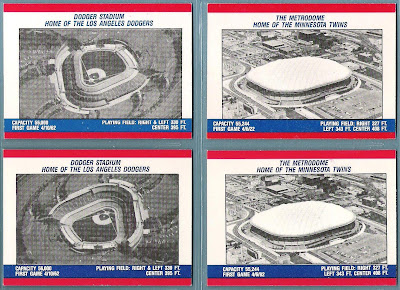 The Twins also have a back variation related to the information at the bottom of the sticker. The early printings misidentified the first game played in the Metrodome as taking place in 1922. Fleer caught the error fairly quickly and corrected it to 1982.

The Twins have an additional variation on the front. 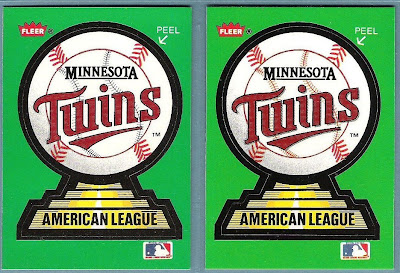 Take a close look at the stitching on the ball in the logo. 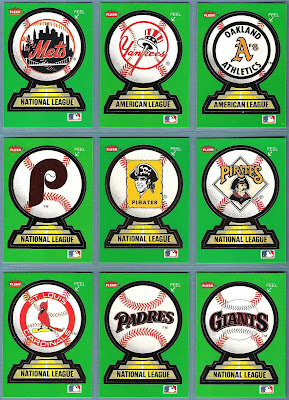 The Pirates also have a logo variation as the logo changed for the 1988 season, but Fleer apparently didn't make the change until after having printed some of the stickers with the older logo. The older logo is the much less common version.

Fleer also repeated the "2 on 1" sticker design with 2 team logos sharing the sticker, along with 4 red and white strips with the team names. Unlike the 1987 set which had no back variations however, the 1988 2 on 1's have many stickers which can be found with 2 different stadiums on the back (a result of the stickers being double printed on the sheet and Fleer not trying to match up the backs to the fronts like they did with the trophy stickers) .

In the pictures below, if a sticker shows up twice, its because it can be found with 2 different stadiums on the back (and usually neither stadium is for the teams pictured on the front). For example, looking at the first row, the Braves/Tigers 2 on 1 only has one back whereas the Orioles/Braves sticker has 2 different stadium backs: 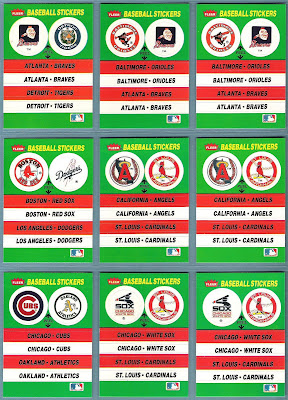 One exception - the White Sox/Twins sticker doesn't have a back variation, but it does have a front variation with the black seams & red seams as discussed above. 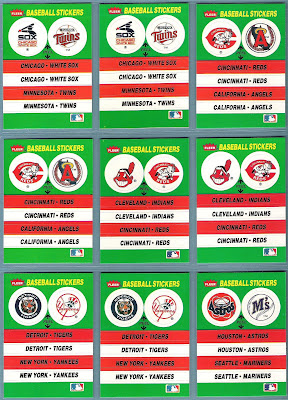 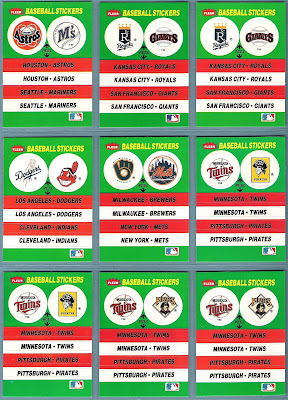 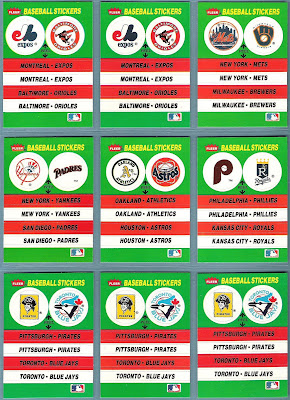 More fun with the Pirates. We actually end up with 5 different Pirates/Blue Jays stickers because we've got the old logo and new logo (2 variations) and 2 different stadiums (another 2 variations). So what is the 5th variation - well, one of the stadium backs just happens to be the Metrodome which can be found with and without the 1922 Opening Day error, which is why there are actually 3 versions with the old Pirates logo. 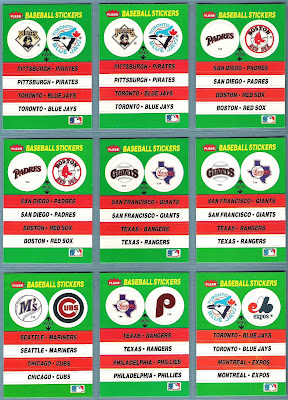 Here is a look at the backs with the stadiums: 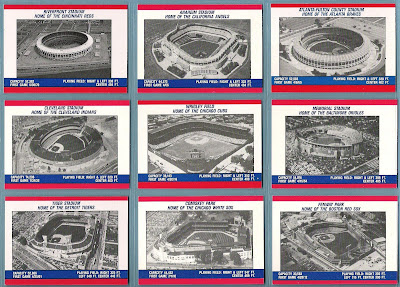 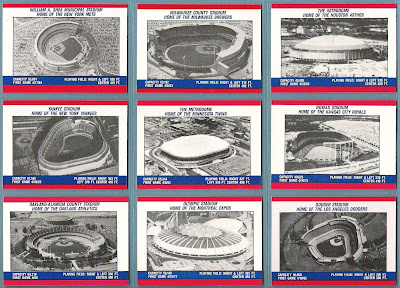 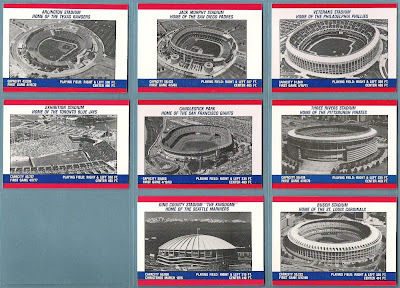 Reviewing these sticker backs makes me feel really old - 19 of the 26 teams no longer play in the stadiums pictured above.

The stickers were inserts in 1988 Fleer Baseball packs: 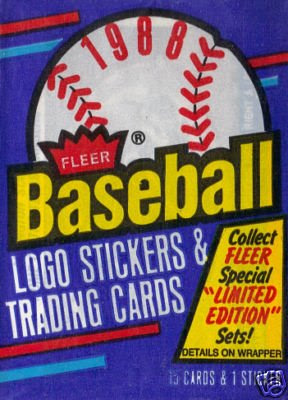 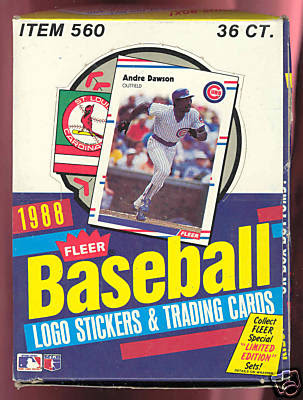 as well as Fleer's Factory set: 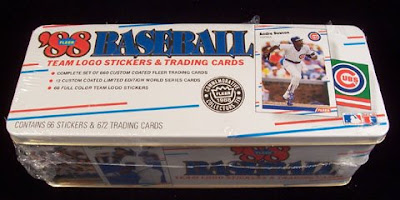 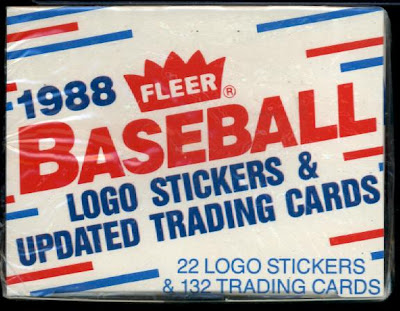 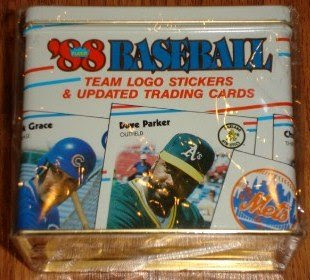 The stickers also came with Fleer's Baseball Star Stickers which would see its run come to an end with the 1988 release (these had been an annual offering for much of the 1980's) : 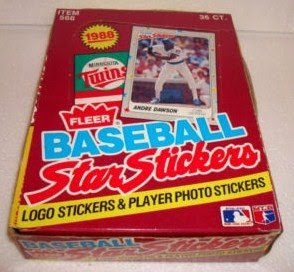 The Box Set bonanza was still in full swing in 1988 as there were once again 9 different box sets (the same number as 1987) available through different chains like McCrory's, Eckerds, Toys 'R Us, Walgreens, Revco, 7-11, Ben Franklin, and Cumberland Farms which each came with 6 stickers in addition to the 44 card sets: 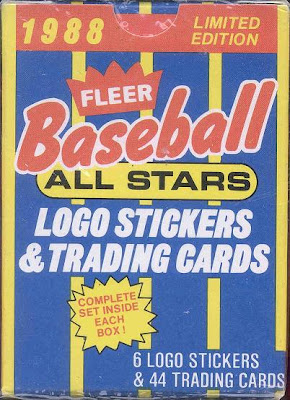 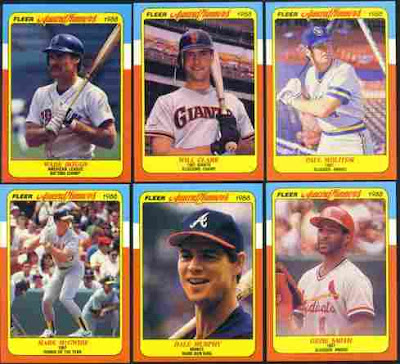 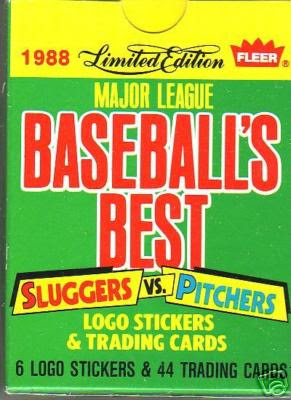 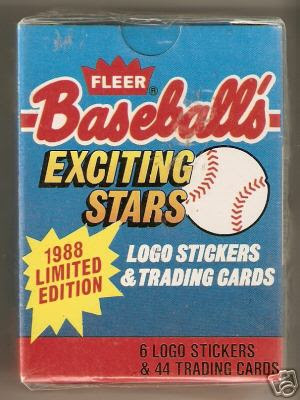 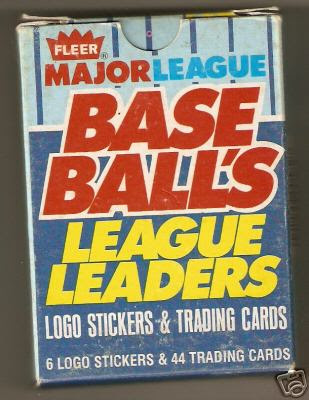 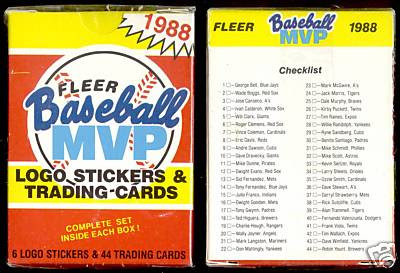 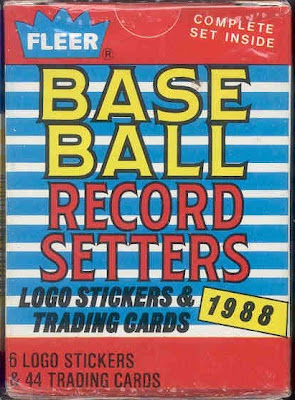 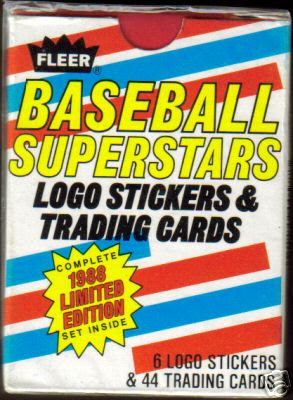 What a fun time it was to be a collector! As you can see by the number of Fleer releases in 1988, there were a lot of new releases to track down, but it was still somewhat manageable.
Posted by Fleerfan at 8:07 PM

What an awesome site!!!! I too collect stickers. This is great! You made my day. Can I share your site on minel.

Well this was an extremely useful post. I just got my box of 88 Fleer today and was curious about the stickers.

The box break will be here.

Thanks for the wonderful information.

FLEER STICKERS....VARIATIONS GALORE. I HAVE BEEN COLLECTING AND MAKING MASTER SETS FOR YEARS AND STILL NOT FINISHED!
BOB

THERE SEEMS TO VARYING SOURCES ON THE '88 STICKER COUNT. 29 LARGE LOGOS, 46 MINI LOGOS = 75. HOWEVER LOOKING AT YOUR SCANS, I MIGHT ADD ANOTHER 5 FOR 80, YOU MISSED A FEW, I THINK !WHAT OTHER STADIUM IS ON THE BACK OF ANGELS/CARDS AND W.SOX/CARDS? STICKER COLLECTORS..PLEASE COMMENT...BOB

I was shuffling through my '88 Fleer stickers the one day to use as mail day protectors and stumbled upon the Pirate logo variations and the 1922 Metrodome error. I knew this would be the site to turn to! I had know idea how many variations there were! Thanks!

Jeffrey - glad to be able to help. Thanks for thinking of The Fleer Sticker Project to research your stickers!

What is the other back for the Angels/Cardinals combo sticker? I have it with the Pirates stadium back but haven't seen it any other way.

Why aren't the 1988 Fleer logo stickers in the Beckett pricing guide?

Why aren't the 1988 Fleer logo stickers in the Beckett pricing guide?

I have had a very difficult time tracking down some of the variations. In particular, the stickers involving Minnesota 1922 on the back seem to be almost impossible to find. Do you have any recommendations as far as what to do? I've got piles of these stickers but the short print variations are a challenge.

guess what? there are 3 padres/red sox striped stickers (that are not shown in the pictures). there are only 2 different stadiums on the backs of these stickers (the dodger stadium and memorial stadium) but there are 2 dodger stadiums. one has the reverse photo error shown on the back.
i was putting a master set together and caught this. so add it to your master set.
thru the years this is the first one i have been able to obtain. good luck hunting this one down. tommydmi

as i am doing master sets of all the fleer stickers there is another sticker i caught on the 1988's.
the padres/red sox has three striped stickers. there are two stadiums on the back - memorial stadium and dodger stadium. the dodger stadium sticker has 2 different. it has the reverse photo error found on the regular sticker on the striped sticker also. so you have 2 dodger stadiums, the up and down.
i know, because i just found one. add this to your list and good luck.

Thomas - thanks for mentioning the Padres/RedSox variation with the reversed Dodger Stadium. I've had that on my want list for a few years since I heard about it, but haven't been able to find one yet. Glad you were able to find one.

I have two 1988 fleer stickers I can't find. The first one is Red Sox/Astros with the Metrodome on the back. The second is twins/cardinals with Three Rivers Stadium. Are these error cards?

No, I'm afraid those aren't error cards. Most of the stickers have a couple of different back variations, and the stadiums don't always line up with the team on the front.

Great information and as I read the comments, people have used your information over the years-its 2020 now. I came across about 200 Fleer sticker cards and could not make sense of this until reading your article SO THANK YOU

Hello - you don't have extras available to buy do you? There are a number of variations I have never been able to find. Thanks and great site!