After the incredible number of sticker variations in the 1981 Fleer Team Action set, the 1982 Fleer Football sticker set was (thankfully!) much less complicated. 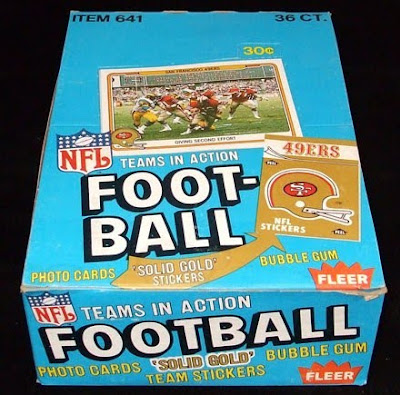 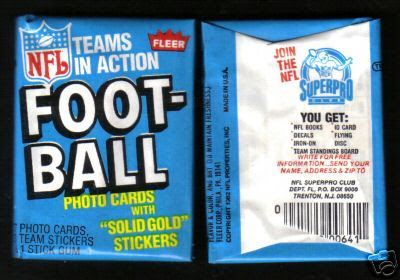 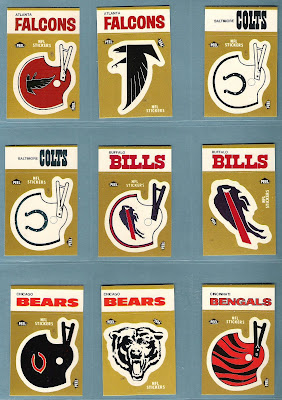 The first variation in the set is one that has been listed in Beckett for years, but which most collectors never understood. Beckett indicates there are "Small Helmet" and "Large Helmet" Colts stickers. For years I tried finding a Colts sticker with a smaller helmet, but was never able to find one. It wasn't until another Fleer collector informed me that it was the team name, not the helmet, that could be found in two different sizes. If you take a look at the scan above, the Colts sticker on the top row has a larger "COLTS" than the sticker on the second row. 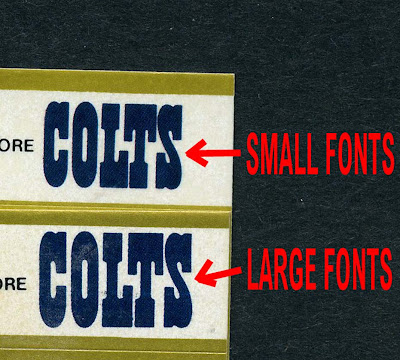 The Bengals helmet appears twice due to a slight difference in the facemask. In the sticker above, the bolt on the left of the facemask has a single white line through the circle whereas the Bengals sticker below has a facemask with a circle with no line through it. 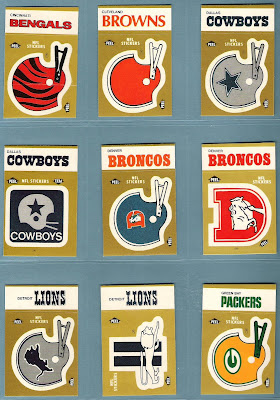 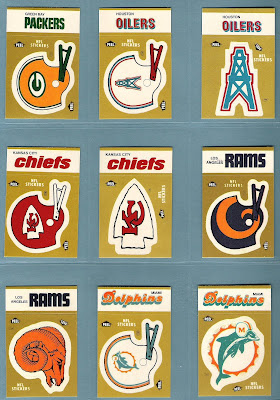 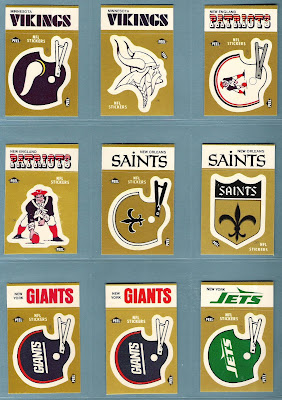 The Giants variation has to do with the TM. The sticker on the left of the bottom row has the TM while the sticker in the middle does not. 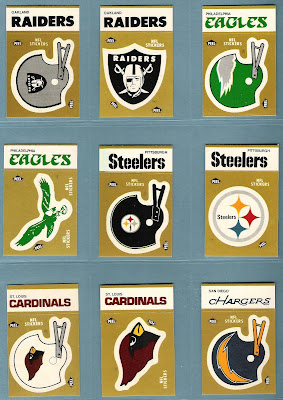 The final variation involves the Seahawks helmet. The sticker on the top row has a light gray helmet while the sticker in the middle row has a darker shade of gray. 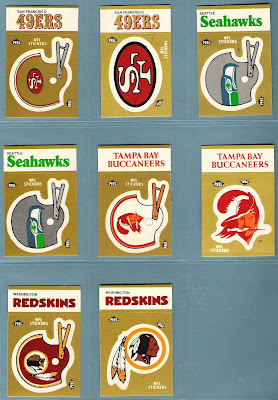 The interesting thing about these 5 variations is that they are also found in the 1983, 1984, and 1985 sticker sets as these sets utlilize the same sticker design.

The backs of the stickers list the team's 1982 schedule and have a place for keeping a record of the scores during the season. 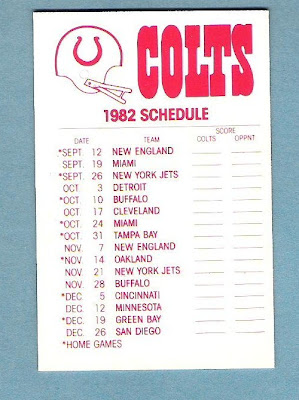 The card set is once again 88 cards as it was in 1981 with the same format of an offensive and defensive card for each team, a subset of all Super Bowls played up to that point, and a subset of various aspects of the game like the shotgun formation and the free kick. Here is a look at the full set: 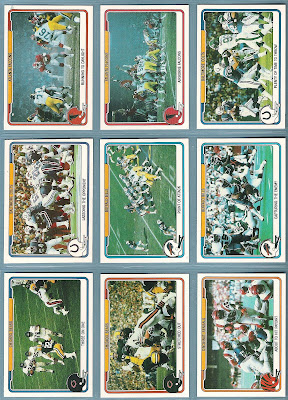 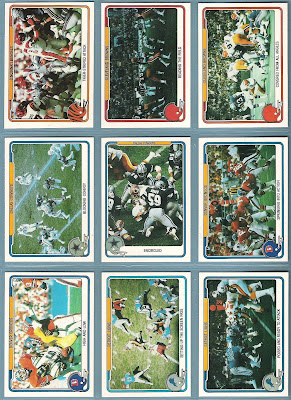 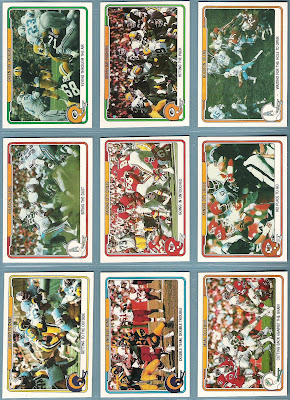 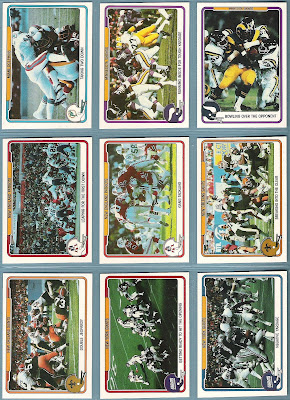 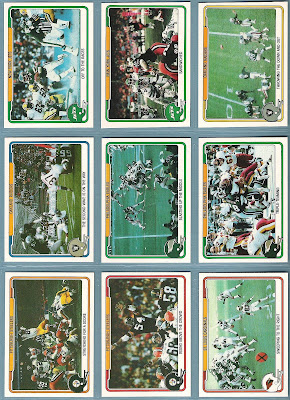 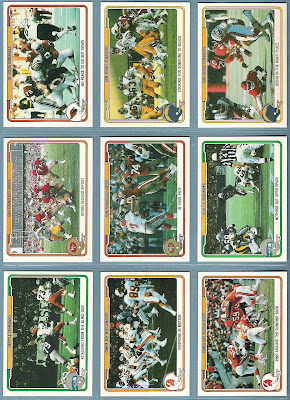 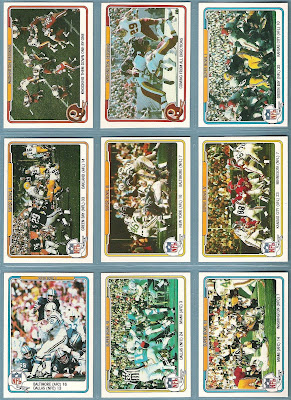 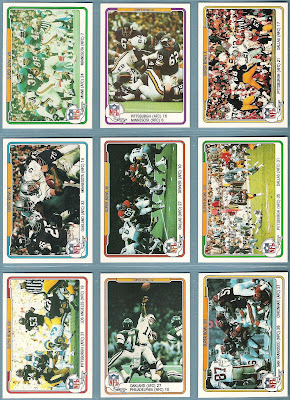 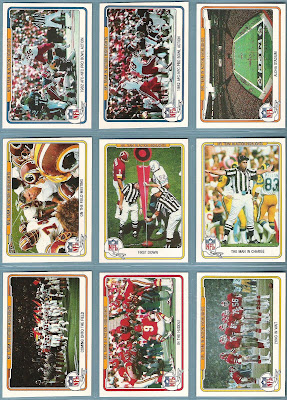 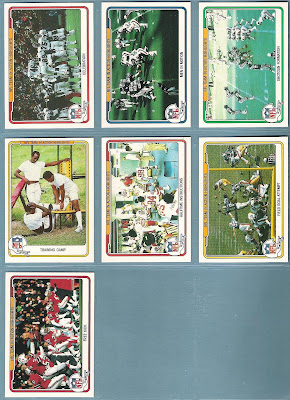 And finally, here is a look a the back of the cards: 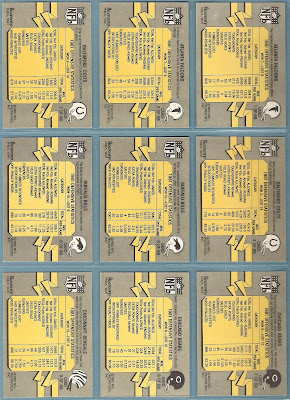