This is the story of how the internet helped me solve the mystery surrounding this photo that my father took which I have determined was taken 50 years to this very day at the NFL Championship game on Sunday, December 27, 1959: 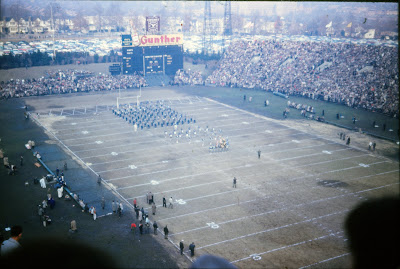 This past summer I was visiting my parents home when I came across a slide with the picture above. I could tell the slide was taken from a Baltimore Colts game at Memorial Stadium, but that was all I could determine.

Unfortunately, there was no notation on the slide as to the date to even give me an idea of what year it had been taken. Since my father passed a number of years ago, I wasn't able to ask him if he remembered what game the photo was from.

As my brother had recently bought a device to convert slides to digital images, he offered to have the slide converted, and later sent me the picture.

When I received the picture, I was able to make out that the Colts were playing the Giants based on the teams listed on the old Memorial Stadium scoreboard. While its not easy to make out all the other games that were listed on the scoreboard, it appeared that there were also the following games played that day: 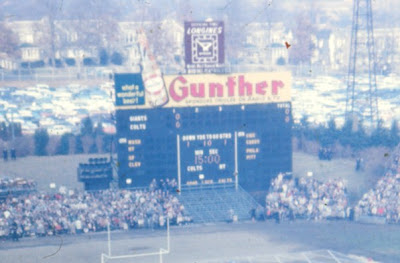 Wash vs. NY (which wouldn’t make sense if the Colts were playing the Giants)

Given I had a slate of games on the scoreboard, I figured there might be a chance for me to do some research to see if I could determine when this game was played, and also figure out why it appears the Giants were playing the Colts, but also listed as the Redskins opponent as well.

Since it looked like the picture would have been taken in the late 1950s / early 1960’s, I started researching the season schedules starting in 1957. After not finding the above combination of games played on the same date in 1957 or 1958, I found this for 1959:

The first 4 games match up exactly with the same matchups and home teams on the scoreboard. But the schedule indicates the Rams played at Baltimore on November 29, not the Giants. I kept looking at the scoreboard, and there is no mistaking that the Giants are the visiting team, so what was going on?

Going back to the 1959 schedule, I took a look at the remaining weeks on the schedule. The following week the Colts played an away game at SFO, and then the week after that was the last game of the regular season, which was also a road game played in LA.

Back in those days there were no playoffs, so the final game played in the 1959 season was the Giants vs. the Colts for the NFL Championship in Baltimore on December 27, in a rematch from the previous season’s Championship game (which would come to be known as The Greatest Game Ever Played).

Could it be that the out of town games from the last regular season home game were simply left up on the scoreboard for a month and not taken down for the Championship game?

That seemed like a plausible theory, but I wanted proof, so I took one again to the internet and did an image search for the 1959 NFL Championship game, and look what I found: 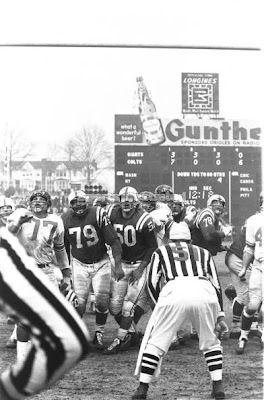 I couldn’t have asked for a better photo! In this picture, you can clearly see the Giants vs the Colts at the top of the scoreboard, along with those regular season games (Wash vs. NY, CHIC vs. Cards, Phila vs Pitt) from November 29.

Finding this photo gave me proof that the slide I found was a picture my father took 50 years ago today at the 1959 NFL Championship Game, which the Colts ultimately won 31 - 16. 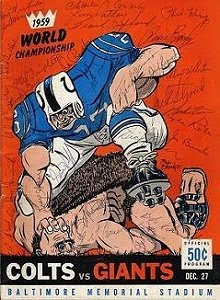 Unfortunately this was the only slide I found from the game, and its actually taken during the pregame ceremonies with the Baltimore Colts Marching Band. Here is a photo from a 1963 Colts program giving a better view of the Band in a formation very similar to my father's picture: 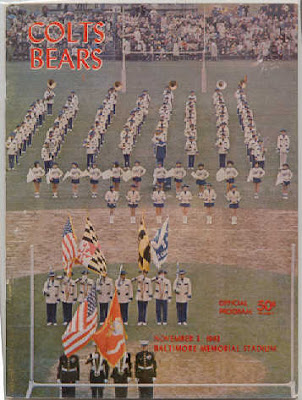 On a side note, speaking of the Baltimore Colts Marching Band, the ESPN 30 for 30 series did a great documentary on the Band directed by Barry Levinson called The Band That Wouldn’t Die which told the story of how they continued to perform after the team snuck out of Baltimore and ultimately became the Ravens Marching Band. I highly recommend the film if you get the chance to see it.

In searching for pictures from the 1959 NFL Championship game, I didn't find any color pictures as everything was B&W. 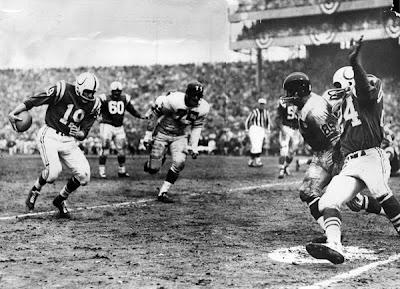 Even though my father's photo doesn't contain any game action itself, at least at this point, it seems to be the only color picture available from the game.

I'm very glad my father had his camera with him that day to take this picture as it provides a great look at how Memorial Stadium looked at that time as well as provides a glimpse at how simple the pregame ceremony for the Championship game was like then compared to what its become today: 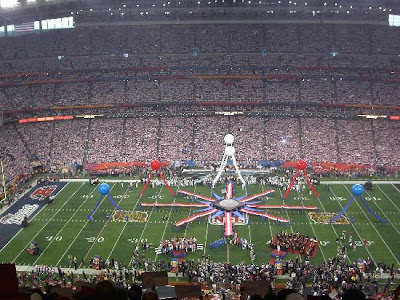 My how times have changed!

Thanks to John for sending me this picture which shows the scene at the end of the 1959 NFL Championship Game with the fans on the field celebrating the Colts victory: 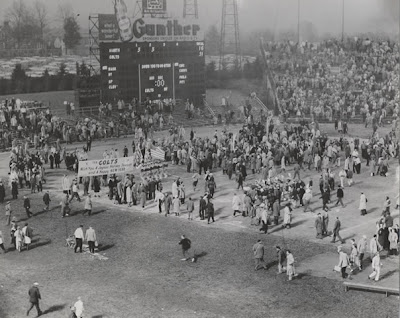 This picture comes from this photo gallery from the book The Cowgirl and The Colts by Paul J Tavers.

It provides a nice "after" shot from the game to go along with the "before" shot that my father took before the start of the game.
Posted by Fleerfan at 10:49 PM

Great detective work! I'm glad I could contribute, and I'd encourage anyone who has a bunch of slides like we did to get a slide scanner and take a walk down memory lane.

Dad's stories of the Colts Corral made it sound like they were a huge part of the game and fan experience.

Great story! Thanks for sharing!

That's a great story! It's cool to find old photos especially when they are from your own family. Nice detective work too.