Getting back to our look at the trend that Donruss started in 1985 with putting cards on the bottom of their wax boxes, Donruss continued the practice in 1986: 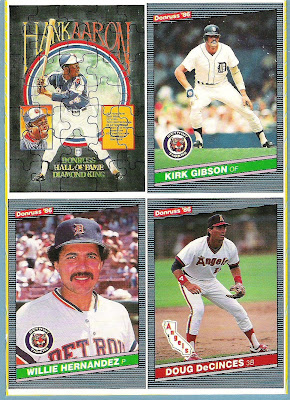 Once again Donruss created a card of the completed puzzle that was used as the insert in 1986 Donruss packs with this year's puzzle featuring Hank Aaron. 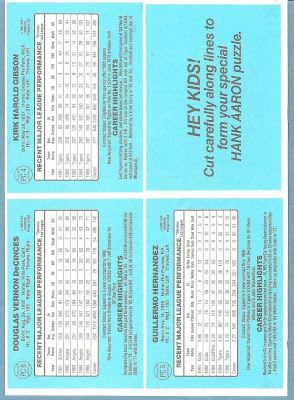 with the puzzle card being unnumbered (because Donruss wanted kids to "carefully cut along the lines to form your special Hank Aaron puzzle").

Apparently Donruss thought Kirk Gibson and Doug DeCinces were the key stars of the day since not only were they on the box bottom, they were also on the box top: 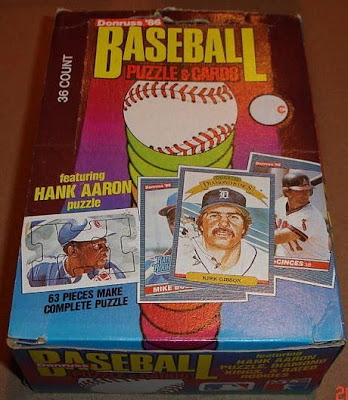 However.... not being content to just put cards on the bottom of their base brand, Donruss extended the box bottom card idea to their other major offering that year - the 1986 Donruss All Stars / Pop Up set: 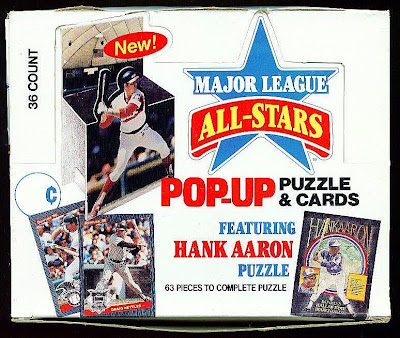 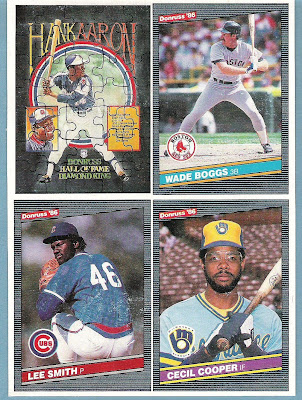 and they continue the numbering system with cards PC7 - PC9: 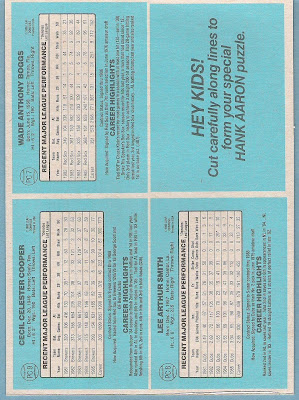 One thing I find interesting about these panels is the player selection. You would think that either Don Mattingly or Daryl Strawberry would have shown up on one of the panels as those were two of the players that were driving the card market around this time (until everyone starting going crazy looking for 1986 Donruss Jose Canseco rookies shortly after these cards were issued).
Posted by Fleerfan at 9:42 PM

Nice post. I was 15-16 at the time these came out. There was a real WTF? moment at the player selection at the time of release.

Looking back now I wonder if it had to with paying the players extra to be on the box, as in advertising?

I think you're leaving out the most fascinating part of this the 1986 Donruss box.

Who is the phantom Rated Rookie on the top? He's not one of the 1986 Donruss Rated Rookies. The only players in pro ball in 1985 with a name starting with "Mike Bo-" were:

Mike Boddicker - already an established pitcher at that time.

Mike Botkin - A 12th round pick, no-speed, no-power outfielder for the Astros who retired after the 1985 season.

Mike Bormann - An undrafted free agent signed by the Braves who petered out of the minors after 1985 as a 24 year old reliever in A-ball.

So who is the mystery player?