The Topps Vault continues to deliver some great photos. Currently up for auction is a picture of Dr. J in an Atlanta Hawks uniform: 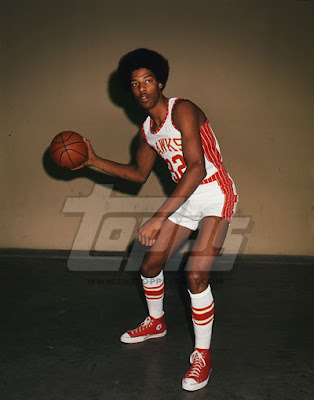 After playing for the Virgina Squires in the ABA in 1971, Julius Erving was eligible for the NBA draft in 1972 (as that is when his college class would have graduated and he would have been considered eligble by NBA rules at the time). He was drafted by the Milwaukee Bucks (where he would have teamed up with Kareem Abdul-Jabar), but instead signed with the Atlanta Hawks (where he was teamed with Pete Maravich). Dr. J attended the Hawks preseason camp and played 3 exhibition games before having to return to the Virgina Squires due to a legal injunction. Since he was only on the Hawks a short time, there are not many photos of him on the Hawks which is why this Topps photo is such a great shot.

Fortunately for the ABA, Erving was forced to return to the league were he became a superstar and ultimately helped bring about the ABA-NBA merger. Had Dr. J been allowed to go to the NBA, its interesting to wonder whether the merger ever would have happened, or if the ABA would have simply faded away without the attention that he brought to the league.

Speaking of the Squires, here is a picture of Dr. J on the Squires with their pinstriped warmup pants: 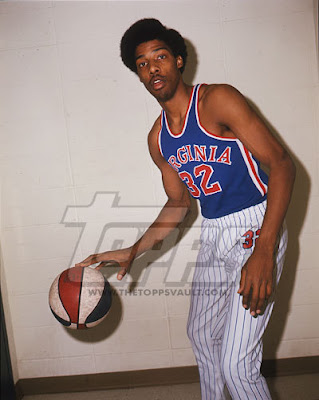 While on the Squires in 1972, Dr. J played with The Iceman George Gervin 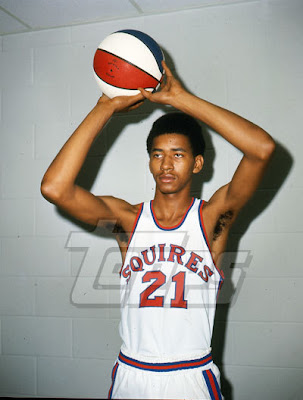 before Gervin joined the Spurs 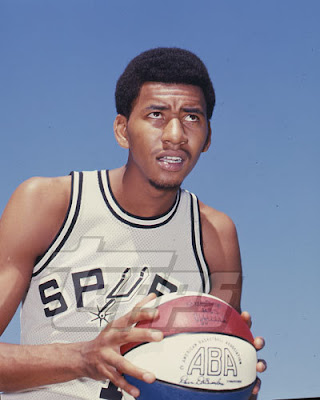 While we are taking a look at some old ABA photos, it doesn't get any more '70s than this: 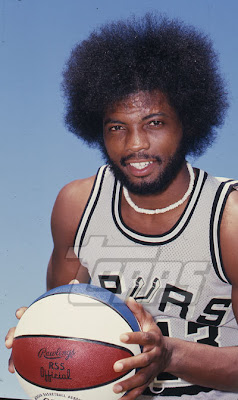 James Silas
While the ABA had style and flash, the NBA was seen as the more boring league: 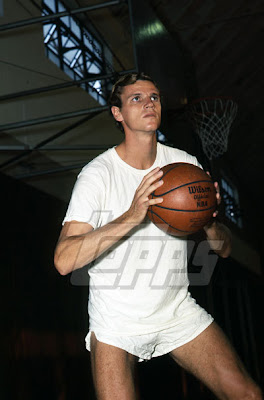 This shot of Keith Erickson of the Lakers looks like he's practicing in his undershirt and boxers. I guess Keith didn't get the memo about picture day.

One of the interesting things about looking through the Basketball photos is that very few seem to be actually taken on a basketball court. Perhaps it was due to the lighting, but it looks like the Topps photographers would simply have guys pose in a basement 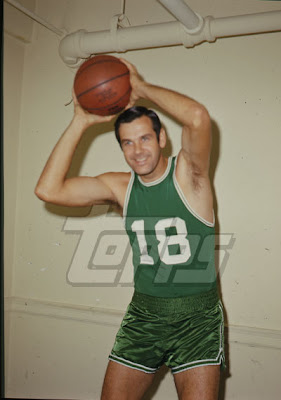 Baily Howell
or in a hallway 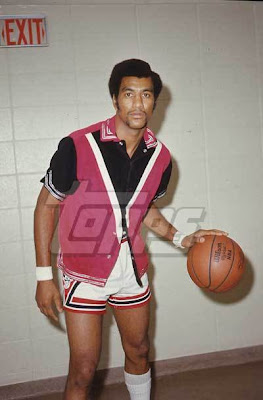 Norman Van Lier
or go outside 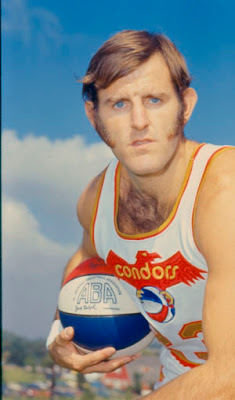 Skeeter Swift
I especially like this picture of Cazzie Russell dribbling on the grass: 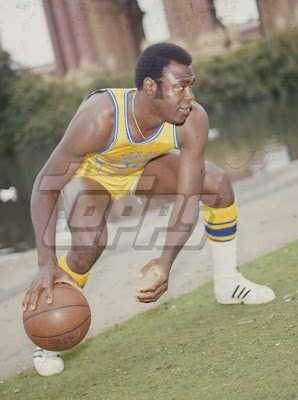 To wrap up today's look at some great photos that have been hidden in the Topps Vault, here is a picture of The Logo Jerry West actually on a court, but against a white backdrop: 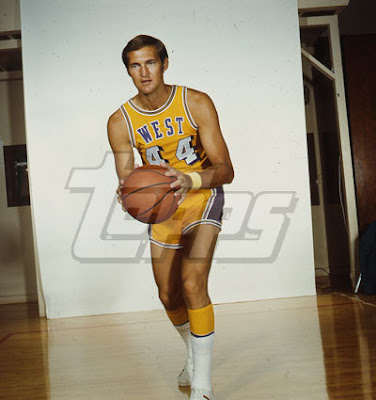 That Cazzie Russell photo was definitely taken across the lagoon from the Palace of Fine Arts in SF. Which is kind of funny because by the time Cazzie was a Warrior they were playing their games in Oakland.

Notice on the Topps NBA cards, many of them (like the West card) have their jerseys on backwards....probably didn't have the rights to use the logos that way.

Great pictures and really funny. I've never seen a Dr J Hawk photo. I think his Squire rookie card he was wearing a red jersey so the blue jersey is different. I have seen some ABA outdoor photos before , but they are really a departure from the norm.

Great Pics! The POSE is a vintage as these photos. Now they have to be posterizing someone!

These shots are great. I think someone must have played a prank on Erickson. The basement shots are classic too.

ecloy: Yes, i think that was exactly the case with the 1969-early 70s Topps basketball cards, they did not have the right (at least for a season or two) to use team logos or nicknames. The first "tall boy" set (1969-70, IIRC) had only city names on the card captions..."Detroit," "Boston," "Los Angeles" and no "Pistons," "Celtics," or "Lakers." This also accounts for many team's players (Lakers and Knicks are two that come to mind) wearing jerseys backwards so that the player's name and not the team name/wordmark on the front of the jersey was visible. Also, some cards do show players wearing very generic t-shirts/jerseys/shorts...maybe not quite as generic as what Erickson is wearing here, but still a far cry from what they'd wear on game days.

of course, football fans who collected Topps in the 1970s will recall the airbrushing out of helmet logos. same thing, Topps did not have the rights to show the logos.