For Christmas this year, the kids got NFL logo versions of the popular kids fad Silly Bandz: 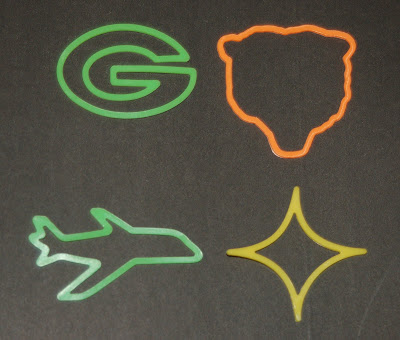 The elastic bracelets are not actually produced by the Silly Bandz company, but by Forever Collectibles. There are separate packages of AFC and NFC teams: 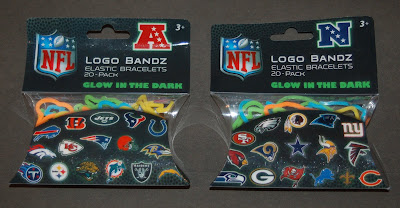 The NFC teams are pretty easy to make out for the most part - the Redskins on the top row are the only one that isn't easily recognizable since its just the name: 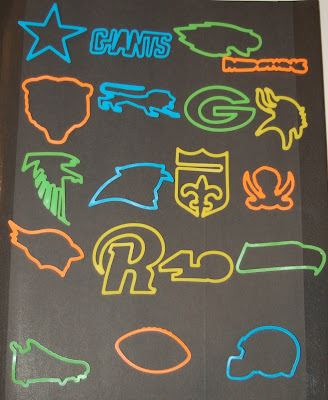 The AFC teams are more interesting, as they went back to the AFL days for a few of the teams: 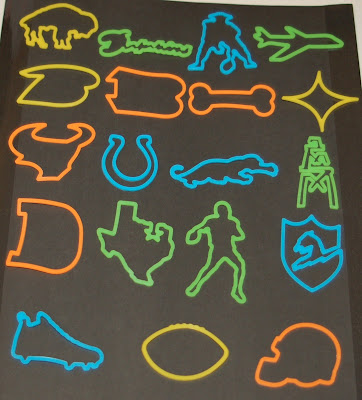 The Tennessee Titans are represented by the Houston Oilers derrick, and the Kansas City Chiefs are represented by the old Dallas Texans logo. In addition, they used Pat Patriot instead of the "flying Elvis", Buffalo uses the original standing Buffalo instead of the current helmet design, and Devner uses the old school "D" instead of the current Bronco on the helmet. I have no idea how the green football player is supposed to represent the Raiders, but he is the only band left after accounting for the other teams and the couple of bands that show equipment.

I'm not sure how the kids that these are aimed towards will get the AFL references. I can just imagine a kid in Kansas City getting a package of these and being excited to get the Chiefs logo only to discover its not in there.

They also got creative with the Browns using a bone for the "Dawg Pound", which I thought was a nice touch.

If you are interested in looking for these, we found them at Dick's Sporting Goods.
Posted by Fleerfan at 9:48 PM