The Coolest Baseball Card of All Time - International Update

For those of you who've been reading my blog since I got started, you may recall one of my early posts on The Coolest Baseball Card of All Time: 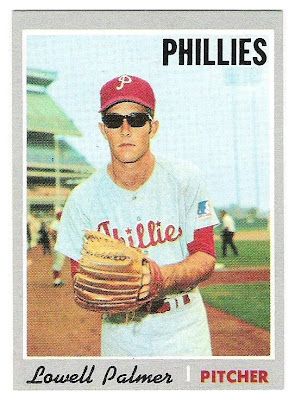 Well, I've just found another card that adds to the incredible legend that is Lowell Palmer. All the way from Venezuela, I present to you: 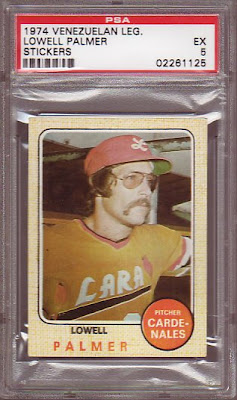 The "card" is actually a blank backed sticker. Here is Lowell with his best '70s Fu Manchu mustache and he's still got his shades. It looks like Lowell was playing some winter ball for the Lara Cardinales back in the mid 1970s.

I've done a bit more digging around on Lowell Palmer, and have found out a number of interesting things about the man behind the shades.

Here is his page from the 1970 Phillies Yearbook with some interesting information: 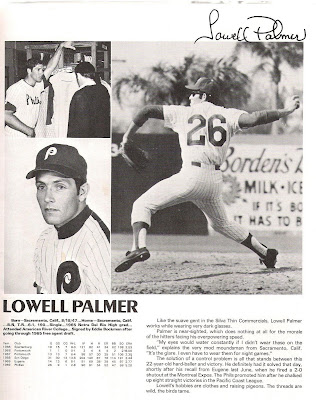 Apparently Lowell wore the shades as his eyes were very sensitive to glare. He says he even has to wear them for night games. Lowell also apparently was a man of fashion, as one of his hobbies is "clothes". The other hobby is pigeons: 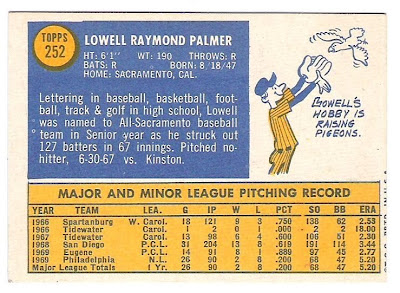 As the Yearbook says, "the threads are wild, the birds are tame."

Lowell's 1972 card mentions that Lowell was also a private detective. 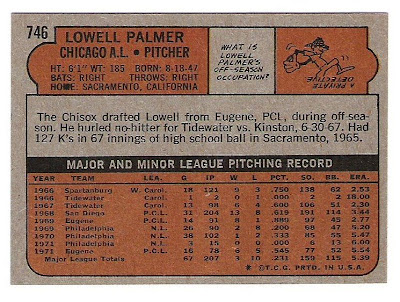 So was Lowell Palmer the original International Man of Mystery? He likes "birds" (he tried to ask Phillies manager Gene Mauch's daughter on a date and found himself sent back to the minors the next day!), wild clothes, drives an "expensive sports car" (see story below), and is a detective!

No wait, he's the villian who tried to kill James Bond in Thunderball: 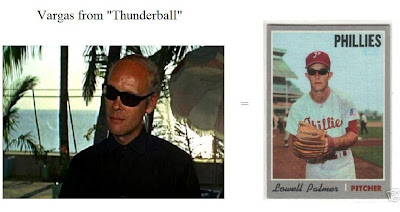 Getting back to Lowell's playing career, he was also in the Army Reserve, which may have hurt his chances with the Cardinals (after he was traded from the White Sox in 1972) since he had to be on active duty right when he joined the team. He only lasted 16 appearances with the Cardinals before being traded to the Indians (click on the article to have it open up in a new window):

The article mentions that Lowell had thought about quitting baseball in 1969. Thank goodness he didn't, or we never would have seen the picture from this negative make its way onto cardboard the following season: 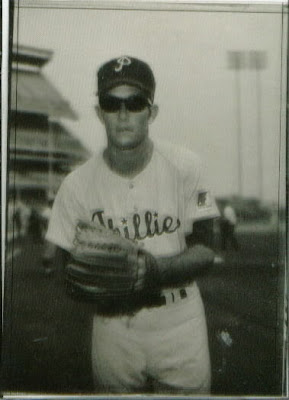 Lowell later ended up in Time Magazine in 1973 when he was included in a trade for Mike Kekich, one of the wife swapping Yankees:

"The most unique trade in baseball history," Susanne had gigglingly called it when the press learned that her husband, Yankee Pitcher Mike Kekich, and his best buddy, Yankee Pitcher Fritz Peterson, had exchanged wives. The new arrangement did not take, and Mike ended up losing not only Susanne, his kids, Fritz and Fritz's wife—but his dog as well. The final blow: Mike himself was bartered last week to the Cleveland Indians for Minor League Pitcher Lowell Palmer.

Here's the link to the Time Magazine archive:

Lowell had a reputation for wild pitches, which he freely admits to at the end of this 1974 article : 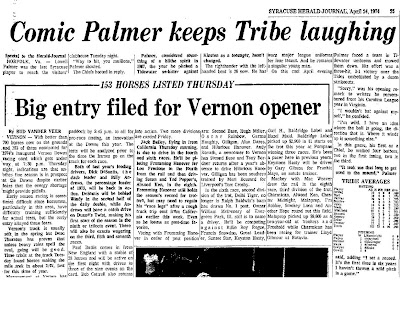 Lowell also apparently drove "an expensive sports car" that a "lady friend" totaled before he had to pitch the 2nd game of a double header: 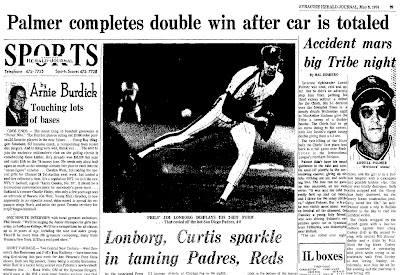 After trying to make it back to the big leagues for a few years, Lowell finally gave up baseball in 1975 to play football (both defensive end & punter):

Even though he switched over to Football, Lowell's passion for the game of baseball never wavered. Lowell came back one last time as a member of the Senior Professional Baseball Association (SPBA) which was a league of retired players that formed in 1989 but only lasted through 1990.

Lowell was able to make it back on to a baseball card one last time so we could once again see him in those shades (almost replicating his pose from the 1970 card): 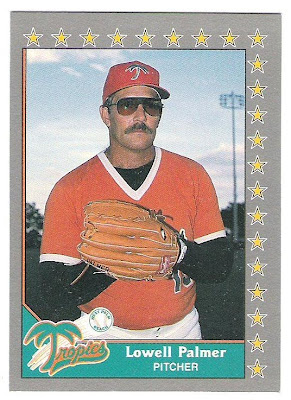 Even though Lowell never had the success I'm sure he was looking to achieve, the fact that his 1970 card is considered a well known baseball card image (as his Wikipedia entry indicates: "Palmer was renowned for wearing dark sunglasses while pitching and his baseball cards are considered classics") ensures that he won't soon be forgotten by card collectors.
Posted by Fleerfan at 7:26 PM

With the dark shades, he looks like the police sketch of D.B. Cooper

Oh my God! He is wearing the infamous "hot dog" Cardenales de Lara uniform (mustard yellow suits, red caps and brims)... HOF Luis Aparicio was player/manager for the Cardenales during this time...

OMG! I'm so thrilled to see this. I went on a few dates with Lowell in 1974. He's a hard man to forget! We lost touch so I'm thrilled to read about him here. I can attest to his fashions. That's just one of the things that attracted me to him! What's he doing today, anyone know?

Happy Birthday to you, Lowell ("be there before the third inning") Palmer! Thanks again for those Phils' tickets in 1970.

You bet he's a hard man to forget! I too went on a just a couple of dates with Lowell, in 1970 then ran into him 4 years later in the lobby of the Queen Elizabeth hotel in Montreal. He approached me saying I don't remember your name, I don't remember the city, but I NEVER forget a leg. Classic Lowell Palmer.

I like the post about D.B. Cooper. He did spend a couple of seasons in Eugene during that time.

I just found this page and immediately called Lowell to tell him about it. I love the D.B. Cooper reference. He thought it was hilarious. He hasn't changed a bit and yes he is still wearing shades.

Thanks for letting Lowell know about the post. I'm glad to hear that he enjoyed the article.

How is he doing these days? As he may have seen in the comments, he left a memorable impression on at least a few ladies who have fond recollections of spending time with him.

I have been playing Senior Tournament Softball with Lowell for the past ten years.He plays for a team called First Draft out of Placerville ,California.We mostly play all over Northern California.It has been a real treat playing ball with him as you can imagine all the hilarious stories he has to tell.

I've been playing Senior Tournament Softball with Lowell for the last 10 years.He plays for a team out of Placerville,California called First Draft.We play all over No.California.It has been a real treat playing ball with Lowell(we call him Floyd,because he looks like a Floyd) as you can imagine all the hilarious stories he has to tell.Can't wait to show everyone this article.

Hi there, my name's Graham Womack, and I'm the founder and editor of baseballpastandpresent.com

I read your comment on sacbee.com about contacting you to do an accurate, in-depth story on Lowell Palmer. Here I am.

I love writing about baseball history and Sacramento, since I grew up there. My folks also still live in town, so it's always nice to have an excuse to pop home and visit them.

You can find my email address on my site if you'd like to talk more. Thanks regardless.

I love this article! I've come across the card before (the initial card that sparked the article), but haven't seen the others--hilarious. Also LOVE that people who know him have commented on this! Very cool and nicely done.

Dave Hoene,in 92 I played for Lowells over 40 Athletics team in Sacramento Ca.Great bunch of guys and Lowell was fun to play for.I will always remember those days.

Happy 68th Birthday, Lowell!! Traded by many remembered by few. From your #1 Phillies fan.

Happy Birthday Lowell. This is Cynthia Martin form Sacramento where you made your start and I think you are still around. Playing ball? Let me know what you are up to? HAPPY BIRTHDAY.
(916) 968-6143

If you look at Montreal Gazette archives (access through Wikipedia) for June 30 1969 you will see LEANNE MAUCH CHOSE WINNER. She had a Saturday night date with Lowell Palmer and then sat with him in the stands during game 2 of the doubleheader after he beat the Expos 2-0 in Game 1. I remember attending this doubleheader at Parc Jarry.

Thanks for confirming the story about Lowell having a date with Gene Mauch's daughter!

He is my neighbor. Lives in Sacramento.

That is awesome! Please tell him The Fleer Sticker Project says Hi!