I recently had the chance to return to my childhood home to visit my family, and discovered where I left my Fleer baseball and football stickers: 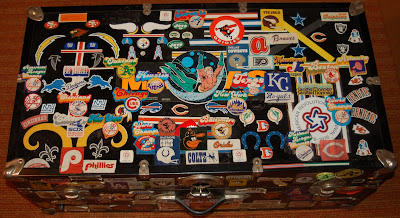 This was a trunk that I used to store some of my baseball and football cards in which I decorated with stickers during the mid to late 1970's. 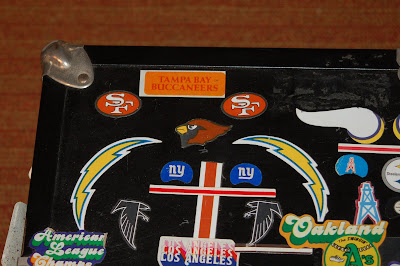 In addition to Fleer stickers such as the Tampa Bay Buccaneers and Oakland A's as seen above, the trunk has some stickers that went on gumball football helmets (like the Giants and Oilers stickers), as well as helmet decals (like the Chargers lightning bolts) from the larger football helmets like this: 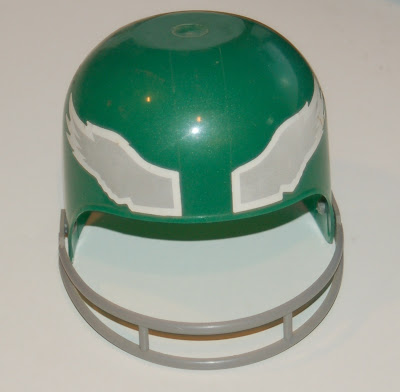 Here is a picture of a decal sheet for those larger helmets that is similar to what I would have had, but my sheet was likely from 1975 as I don't have any Seahawks or Buccaneers helmet decals on the trunk: 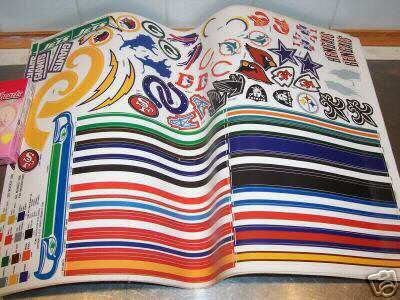 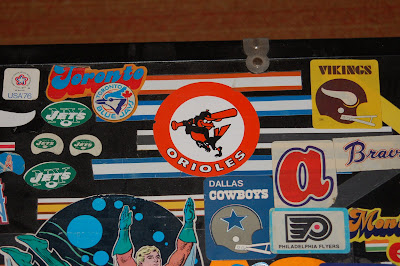 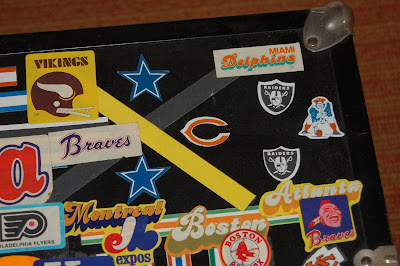 Based on the Bicentennial sticker, it looks like I was working on this project in 1976 with additional stickers such as the Yankees World Champs from either the 1978 or 1979 Fleer set being added later: 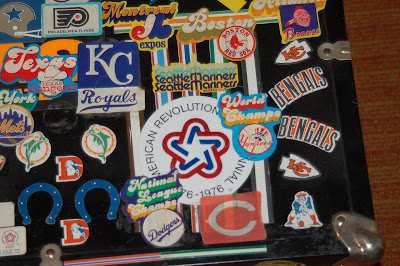 I've got my Baltimore teams placed together along with an Orioles magnet. Also a Reds World Champs sticker from the 1977 Fleer sticker set and more bicentennial stickers: 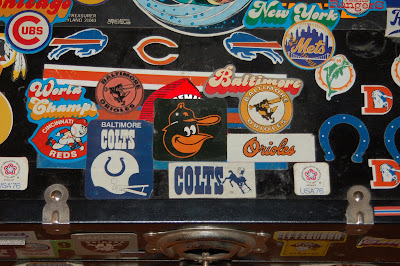 I think the Reds cloth patch in the bottom left corner was a miscut that I used to fill in that section. The "NY" Giants stickers give another clue that the helmet sticker sheet I used was probably from 1975. 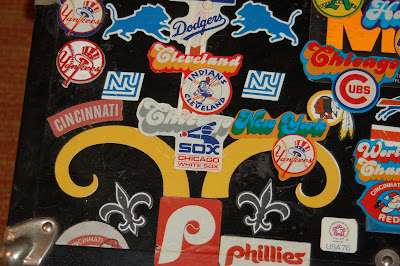 One superhero made it on to the trunk - Aquaman: 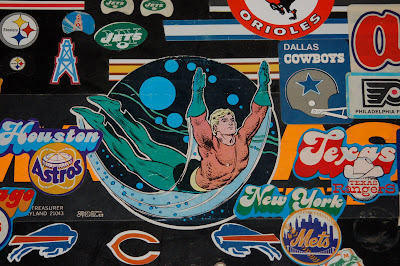 Here is an unopened pack of Super Friend stick-ons, which is where I would have gotten this sticker: 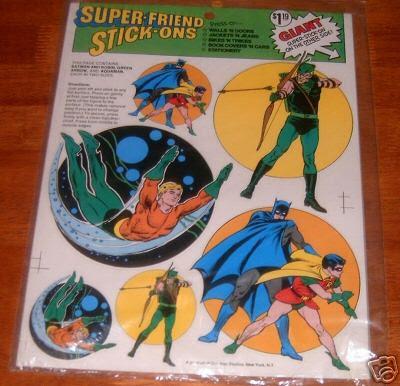 Here is a view of the front of the trunk:

Moving in for a closer look, we've got another miscut cloth patch - this time it is the Astros. I also stuck a few Topps Hockey stickers: 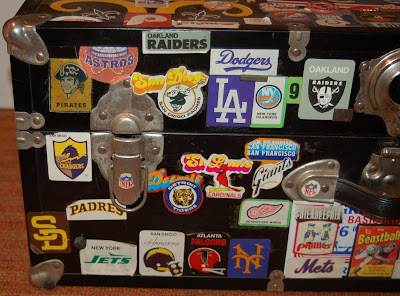 Of course, I had to get at least one Wacky Package (Beastball) on the trunk. The trunk, afterall, was for my baseball cards: 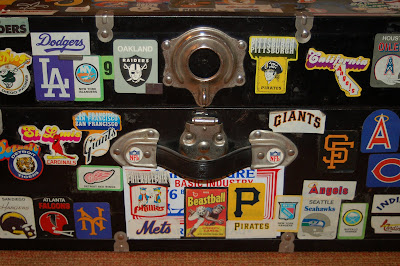 I even managed to stick a Monster Initial sticker in the bottom corner. I wish I could remember where the A's sticker came from. Its not a Fleer sticker. I believe it came in a Kellogg's product, but I'm not certain. 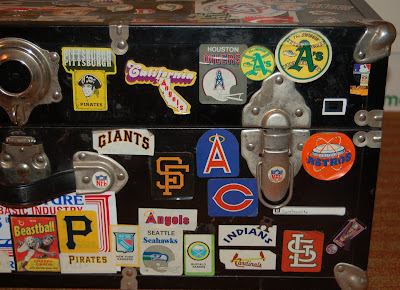 Now for a look at the sides. Remember Eastern Airlines? 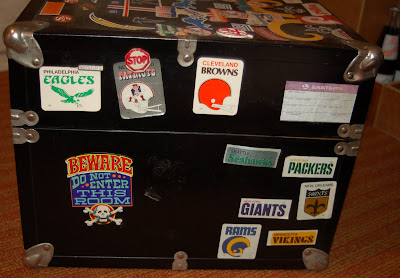 As for the other side, its got some bumper stickers from my favorite radio station at the time - WZYQ, otherwise known as 14ZYQ, and later as Z-104. 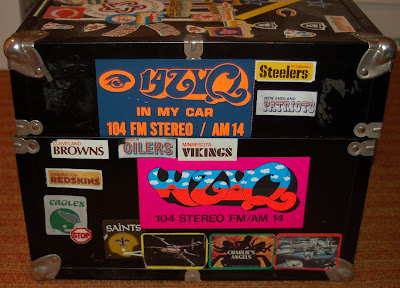 I also had some room for Star Wars and Charlies Angels stickers as well.

There were no stickers on the back of the trunk, presumably because it was up against a wall and you would not have been able to see the back.

I think the trunk pretty well sums up why 30 years later I'm blogging about stickers!
Posted by Fleerfan at 8:00 PM

My brother and I had a chest much like that. It was full of his toys, and I decorated it with stickers. If I recall, it was mostly Wacky Packages, but I know I had some monsters in souped-up vehicles, too. I suspect the chest got tossed when my parents converted our bedroom to a TV room.

Thanks for sharing this. I am sure it brings back great memories. I like the Aqua Man sticker, but we always thought that the SubMariner would beat him in a fight. Do you remember when bananas came with NFL logo stickers? It was in the early 1970's.

That is a well traveled trunk! I remember those "mini" helmets. I forget which year but here in the DC area It was either the Roy Rogers restaurants or Hot Shoppes Jr.s that had those (I thought it was RR) I still have about 5 or 6 of those helmets somewhere, most likely on the head of a small stuffed animal. LOL.I don't think I have the label sheet anymore.

That Monster Letters may have been from the Topps "Monster Initials" from 73-74 I found a website for them http://www.bubblegumcards.org/Monster_Initials.html They have been produced a couple of times once as it's own set and once as part of another monster set.

It's amazing how well those stickers have stayed on all these years. Much better glue back in those days. I still have stickers on card boxes from the 70's too. But never any trunks.....?

I used to keep cards in boxes from English Leather aftershave, and had stickers all over those!