After the run of 3 series of Crazy Magazine Covers in 1973 - 1974, Fleer returned in 1979 with a set of package parody stickers called Crazy Labels: 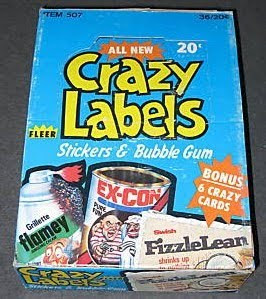 The artwork is much improved over the quality found in the Crazy Covers sets. Though not as well done as most Wacky Package artwork, these are still a significant upgrade over Fleer's earlier effort.

While there are 64 titles in the set, a full master set actually comprises 72 stickers due to some titles being replaced during a second print run, presumably due to cease and desist orders.

The cards feature a sticker on the front, and a picture of one of the other titles on the back, which makes for a very odd numbering system, as the numbers are not the same on both sides.

For example, sticker # 1 in the set 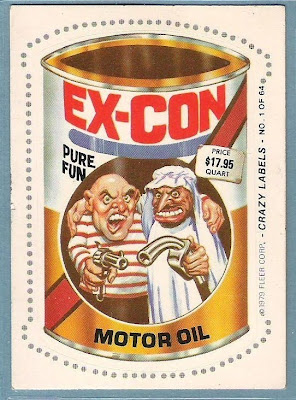 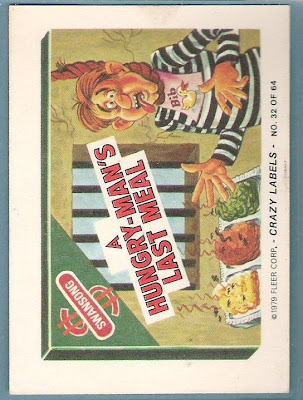 The sticker side has an outline of grey dots around the sticker, while the backs do not have the outline which is how you can quickly tell which side you are looking at. Why Fleer didn't just print the same title on both sides to keep the numbering consistent is a mystery. If they would have done that, you could have peeled the sticker and still had the same image on the back of the card to save for your collection.

Here is a look at the set, including the variations: 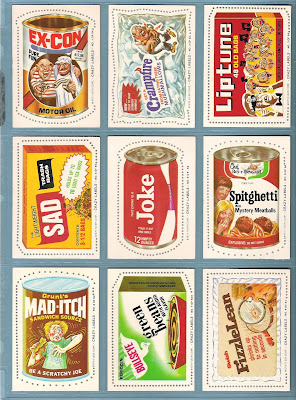 There are 2 different #6 stickers as Spitghetti was replaced by Mad-Itch. 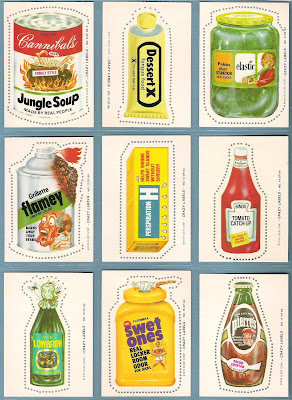 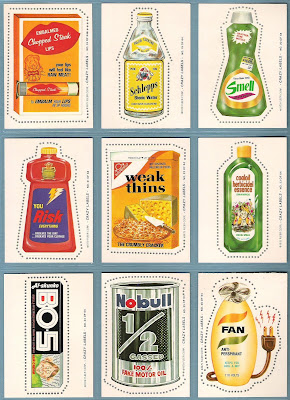 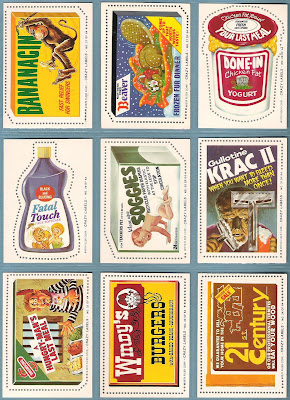 There are 2 different # 27 stickers as Bananacin was replaced by Beaver Frozen Fur Dinner (and it just so happens that Bananacin had Spitghetti on the back, so the back was also changed to Mad-Itch for the revised Beaver sticker). 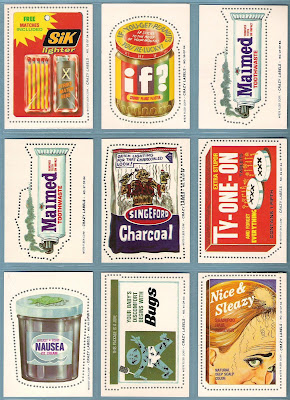 The reason #37 appears twice with the same sticker is due to the fact there are 2 different backs. The backs for the Maimed sticker feature sticker # 57 which changed . 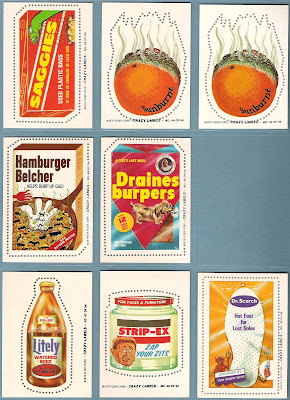 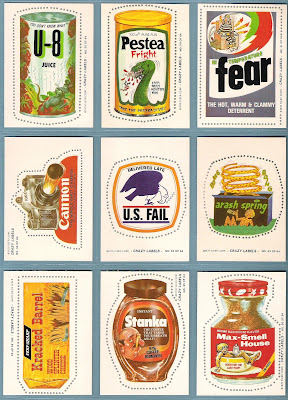 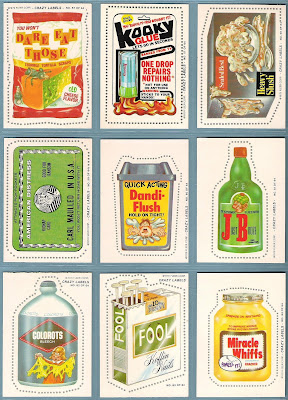 The final variation involves sticker # 57 which changed from Dare Eat Those to Kooky Glue.

When the series was first released, there were 2 wrapper variations: 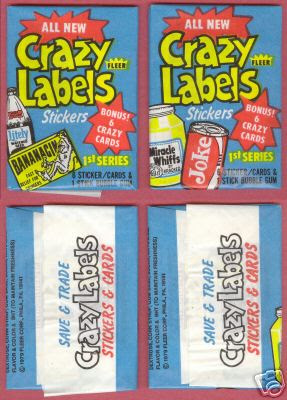 Since one of the deleted titles (Bananacin) was on one of the wrappers however, when the 2nd printing was done, that wrapper had to be changed (with Windys taking its place): 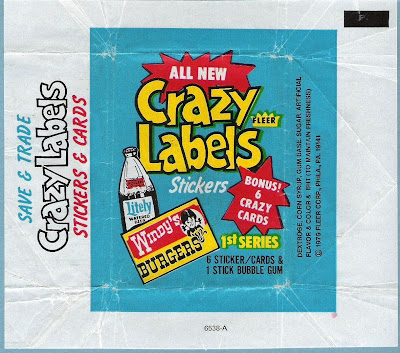 so there are actually 3 different wrappers.

The original box also featured 2 of the deleted titles: 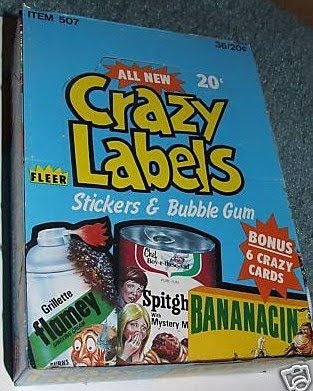 which had to be replaced

so there are 2 different boxes as well.

The timing of this release is interesting as it was released the same year that Topps started a series of reissues of the original Wacky Packages. In 1979 Topps issued the first of what would turn out to be 4 series of reprints of titles from the original 16 series: 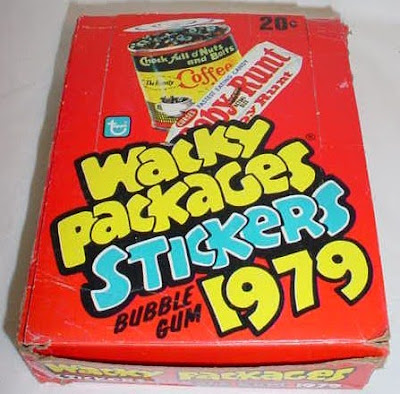 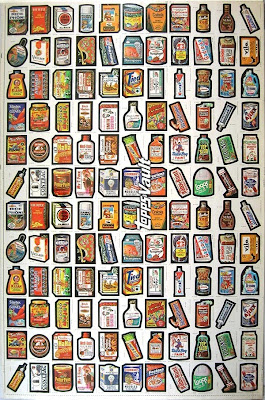 I'm not sure if one company knew what the other was up to, or whether one company followed the other after they released their set, but I find it interesting that both companies issued product parody stickers the same year after neither company had done so for a few years.

Was this a case of Fleer once again trying to capitalize on the popularity of Wacky Packages after Topps brought them back, or is the fact that Fleer's stickers were at least new original titles and Topps' offering was a set of reprints an indication that Topps was actually responding to Fleer this time around?
Posted by Fleerfan at 9:03 PM

This is so awesome !!

Are you still looking for the 46 card with a different backing? If so, I think I can help. Which backing? You can send private e-mail to:

Great information in regards to the 1979 Crazy Labels. I'm a very big fan / serious collector / buyer of these crazy label wax boxes. Especially, the 2nd printing box with the "Windy's Burgers," and the "Miracle Whiffs" on the wrapper.

I'm a bit confused. Most of you who appreciate these cards are aware that they are not that popular such as wacky packages and so forth. That being said, there's not much "solid or even at time reliable information in respect to the different card variations.

I do believe I have all the card variations, and some beautiful pack fresh dupes if anyone may need a particular card then possibly I can help you. No charge. Many of you I'm sure are aware of another site that seems to have reliable info. I put the link to this one card, and I don't know if this variation even exists. The "Beaver Frozen Fur," sticker side, and "Spigetti on the bacside ? Is there a legit card like this? I saw it on the TCDB site when I googled 1979 Crazy Labels. There is an errors / variations you can click on and it lists 17 variations with pic of the fron and back. I left the link here. Don't know if it will take you there. If anyone would be gracious enough to reach out to me and let me know what's what sort of speak. I would appreciate it. Please email me at robertkaraszi@twc.com I have issues with gmail, but if I must use it I can figure out a way.

Is there a crazy label card that has the, "Beaver Frozen Fur," sticker side, and on the backside "Spighetti"? I saw it on the TCDB site. They list 17 card variations. And I'm big into Crazy Labels, and I don't know if that is a fake or it's a legit card?

If anyone would be kind enough to let me know asap I'd appreciate it. I also, have some hard to find beautiful pack fresh dupes. Many from the 2nd printing. FREE and FREE shipping. I'm not kidding. Hope to hear from one of you 1979 Crazy Label fans. Much appreciated.

The listing for 27a on TCDB appears to be an error. Since both Banancin and Spitghetti were replaced in the 2nd printing with Beaver Frozen Fur and Mad Itch, it is very doubtful that there is a sticker with a 2nd printing front and 1st printing title that was removed for the 2nd printing on the back. It looks like the same picture is used for the back of Spitghetti for both 27a and 27c variations on TCDB, so I'm almost certain its an erroneous listing.