One question that has puzzled collectors who are working on the 1971 Fleer World Series set is when and where the 7 "update" cards depicting the 1971 through 1977 World Series (that have the same design and continue the numbering from the 1971 set [#69 - #75]) came from.

Since the 1971 Fleer World Series set only included cards up through the previous season's World Series (1970), where did this card come from? 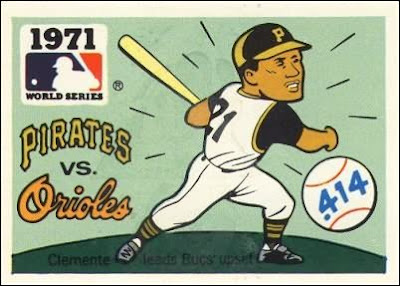 Thanks to the Troy Files, we have the answer, directly from the artist Bob Laughlin himself! 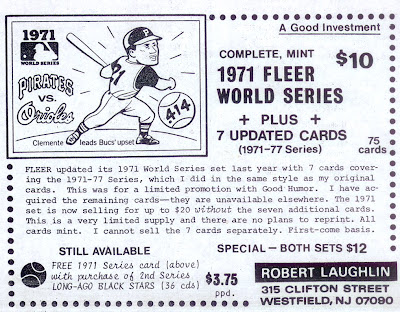 This ad appeared in the March 15, 1979 issue of Sports Collectors Digest, and explains that the 1971-1977 cards were done for a promotion with Good Humor. The original set of 68 cards was reprinted and the additional 7 cards were created to bring the set up to date for the summer of 1978 when these would have been available from the Good Humor Man. Unfortunately I don't know how they were packaged as I've never seen a wrapper.

It appears that Bob Laughlin acquired the remaining stock of cards after the promotion, and was selling the sets in early 1979. Bob's ad is correct - these were definitely a good investment as the update cards from 1971-1977 are very difficult (and expensive) to find today. 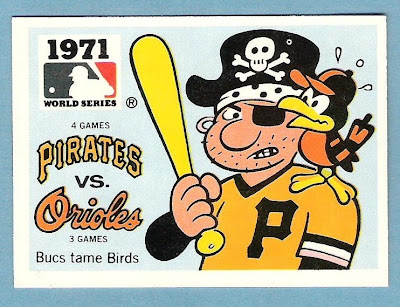 Presumably because Fleer didn't want to pay the Clemente estate for using his likeness, they created a generic Pirate for the 1971 card when they issued their last version of the World Series cards on the backs of their 1980 baseball stickers.

Its been 30 years now since Fleer issued their final set of World Series cards. Its too bad they are no longer around to do another update as it would be great to see all of the World Series since 1979 depicted in a similar fashion to R. G. Lauglin's classic cards.

I'd like to say thanks to Troy for sharing another great item from his files!
Posted by Fleerfan at 8:15 PM

Very cool nice to finally know. I had thought they were inserted once a year in other Fleer products. Glad to have the scoop (pardon the pun).