Fleer issued its final set of NBA Basketball Logo Stickers during the 1981-1982 season. The stickers were once again a repeat of the 1979-80 and 1980-81 designs with the team records on the tops of the stickers. 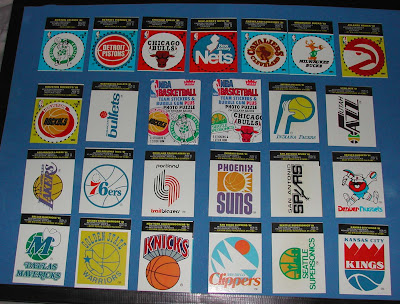 Thanks to Fleer expert Barry for this scan of the complete set of all 23 teams. The 8 teams shown on the top of the picture with blue/red/yellow borders could once again be found with all 3 border color variations.

The stickers had puzzle backs which formed a puzzle of the World Champion 1980 - 1981 Boston Celtics: 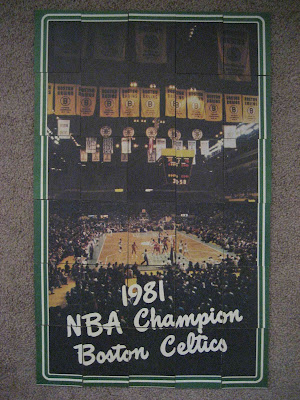 Thanks once again to Fleer Sticker Project contributor Craig for this picture of the complete puzzle.

Fleer did not repeat the cartoon backs from the previous year, so all sticker backs are puzzle backs.

There were 2 different wrappers for this series: 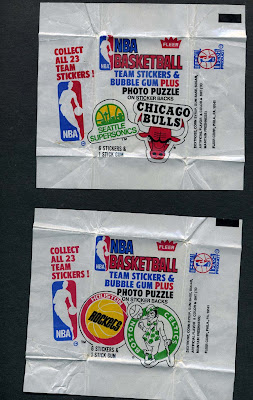 And finally, here's a picture of the box: 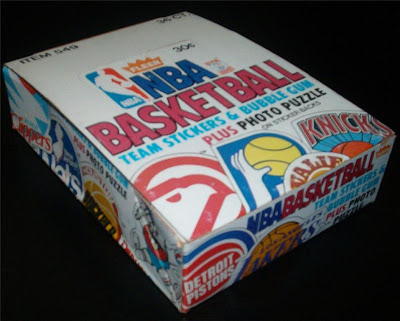 After this set, Fleer took a break from Basketball for a few years, before coming back in 1986 with a set that had an iconic card you may have seen before: 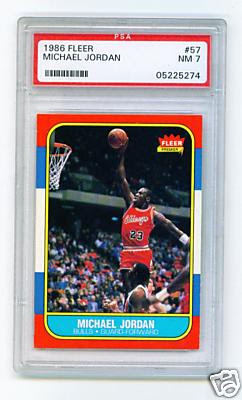 Unfortunately even though Fleer became very involved in the Basketball market starting in the mid 1980's through the early 2000's, they never again issued any team logo stickers.
Posted by Fleerfan at 6:34 PM

can anyone help me with completing this set? I am in need of a PORTLAND TRAILBLAZER sticker with a certain CELTICS puzzle piece on back. I can send a scan when asked. I am looking for 3 others from this set for a friend and welcome all emails to help others complete their sets, as well. I have many singles from all of the years plus some of the cloth ones available for trade. my email address is

I am also looking for some 1975 FLEER cloth football logo stickers:

and have many baseball and football logo stickers to offer in trade, too.

I have collected logo stickers for many years and have been thrilled to contribute to this fabulous web site in the past and will continue to do so in the future when necessary!!

thanks to all,
Mike