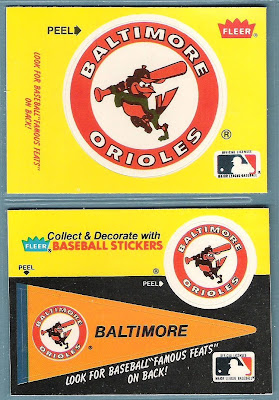 Unlike the 1985 set with uniform stickers, the 1986 set changed the design to include pennant stickers. Each team had 2 stickers - a sticker with the team's logo and another sticker which had a pennant along with a smaller logo sticker.

The stickers were inserts in packs of 1986 Fleer Baseball cards. The box shows an example of the pennant sticker on the front: 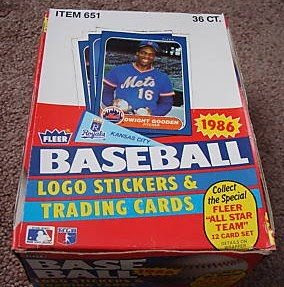 The other thing to notice from the box was that 1986 was the set that brought us the modern insert card. Topps had issued inserts in the late '60s (with sets like posters, game cards, deckle edge cards, decals, and even coins), but after 1971, there were no insert cards in baseball card packs until 1986 Fleer. 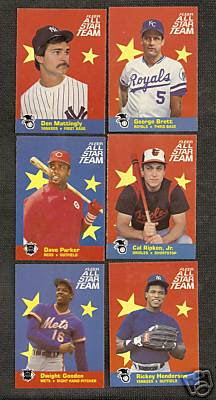 and a Hall of Famer set: 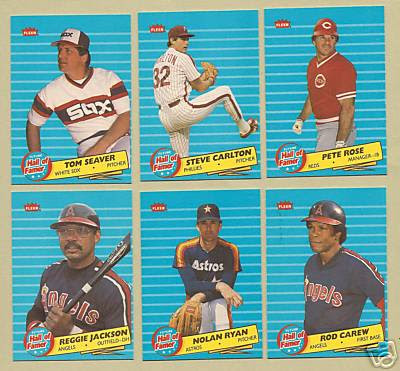 The packs mention collecting the "Limited Edition" sets, with the back indicating that the All Star cards were in regular wax packs 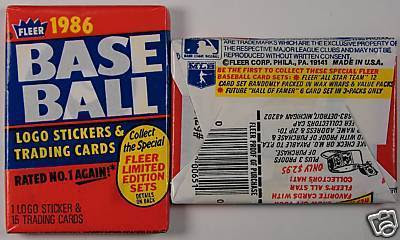 and the Hall of Famer cards were in 3-packs (or "rack packs") only:

Note the front of the rack pack mentions the Hall of Famer insert. 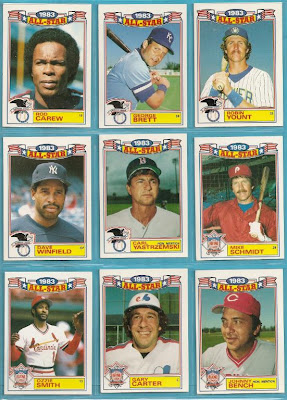 but those were distributed in rack packs which showed the All Star card on top so you knew exactly who you were getting (as opposed to opening a pack hoping to get an insert card):

Therefore, I would say that 1986 Fleer was the first set to feature an insert set that was randomly included in packs. Fleer would take the insert concept much further in the coming years as it issued more and more insert sets each year to the point where the base set almost became secondary to the multitude of insert sets. The other card companies of course followed close behind.

Turning back to the stickers, here is a look at the complete set: 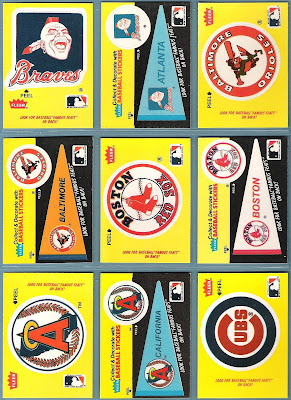 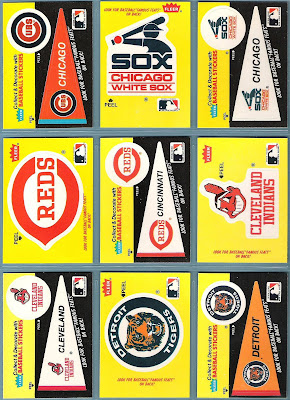 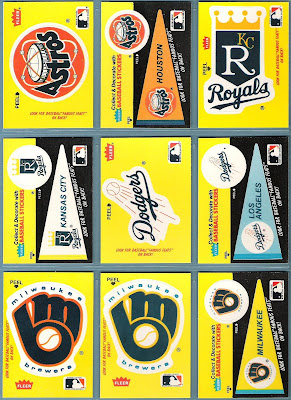 If you are wondering why I've got the Brewer's logo shown twice, take a closer look below: 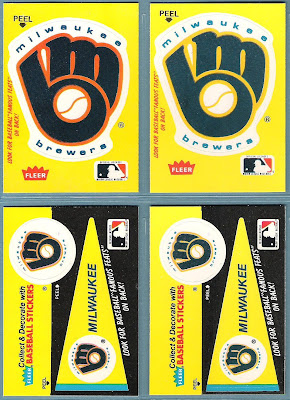 There are color variations where one version has a darker blue and a more orange colored outline around the logo while the other version has a lighter blue with a yellow outline. 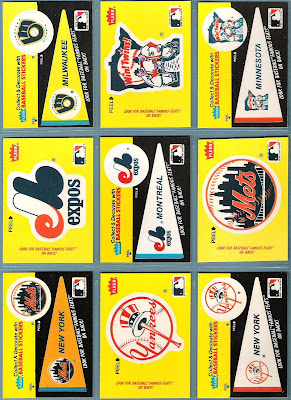 See if you can spot the 2 variations in this group: 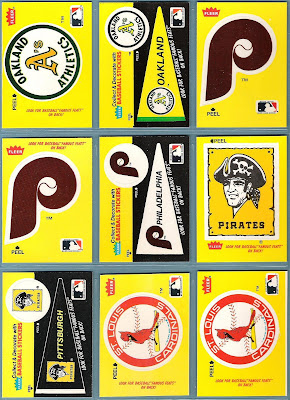 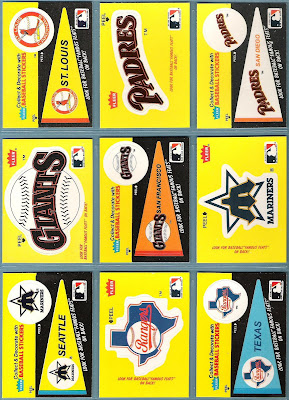 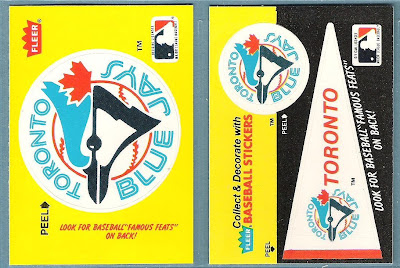 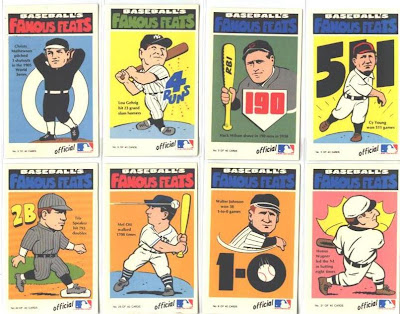 but in this case the set was not in color like the original, and only included 22 cards instead of the original 40 cards. Here is a look at the complete set of sticker backs: 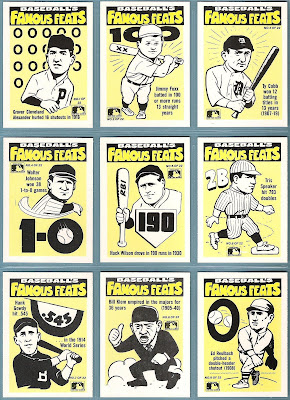 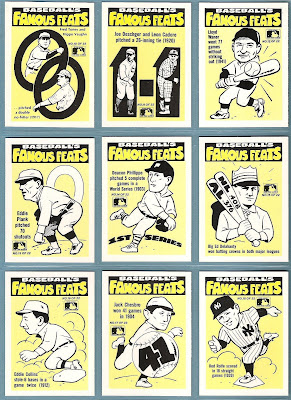 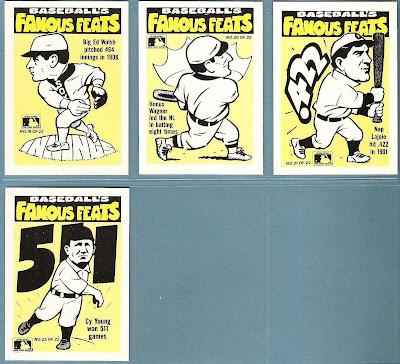 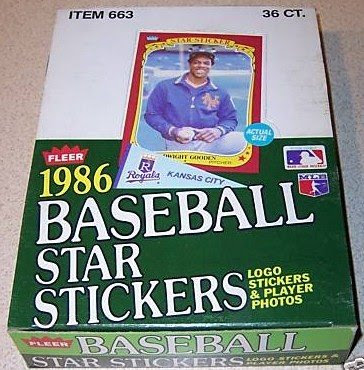 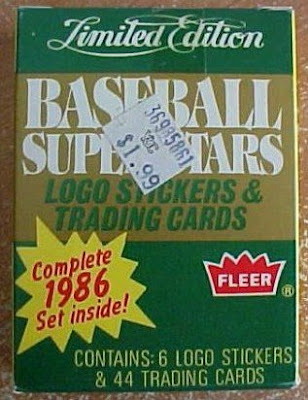 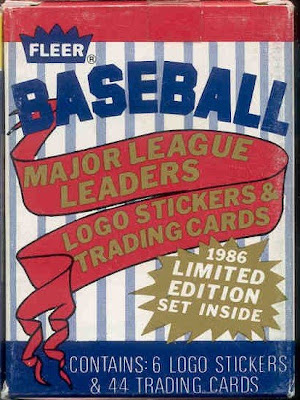 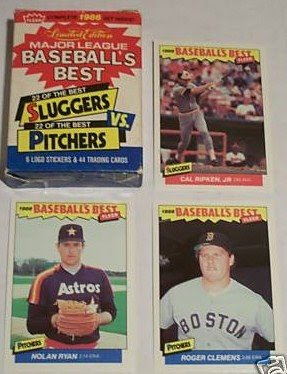 and of course the Update set as well: 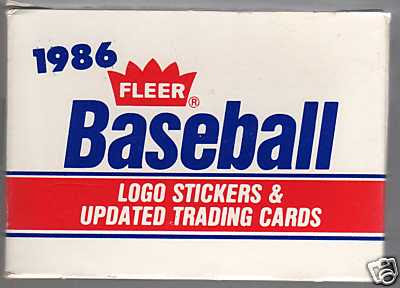 It just astounds me about color managment in Fleer stickers. I honestly think who was ever in charge of those things, had to be color blind to some degree. Royal blues look like navy, navy looks like black & is black in some cases, maroon looks brown; forest green looks black. And some of those accent colors look too light & washed out as well. I collected Fleer in 1990 & 1991. The 1990 set was as dreadful as this one, but the 1991 set was much, much better. The colors were much cleaner and brighter. I can't comment on 1992 because I stopped collecting at this point. I used to have these little round stickers all over my binder, and eventually I would end up drawing the newer expansion teams & older logos.

I don't think you mention it, but there are 2 versions of the Cardinals' pennant sticker - one with a yellow beak and one with a red. Did I just miss that?