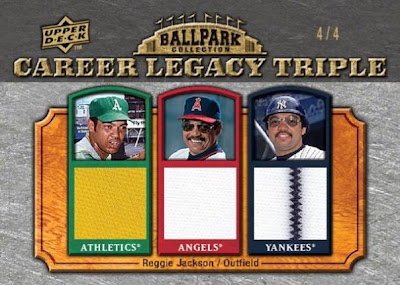 Unless I'm mistaken, the picture of Reggie on the A's is simply a tightly cropped shot of this photo that I reviewed back in March after finding it on the Corbis website: 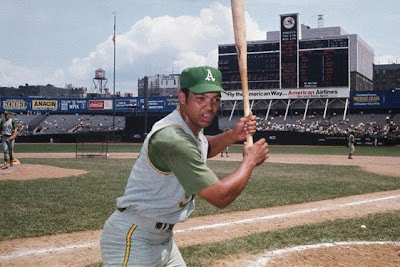 I think its great that a picture that I had never seen before and spotlighted on the blog since I really liked it has turned up on a baseball card. This picture may have been used before on card, but if it has, I don't recall ever seeing it.

However, the reason I wanted to write today's post was based on something Mario said in his review noting the fact that there was no Orioles jersery to go along with the other teams Reggie played for: "Memo to Upper Deck, Reggie Jackson played with the Baltimore Orioles in 1976 and even led the league in slugging."

This comment got me to thinking about the fact that there really are very few pictures of Reggie as an Oriole. Certainly that is due to the fact that he only played for the Orioles for one season, but it is made even worse by the fact that 1) he wasn't traded to the Orioles until right before the beginning of the season on April 2 (and therefore never attended Spring Training with the team when lots of pictures are typically taken), and 2) even after he was traded, he held out for a month before joining the team due to a salary dispute, missing the first month of the season.

Given he never spent a day of Spring Training with the team and missed the first month of the season, its not surprising that you don't see that many photos of Reggie as an Oriole. I've been trying to track down pictures of Reggie from that 1976 season, and here's what I've been able to find:

Probably the most familiar shot of Reggie on the Orioles is his Sports Illustrated cover: 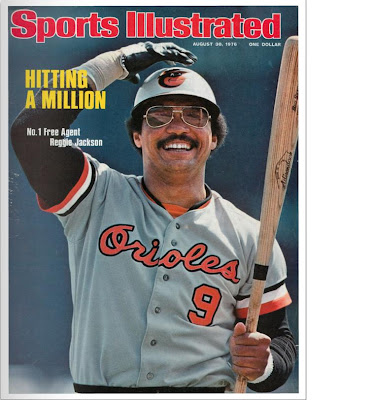 Here is the lesser seen picture that accompanied the SI story: 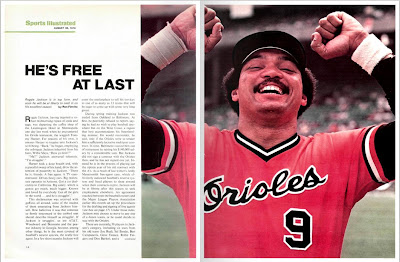 The other well know picture is from the 1988 Score card: 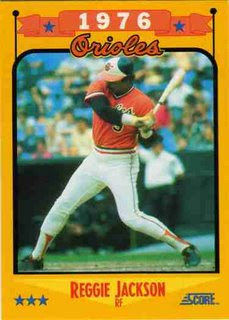 One of the more famous pictures of Reggie in an Orioles uniform is the card that was never produced - the Topps proof card showing Reggie on the Yankees but still using a picture of him on the Orioles before the Topps airbrush artists doctored up another picture to make Reggie look like a Yankee:

The Renata Galasso Reggie Jackson set also features this photo as well as one other shot on the O's: 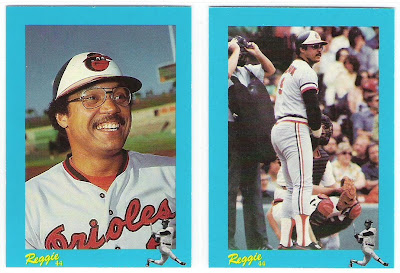 Reggie did actually show up in the 1977 Topps set in an Orioles uniform - on the Orioles team checklist (middle row, far right): 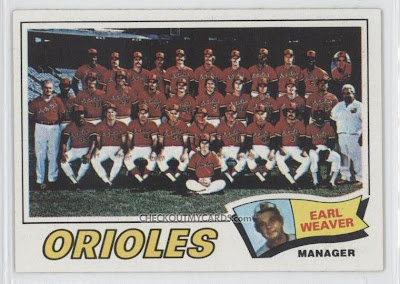 The Star Company also featured Reggie on the Orioles on this 3 card panel from their 1985 Reggie Jackson set:

This picture seems to be taken from the same game as the Star card on the right based on the person dressed in white in the dugout: 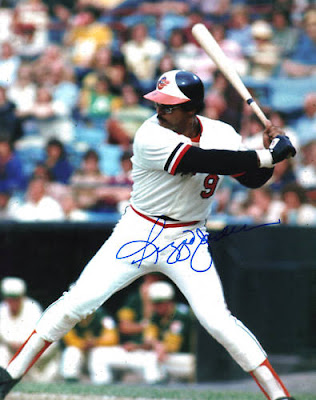 and these 2 shots appear to be from the same time (but just a different angle) as the picture on the middle card in the panel of Reggie signing autographs at Yankee Stadium: 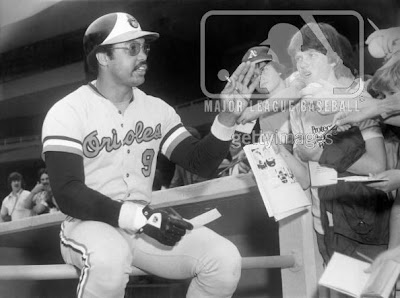 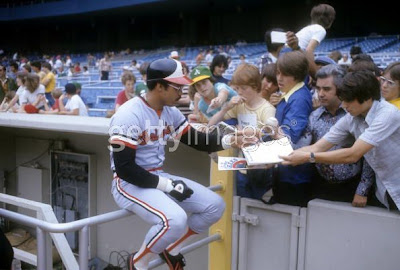 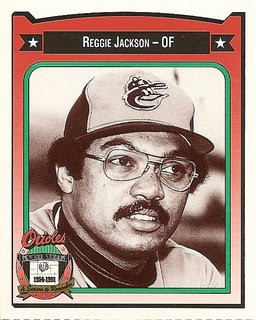 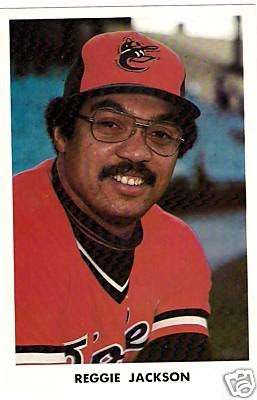 This picture also seems to be from the same photo session: 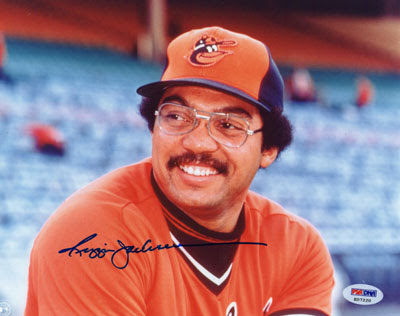 Here are a few more pictures of Reggie in an Orioles uniform, including Reggie's first home run as an Oriole: 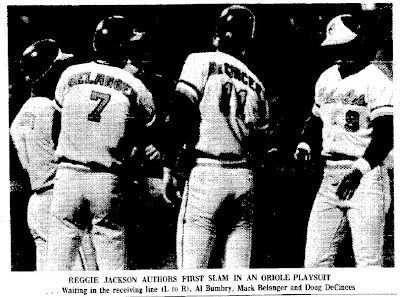 An unused shot from Sports Illustrated that appears to be taken the same time as the picture that made the cover: 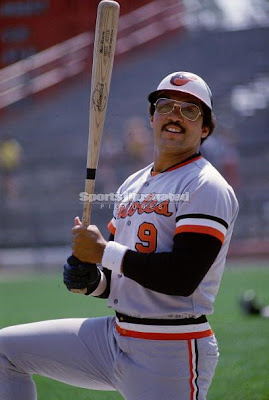 Reggie scoring at the plate while Carlton Fisk waits for the throw: 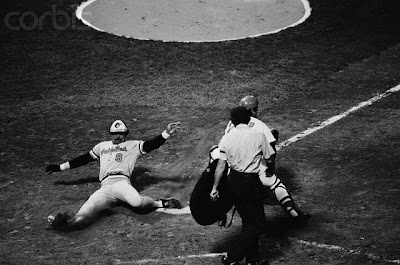 and a few other shots: 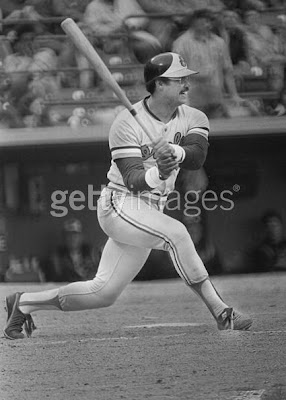 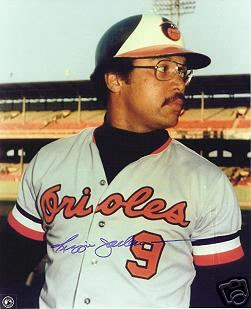 Here is a picture from Tiger Stadium of Reggie standing behind Mark Belanger and Lee May as they are warming up: 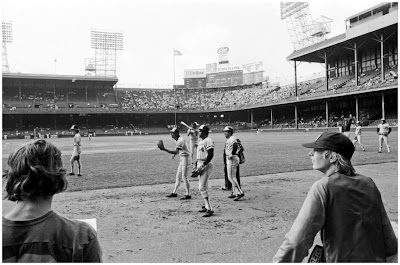 and another picture of Reggie at bat at Tiger Stadium: 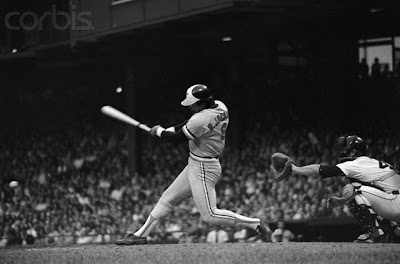 And finally, perhaps my favorite shot - the classic Reggie Jackson corkscrew swing where he completely ends up turned around (which just happens to be against the Yankees): 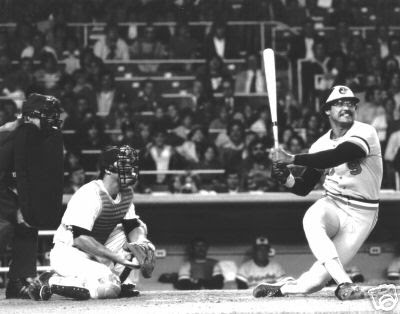 Reggie only played 134 games for the Orioles due to his holdout, yet still managed to finish 2nd in HRs in the AL with 27. The Orioles finished 2nd that year, 10.5 games behind the Yankees.

Even if Reggie hadn't held out the team likely wouldn't have made up that much ground to catch the Yankees, but when I think back to that season (which is the first season I really started following the Orioles), I wonder how that season might have played out differently had Reggie showed up in Baltimore on day 1 ready to prove Charlie Finley wrong for trading him rather than sitting out a month trying to negotiate a better deal with the Orioles.

Even beyond the 1976 season, I wonder how things might have turned out had the Orioles been able to work out a long term agreement with Reggie. Reggie did not have a contract for the 1976 season which is why he was a free agent at the end of the season.

Apparently Reggie wanted a 3 year deal for $675,000 which the Orioles were not willing to pay as they did not have the revenue stream to support this level of salary (in hindsight this would have been a steal as Reggie ended up signing a 5 year deal with the Yankees at the end of the season for $3 Million).

While they were trying to work out a contract, the Orioles agreed to pay Reggie around $200,000 for the season as he played without a contract. Unfortunately, this caused quite a problem in the Oriole clubhouse as there were a number of players who had not signed contracts for the 1976 season that had been forced to take paycuts. There was a lot of resentment from the other players who were not playing with a contract that season that Reggie was getting a better deal even though he'd never played a game for the team before.

Remember, these were the final days of the Reserve Clause, which meant that essentially a player belonged to a team forever, whether or not there was a signed contract. This would all change at the end of the 1976 season with the first free agent draft. That is why the team was able to force paycuts on players who would not sign a contract - the players had no other option at that time. But this is also exactly why the players who did not have a contract in 1976 didn't want to sign one - they wanted to be in that first free agent class at the end of the season.

With Reggie holding out and the turmoil that was caused by him not joining the team at first, and then the additional problems caused by the Orioles rewarding Jackson with more money than he was making with the A's to get him to show up while at the same time penalizing the other players who would not sign contracts, the 1976 season ended up being a difficult one for the Orioles.

As a kid, I'd wondered why the 1976 Topps Traded set didn't feature a card of Reggie as an Oriole since the traded set seemed to cover the other preseason trades: 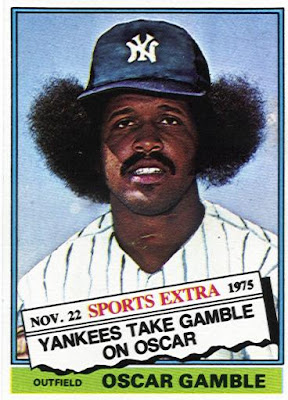 In retrospect, given the A's didn't trade Reggie until right before the season started, I guess Topps already had the traded set ready to print before the season started, and didn't have time to add Reggie, or Ken Holtzman, Don Baylor, Mike Torrez, and Paul Mitchell who were also involved in the trade. Looking back, its probably for the best, as at least we don't have a Reggie card with a terrible Orioles cap airbrush job like this: 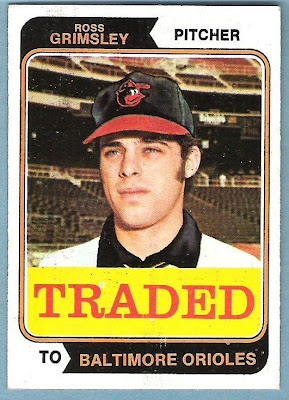 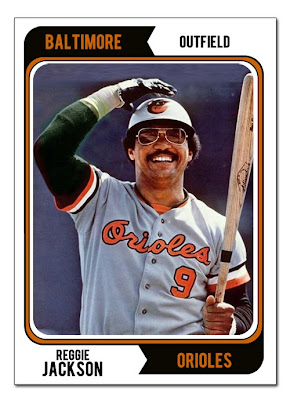 Even though Reggie wasn't an Oriole in 1974, the classic 1974 design which features the Orioles team colors makes for a great looking card. Excellent job! This is something I would love to see from Topps as a Vintage Legends card.

Speaking of Topps, there is a new Reggie Jackson card to add to the list as Reggie appears in an Orioles uniform on an insert card in the 2011 Topps set: 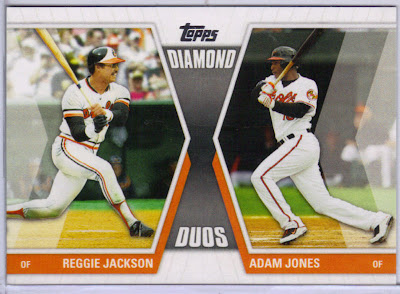 At first glance I thought this was a new shot of Reggie, but it appears to be this picture with some changes made to the crowd in the background: 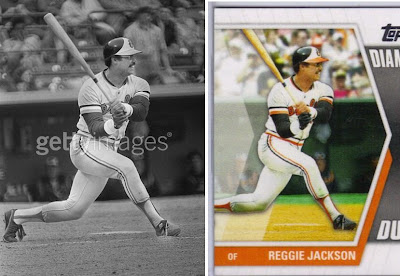 Great rundown of Reggie as an O! Reggie's quick departure to the Yankees was the beginning of my brother's hatred of the Yankees (he's an O's fan).

My hatred was to follow a year later. Some World Series game or something or other. Reggie did something big, I think. I can't remember. Repressed memories ...

I wish Topps would have come out with a Reggie Oriole card during their Archive series. I saw Reggie as an Oriole during a Sox game at Old Comiskey Park that summer of '76.

Can you tell who the catcher is on the left-hand card in the 1985 Star Company panel? Or at least can anyone tell which team the Orioles are playing?

The catcher maybe Carlton Fisk. The team the Orioles are playing is the Red Sox, I can tell by the background pic with fans where the caps the Red Sox wore in 76, red crown with a black bill.

Another pic of Reggie in an Orioles uniform is this HOF sheet.

You did such a great job on this.

I was going to research this topic and post my Reggie stuff in his Orioles "costume" but when I found your post I realized nothing could top what you did.

Just firing off a note to let you know that I gave you a shoutout and a half (I linked to your Renata Galasso piece as well) for writing this over on my site, Scott Crawford On Cards.

The piece I referenced this one in is here.

Your piece has terrific info on Oriole Reggie, and led me to my own copy of the Galasso set (for starters), so thank you!

Scott - glad you enjoyed the Reggie article and that you were able to find the Renata Galasso set to get a couple of cards of Reggie as an Oriole. Thanks for linking to my site in your post. I've added a link to your blog on my blog list to return the favor!

I'm hoping he shows up in the "The Lost Cards" inserts in Series 2 or Update. Heck of a missed opportunity if not.

I have the Reggie #10card from the ,77 sset is it a keeper order to the side card