The previous post about the new Wacky Packages Old School stickers and the parody of Fleer's Crazy Magazine Covers provides a perfect segue to review this Fleer set that I've been meaning to cover: 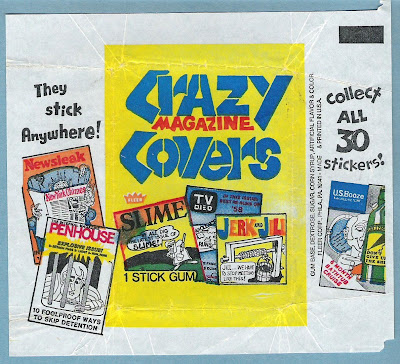 In 1973 as the Wacky Packages craze was taking off and Topps was producing series after series of stickers, Fleer responded with their own set of parody stickers. However, instead of making fun of products, they decided to parody magazine covers instead.

Fleer's 1st series of Crazy Magazine Covers consisted of 30 stickers (similar in number to each series of Wacky Packages) and a 9 piece puzzle with checklists on the back (exactly like Wacky Packages): 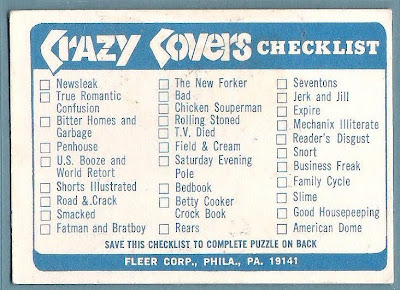 Here is a look at the 1st Series stickers (click on the picture to see a larger image): 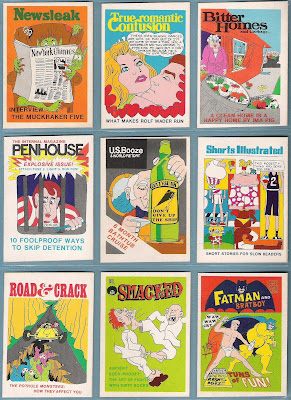 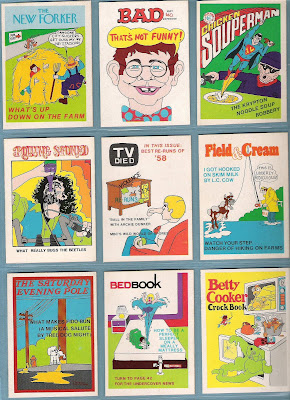 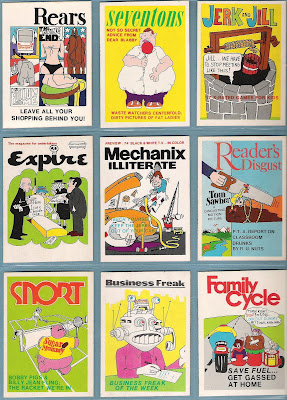 As you can see, the artwork is very poorly done on these stickers. It looks like Fleer was in a hurry to create a Wacky knock-off as quickly as possible, and it shows.

That is why I find this Old School Wacky so funny - because it is so true! 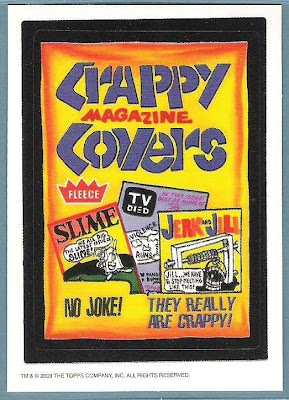 Even though the quality of the artwork is not very good, at the time I had fun collecting them, and did find some of the gags to be funny.

Here is the completed Series 1 puzzle: 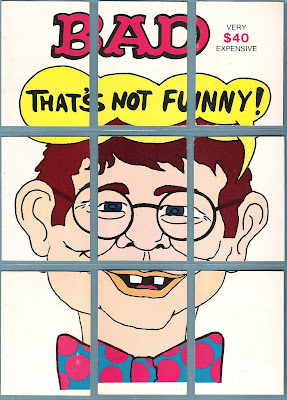 Series 1 sticker backs are tan with instructions on how to peel the stickers, and can be found with 1, 2, or 3 blue stripes on the back:

Fleer must have sold enough of Series 1 to warrant a second set as Fleer released a 2nd Series with 30 new titles.

It is believed that the second series wrapper looks exactly like the 1st Series wrapper shown above, but with text that says "New Series". I have never seen that wrapper, nor has Rob who has put together an excellent review of Fleer's Crazy Covers (as well as many other parody sets) on his website Non-Wackys.com

Here are the 30 stickers that make up Series 2: 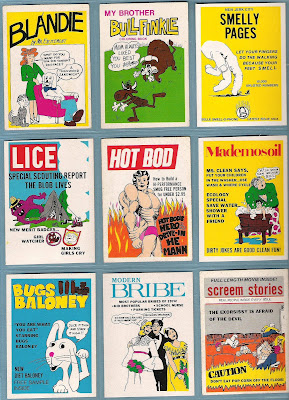 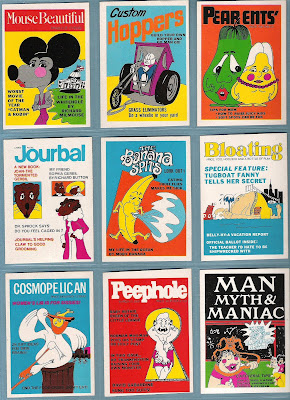 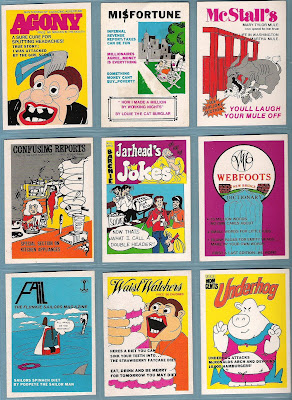 The Series 2 sticker backs are once again tan, this time with 1, 2, or 3 orange stripes:

The puzzle mentions this is the 2nd series: 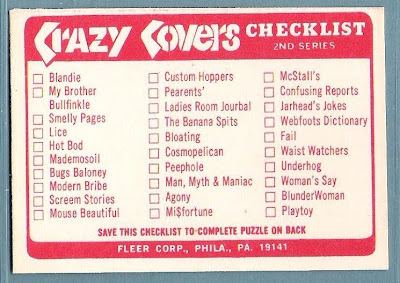 Here is the completed puzzle (from Non-Wackys.com): 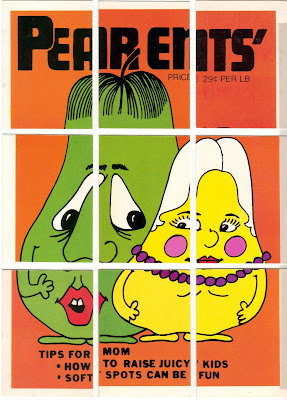 Fleer issued a 3rd Series, which in fact was just a reissue of the same stickers in Series 2 along with 10 new titles for a total set of 40 stickers. Because the backs for the 30 Series 2 titles are the same in both sets, it is impossible to tell whether a Series 2 title actually came from a Series 2 or Series 3 pack.

Only the 10 new titles have different backs. Some have puzzle pieces on the back:

while others have a checklist on the back: 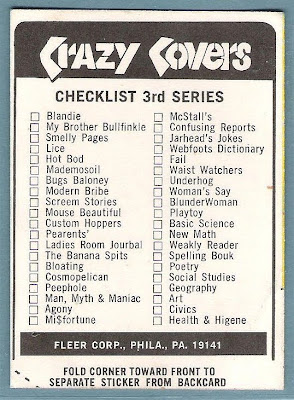 Notice the first 30 titles are the same as Series 2. Only the last 10 titles are new for Series 3.

Since the checklist and puzzle pieces are on the backs of the stickers, separate puzzle/checklist cards were not included in Series 3 packs.

Here are the 10 new titles (which actually seem to be school text books instead of magazines): 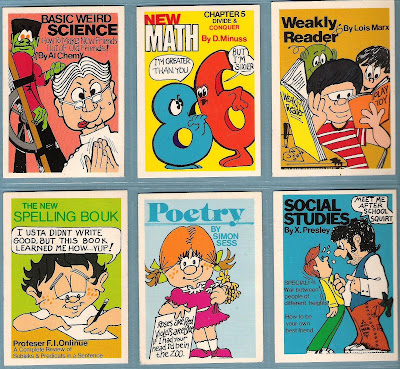 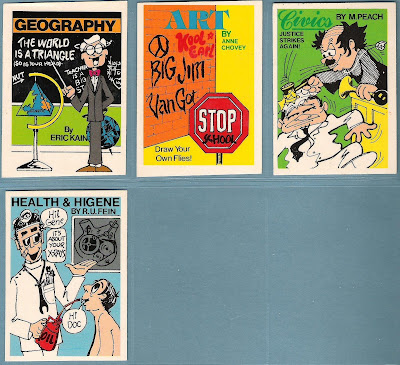 The wrapper was modified on the back to indicate that there were now 40 stickers in the Series, but the wrapper still features Series 1 covers. The only difference on the front is the text "All New Series". 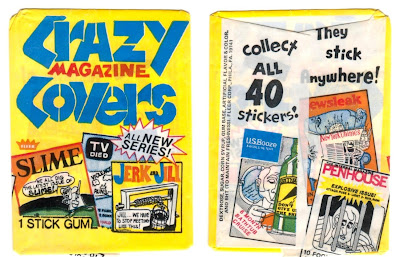 (Series 3 wrapper courtesy of Non-Wacky.com)
Since Fleer kept using the same wrapper it probably didn't help sales as kids who may have bought Series 1 and/or 2 probably didn't see the difference on the back of the wrapper about 40 stickers and figured they already had these stickers.

Even the Series 3 box (note the mention of 40 stickers) shows the Series 1 titles.

The box top does indicate "All New Series", but if you just saw an open box like this, you might figure you had already completed this set: 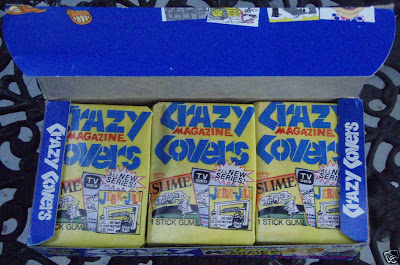 The box doesn't mention this is Series 3 although the checklist does.

Wacky Packages used the essentially the same wrapper design for each Series as well, but at least changed the color so that kids could easily tell that a new Series was out. 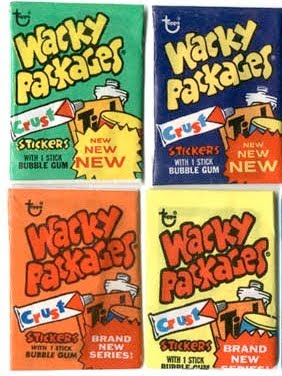 Topps would also put a sticker on the front of the box to make sure kids knew that there was a hot new series to collect. 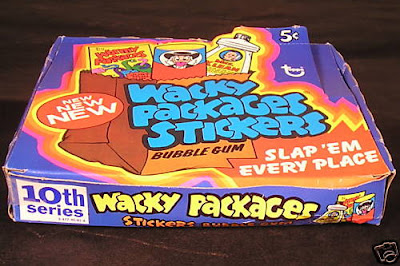 From the artwork to the packaging, everything about the Fleer Crazy Covers seems rushed and quickly thrown together. I enjoyed collecting the stickers at the time, but in taking a look back now, it seems that Fleer could have perhaps had more success with it had they put a bit more effort and thought into it.
Posted by Fleerfan at 7:48 PM

I love these things. I've got a full 1st series set (with full puzzle) of the Crazy Covers. I grew up with Wacky Packages. I thought I was the only one at the time. In 3rd? Grade one of my classmates had bought a full box (I forget which series) and had 2 or 3 full sets. I bought one from him. Then unfortunately within that day I either sold or gave away most of them because I was such a sucker or nice guy. I should have said No to the offers.

If you're interested in seeing one, there's an unopened pack of Crazy Covers with "All New Series" on the wrapper on sale on eBay now. I assume it's second series but I don't really know. (I'm not selling it -- I'd buy it but I think I have one already in storage, and I'm a little short of funds anyway, though it's a fair price): http://cgi.ebay.com/DONRUSS-CRAZY-COVERS-UNOPENED-PACK-/200609661407?pt=LH_DefaultDomain_0&hash=item2eb54481df#ht_2548wt_1187

Anyway, I think your site is great, quite informative, and I thought based on your comment that you'd never seen one that you'd at least want to look.

Thanks for taking the time to make the nicely illustrated post.

You should make a Wikipedia entry.

The Wacky Packages are there-- but no Crazy Labels or Crazy Covers.

If you're interested, maybe you could do a Kickstarter to make a book on Crazy Labels.

I bought the recent Wacky book. It was quite nice.

Great post, thanks for making this. As an update on series 2, based on the full or close to full boxes of Crazy Covers series 2 boxes listed on eBay over the last few years, pack wrappers look to be exactly the same as series 1. The box is also the same, but with a different item number printed on the back ("ITEM 793"), an orange sticker that reads "2ND SERIES, ITEM 793" on the top, and "8025 A" printed on the bottom. "All New Series" is not printed on the wrappers or on the box. Series 3 was the only one with the "All New Series" designation. Thanks again!

I know the series 2 puzzle pieces are rare.....how about a series 3 puzzle.i never see and wondered the market on them.thank you