The 1985 set was in some ways a significant departure from the designs of the previous 2 years, but in other ways, it was very similar to the 1983 and 1984 Baseball Sticker sets. 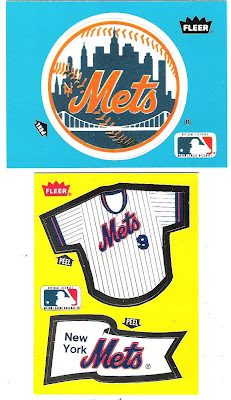 The differences are obvious: team jersey /uniform stickers have replaced the cap stickers: 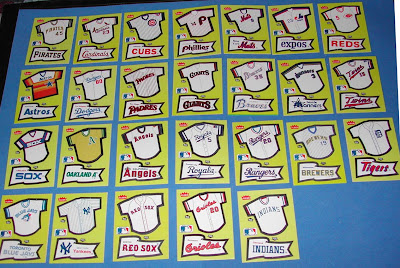 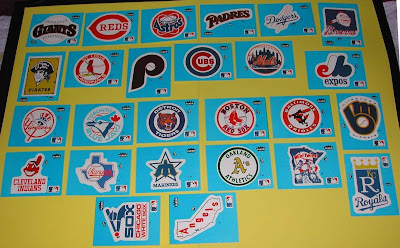 However, if you take a closer look at the stickers, you will see that all of the "PEEL" variations that we found in the 1983 & 1984 sets are once again present in the 1985 set. In addition, some other minor variations which I didn't cover in my previous reviews show up again in 1985.

There are some very subtle differences found on the Cardinals and Giants stickers which I didn't bother mentioning in the 1983 & 1984 reviews because I had already covered the fact that both teams had rainbow border variations. Those same subtle differences are found in the 1985 set as well. 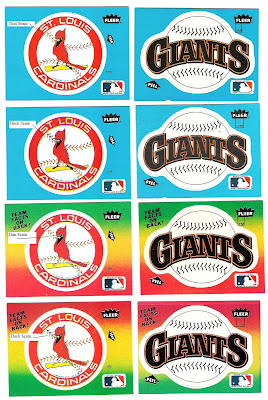 It would appear that Fleer used the same 11 x 12 sheet of 132 stickers, and changed the cap stickers to jersey stickers and changed the border colors, but left the logo stickers including the PEEL arrows and TMs exactly as they were for 1983 - 1984. This would be the most reasonable explanation of why all the logo varations can be found once again in 1985.

There are also 2 uniform sticker variations. Both the Red Sox and Astros jersey stickers can be found with and without the city names on the pennants under the jerseys: 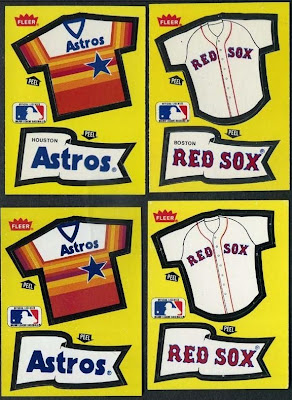 Since its been over 20 years since I've opened any 1985 Fleer product, I can't say for sure whether or not a particular back was found in a certain release.

Here is the complete 1985 Fleer Baseball Sticker set with all the variations (except for the Red Sox jersey and Yankees PEEL variations I'm still trying to track down): 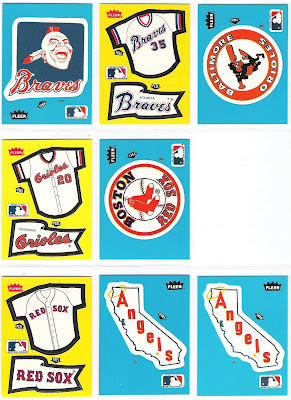 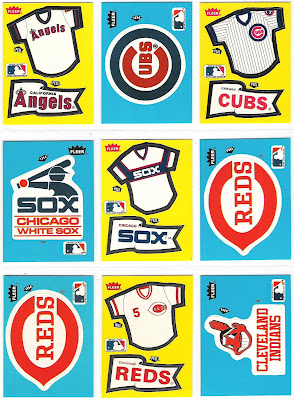 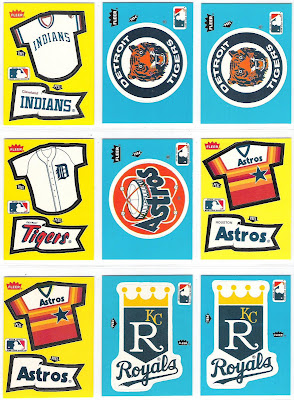 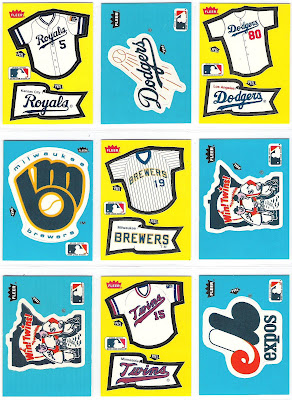 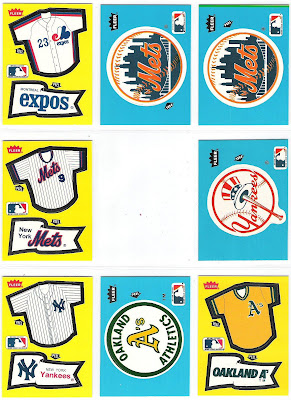 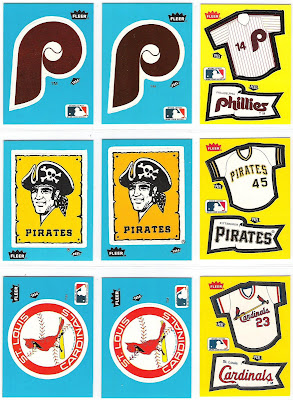 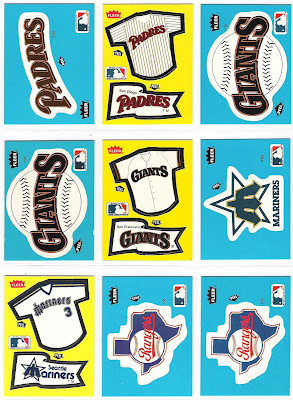 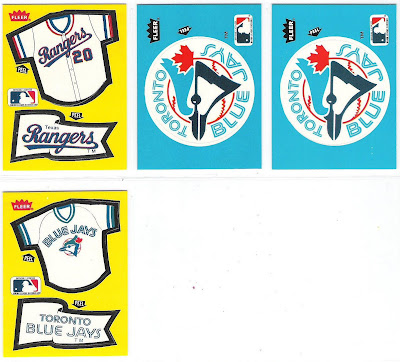 The stickers were once again inserts in 1985 Fleer Baseball Card set, as well as were included with the 1985 update set: 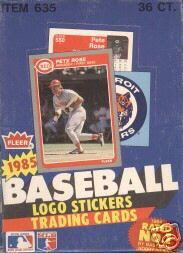 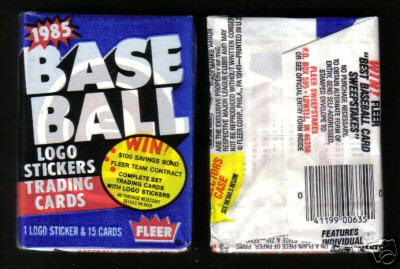 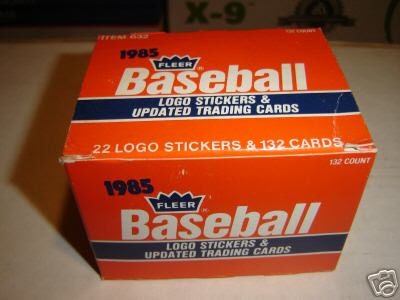 Does anyone notice that in the 1985Fleer stickers that the Mets uniform that is depicted is the one that was worn from 1978-1982? It seems that Fleer chose to use this uniform style rather than the newer "racing" stripe uniforms that had the huge Orange/Blue/Orange stripe that went down the sleeves and continued down the sides. What is even stranger is, while they allowed that to happen to the Mets, they actually used the newly updated Padres uniform in the 1985 set. By the way, I still think it was a mistake for San Diego to ditch the color brown. ;)

You are a very great man for posting these. This site makes me happy.

this is amazing. i was just thinking about the uni/logo stickers i collected growing up this past week and now i found this page. great stuff. i have a question, though--i imagine the ones i had were from after 85 (i was born in 82 and i remember them somewhat well)...do you know what year they stopped them? also, i remember there being a book that i had--which had a place for each of the stickers for each team. i recall noticing the tigers had the white 'D' on their home caps and orange 'D' on the road--my first uni observation beyond the obvious. been a geek about it ever since. any answers would be greatly appreciated, thanks and great site!

Great Site!!! I have a ton of the mid 80's stuff, since this was the height of my collecting. It makes we want to dig them up and see what I have.

Was it Fleer that issed the Stadium cards too?? I remember writing to Sports Collectors Digest and getting my name in there because I found one of the stadium pictures was upside down!

To answer the question about how long Fleer produced the stickers, Fleer continued to insert team logo stickers in their products through 1991. Thanks for your great comments about the site.

Marty - Yes, Fleer did issue stadium pictures on the backs of their stickers in 1988.

Do you happen to remember which stadium was pictured upside down? I'd be interested in trying to hunt that variation down.

Thanks for your kind comments about the site.

thanks for the info about them making the stickers through 91. the ones i had were definitely older than 85. i distinctly remember the powder blue backgrounds to the cards. and i remember in the book that i had, it had spaces for home uniforms, road uniforms, and caps. if you ever come across images of the book, i would be blown away. once again, great site!

THE "UPSIDE DOWN STADIUM" WAS DODGER STADIUM.
bobs_1mil_cards on ebay
bobscardz@aol.com
BOB

I have a box of 1985 Fleer Limited Editions Logo Stickers and trading Cards - Super Stars.

It came witth 6 stickers and 44 trading cards. Is there something different about this set, since I notice you didn't post that kind of box... looks more like a deck of red white and blue playing cards.

David - I think this the set you are referring to:

that's the one... thanks! Didn't realize it was considered a separate set. the stickers in the set have the blank backs you mentioned as being more rare.

I just found this 1985 set with red sox, braves, dodgers, rangers, expos, and rangers jerseys has sweepstakes on the bak . What are they worth who wants to buy them mint condition vagazillegurl@gmail.com

Looking back at my 1985 Fleer Stickers. Does anybody know if the 3-card perforated panels are reviewed on the Fleer Sticker Project or anywhere else. I would to get a checklist. Any help would be appreciated. ~BOB~