Something caught my eye on the NFL All Pro Patches (AKA Team Action) wrapper I posted as part of my review of the 1977 Fleer Team Action Stickers and Cards: 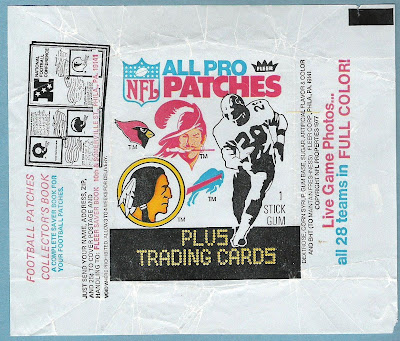 Take a look at the ad for the Football Patches Collector's Book:

Is it just me, or does this look exactly like the pages from the Sunbeam Helmet Sticker Saver Book that I posted as part of my look at the 1975 Sunbeam Cloth Patches: 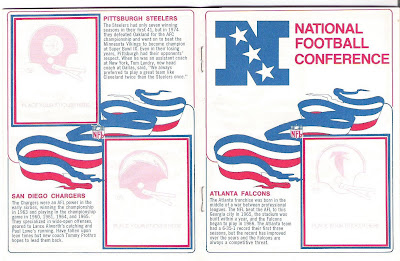 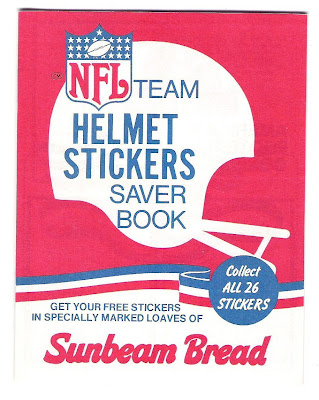 This is a very interesting coincidence. I have always wondered if Fleer had any involvement in producing the cloth patches for Sunbeam since they appear to be very similar except for the size. Seeing the exact same artwork used for the 1975 Sunbeam Saver Book 2 years later for the "complete saver book" advertised on the 1977 Fleer wrapper leads me to believe there must be some connection.

The other interesting thing to note is if in fact the album pictured in the ad is the actual album collectors received if they took advantage of the offer, it appears there was no place for the expansion Seattle Seahawks or Tampa Bay Buccaneers given that the teams are in alphabetical order, and since the end of the AFC section goes from Pittsburgh to San Deigo, it looks like neither expansion team is included as either Seattle or Tampa (remember they switched conferences in 1977) would have had to been right after San Diego, yet the next page starts with the NFC Atlanta Falcons. This almost makes it appear that they were offering customers the 1975 Sunbeam Saver Book since this was published the year before the 2 teams joined the league.

Perhaps the Fleer album was different than what was pictured, and they just used that artwork to give an idea of what their album was going to look like, but either way it was quite a surprise to see the very same pages I chose to show from the Sunbeam Saver Book showing up a few weeks later on the side of a Fleer NFL All Pro Patches wrapper.

If anyone reading this has any Fleer mail in premiums or remembers sending off for them, I'd really like to hear from you as there were a number of mail in items over the years that never seem to turn up for sale, so consequently I don't have any information on them to share.
Posted by Fleerfan at 9:10 PM

I found an unopened pack of this and was wondering if you knew a guess on what a pack is worth and what patches are worth money if it might be better to open it or leave unopened value or resale wise. thanks.

any idea on value of an unopened pack and the patches themselves thanks!