After reading the great post by Jim on the Sports Design Blog about Evel Knievel, I had to dig out my old Topps Evel Knievel cards and reminisce about the good old days of being a kid growing up in the 1970s.

Jim's post does a great job of describing what it was like being a kid back then with all the Evel Knievel toys that we had to play with as well as discusses the media coverage of Evel's exploits that showed that Evel had a strong sense of marketing and self promotion.

The one thing that Jim didn't mention is one of the first things I remember when I think back to how big Evel was at the time - the 1974 Topps Evel Knievel card set. 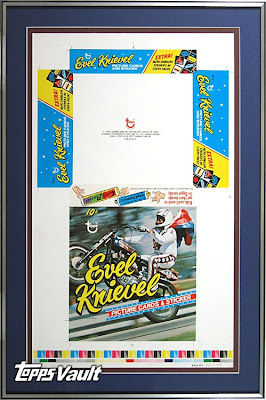 The card set was a "test" issue as it did not have extensive nationwide distribution. I was fortunate enough to be in an area where the cards were available, so I fondly remember buying packs and trying to complete the set. Unfortunately I wasn't able to complete it, and still need a number of cards to finish the 60 card set.

Interestingly, the cards only came in cello wrappers. Wax wrappers were never used. 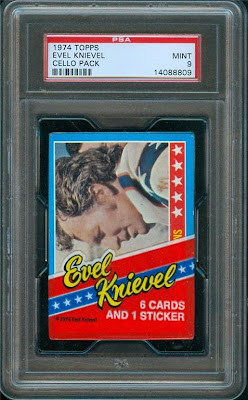 Here is a look at the uncut sheet that was recently up for auction by The Topps Vault: 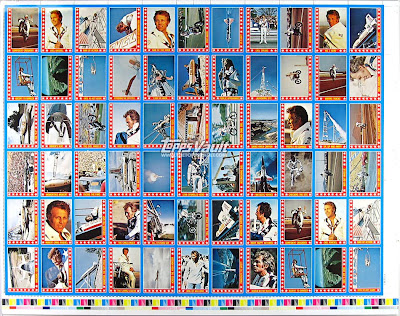 In addition to the 60 card set, there was also a set of 22 stickers, which each had 16 small square stickers depicting logos and names of various automobile companies and auto related products. 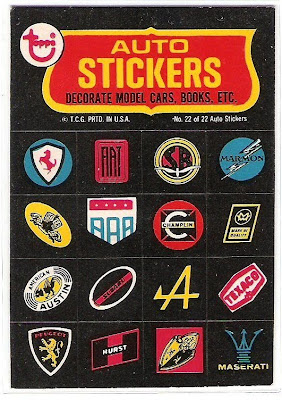 The sticker design was actually recycled from an earlier Topps release from 1970 that was included with the Way Out Wheels set, which is why they are called Auto Stickers and why there is no mention of Evel Knievel on the stickers.

Here is the 1970 Way Out Wheels wrapper mentioning the Auto Stickers: 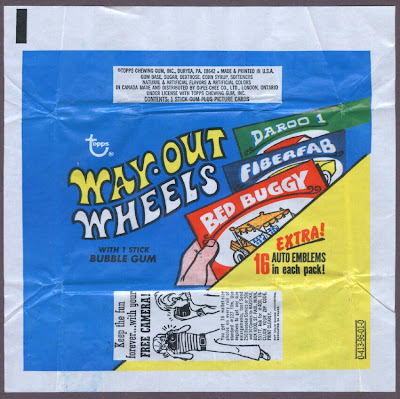 The stickers also are in the same format as the 1971-72 Topps Basketball stickers: 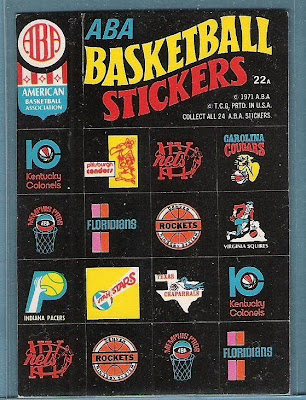 Here is a look at an uncut sheet of the Auto Stickers: 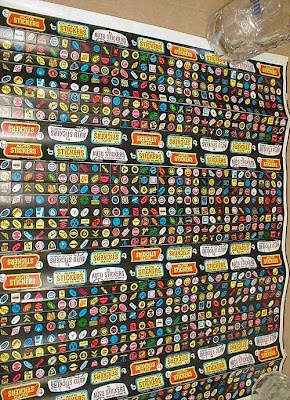 It appears that packs sometimes had the sticker on the front instead of the card: 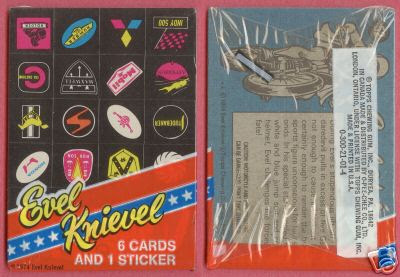 This is how I recall the packs as I remember checking out the packs to see which stickers I wanted. 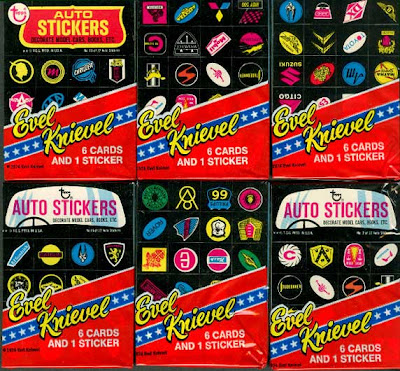 Given this was a test issue, the cards aren't that easy to find. They're not impossible to locate, but you don't see them for sale all that often.
Posted by Fleerfan at 10:57 AM

Wow I have a handful of Evil Knievel cards and I think two of the stickers. When I was a kid (as with many other sets) I had a few more of them, but some slipped trough the cracks of time.

Fun fact: It's the only Topps set where the back of each card says CAUTION: MOTORCYCLE AND BIKE STUNTING CAN BE DANGEROUS. DON'T TAKE CHANCES!

I think these were the first non-sport cards (other than Wackys) that I collected. I remember sticking the stickers all over my top drawer in the built-in desk in my room. Mom & Dad weren't too pleased.

I saw an Evel bendy figure at an antique market a few months ago - though he did not have the helmet or the all important pimp cane.

Is there any indication as to what geographic areas Topps would use for test marketing? (This set or any other, I'm curious how that worked - whether it was by state or "East Coast" or whatever.)

Hi, Could someone please tell me how to differentiate between the 1970 Way Out Wheels stickers and the 1974 Evel Knievel stickers? Since the same design was used for the front of both sticker sets, are the backs different colors?
Thank you! Mike

1970 Topps Way Out Wheels had the white backs, and 1974 Topps Evel Knievel had the tan backs. The Way Out Wheels set had no stars by the Topps loge, and the Evel stickers had 1 or 2 stars next to the logos. I heard there is 2 variations of #22 in the Way out Wheels set. A tough set, cards and stickers. The Evel cards were considered a Test Set by Topps. Evel was the only hero we had back in the day, peace, Dirty D