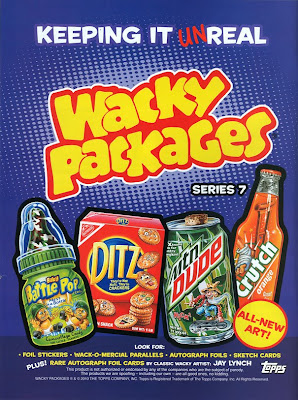 as well as a one sheet containing additional information about the set and the various inserts:

Check out the bottom of the ad - Topps has come up with a great use for the "cereal" boxes that they have used in the past for sports cards - these boxes depict classic Wacky cereal parodies!

In addition, some other titles are pictured on the cover of the Aug/Sept cover of the Non-Sport Update Price Guide: 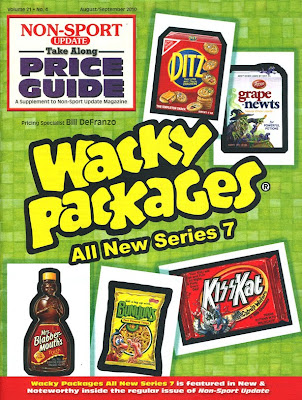 When word first came out about this set in May, the projected release date was August 23. I'm not sure if that is still the release date or not, but Topps.com is indicated that they will be released this month so they should be showing up shortly.

Based on the titles shown so far, this looks like it will be a great series!
Posted by Fleerfan at 9:16 PM

I like the "Mountain Dude" with the cork in the can, though it isn't really doing anything the brand does itself with the hillbilly on retro packaging.

Will this set have ultra rare, signed, hologram, platinum plus chase card insanity?

It looks like this will be the best "Wacky" series in years!!!