Following up the review of the Post Cereal issues from the early 1980s, I wanted to take a look at another cereal related release, this time from Kellogg's that came in packages of Frosted Flakes in 1992 that featured Major League Baseball team logos:

There were four different sticker sheets, with one sheet for each of the four divisions at the time. Each sheet also features a sticker of Tony the Tiger.

Even though it was released in 1992, the set includes the expansion teams that would start playing in 1993 as the Marlins can be seen on the NL East sticker sheet:

Here are the other two divisions which are still in the original packaging: 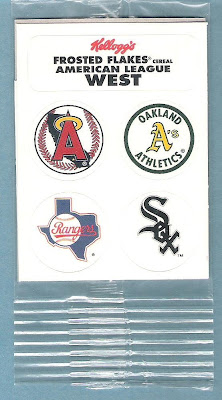 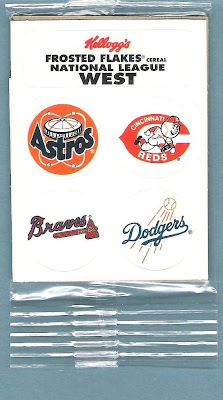 Of course, the lawyers have to make sure the parents are sufficiently warned so that Kellogg's can't be sued if there are any sticker mishaps, so the backs contain this message: 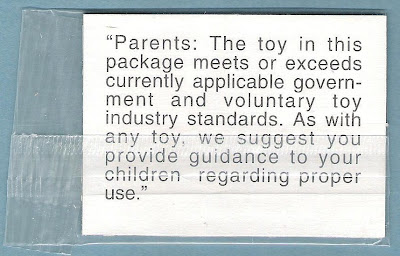 Here is a look at the box, which in this case not only has a sheet of stickers inside and Tony wearing a Red Sox uniform: 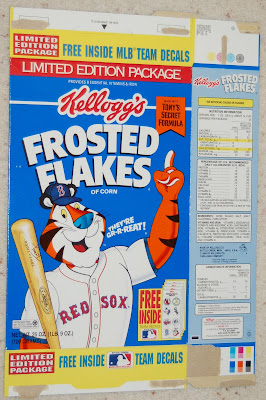 but also features a history of the Boston Red Sox on the back: 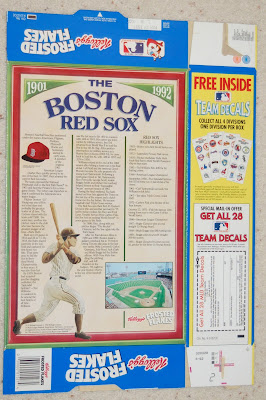 I'm not sure if there were other boxes which featured other team histories on the back, as the Red Sox box is the only team I've come across so far.

There was also a version of the box which did not include a team history, but which featured a picture of all 4 sticker sheets on the back, and Tony in a Kellogg's uniform: 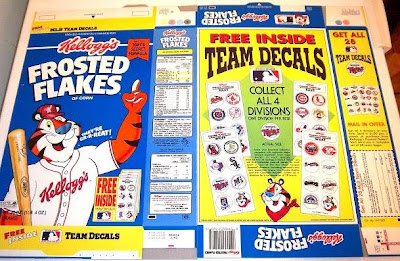 If anyone has a box with Tony in another team uniform, please let me know as I'd like to see if there were any other teams that were featured on the box as part of this promotion.
Posted by Fleerfan at 7:34 PM

I have a Tony in a Cubs uniform. I have no clue what teams I have on the stickers as it is unopened.