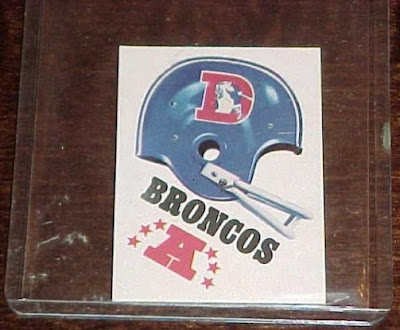 As you can see from this picture of the sticker in a top loader, the stickers are small. The backs are game pieces for the Kellogg's "Touchdown Game" and contain a 1983 copyright: 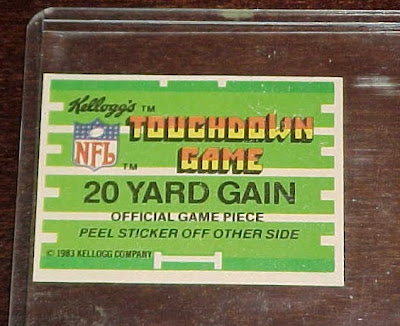 I'm afraid I have no information about the game or how it was to be played.

There was also apparently a poster for displaying the sticker collection, which was called a Team Standings Sticker Chart (recognize some of the artwork that was used in the previous year's NFL Posters?): 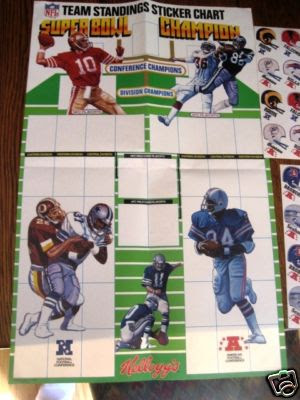 I hope the stickers could be reapplied as you would be out of luck if you started applying stickers during the season and would have to change the standings as the season went on.

The picture of the poster and the following pictures of helmet stickers come from an ebay auction from a year or so ago. Since these are sheets of stickers, its possible that perhaps the stickers could be ordered as a set: 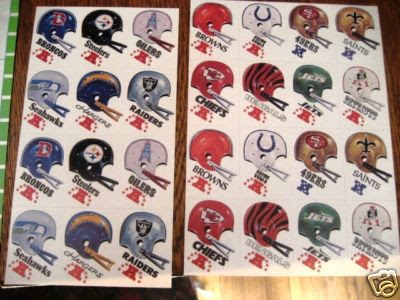 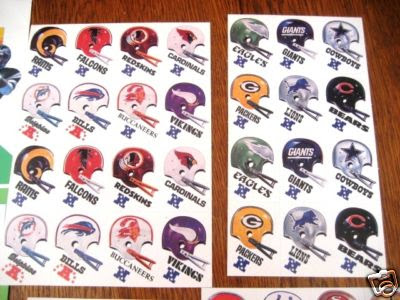 I'm trying to figure out if this was available as a mail in offer why each team would have duplicate stickers. Perhaps that was to allow the collector to place the stickers on the standings poster for each division, and still have a full set of teams to then fill in the playoff and Super Bowl spaces on the poster as well.

This seems to be a rather obscure set as I rarely see individual stickers come up for auction, and have only once seen the collector poster and sheet of stickers.

Unlike the 1982 Kellogg's Football Cards / Panels which are very easy to find: 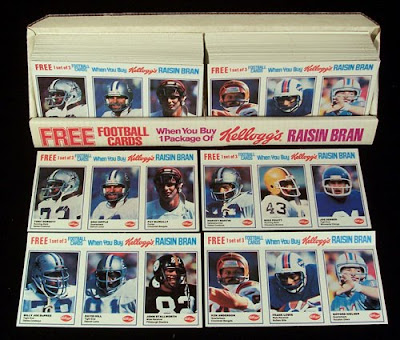 the 1982 Kellogg's NFL Team Posters and 1983 Kellogg's Helmet Stickers which were released around the same time frame are much less common.
Posted by Fleerfan at 7:55 PM

I have the full set of Kelloggs stickers with the poster from 1983. And the original envelope they came in. I just got them yesterday in a box lot of kid's *vintage* magazines.

Any idea what they are worth? I was going to list them on eBay, but after reading your post, I may chicken out. ;) --K

I don't know what the set went for that I had found the pictures from since I saved the pictures but didn't end up tracking the auction to see what the final price was, so I really couldn't give you an idea of what they might be worth. I haven't been able to find the set listed in any Football Price Guides.

I'm also not sure how many collectors are looking for these since I don't think its a well known item.

If you are interested in selling it at some point, I'd appreciate if you'd let me know by replying to this post.

Thanks! I will be selling this set... eventually. I'm "watching" a couple of eBay & off-eBay offerings for the PARTIAL items from this set, just to see how things go.

I know "scarce/rare" doesn't necessarily mean the same as "valuable" especially when it comes to an odd item like this, so I'll take my time and keep my eyes peeled.

Thanks so much for your reply. I've bookmarked your blog. Nice work!
--Kate

Feel free to copy pics/description for your blog.

One of the Dallas Cowboys cards has a mistake.The card is of Billy Joe Dupree,but the photo is Harvey Martin.

Oh wow... I had that standings poster as a kid... forgot all about it. Loved the illustrations. .. and I do paintings like that now... yeah, stuck a couple times but you really had to be careful... If I remember right, I applied the decals to paper, rolled a piece of tape on the back, applied a piece of tape to the poster in each spot.... much easier to peel tape from tape to move the teams than peeling decal from poster :)