Kellogg's had one other NFL promotion in 1983 besides the team stickers we previously reviewed - a mail in offer for an NFL team ring: 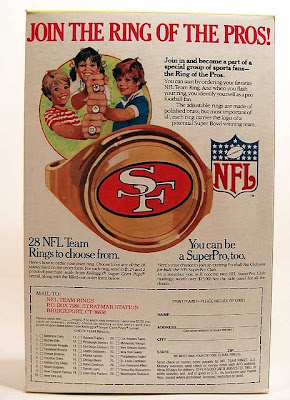 The NFL ring offer was available on boxes of Kellogg's Sugar Corn Pops: 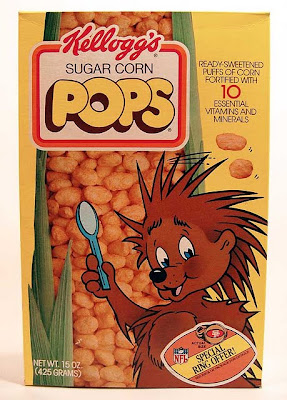 According to the order form, the rings were available for $1.25 plus two proof of purchase seals from boxes of Sugar Pops.

Since the rings were not premiums in the box, but had to be ordered, they are not that easy to come by. I've only seen the Eagles and Steelers rings offered for sale: 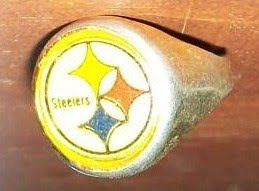 The back of the box also mentions an opportunity to join the NFL SuperPro Fan Club, which apparently was advertised on the side of the box.

From this 1985 poster, it looks like the SuperPro Fan Club had a lot of goodies: 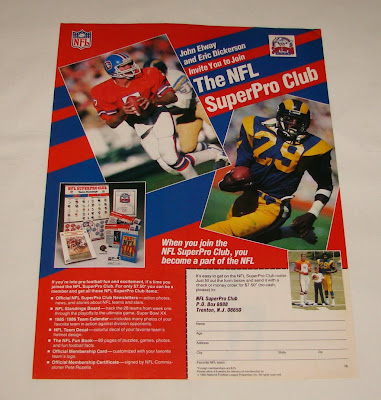 By joining the club, you got NFL newsletters, an NFL Standings Board, a team calendar, a decal of your favorite team, a copy of the NFL Fun Book, an official membership card, and an Official Membership Certificate "signed by NFL Commissioner Pete Rozelle"!

From this brochure from 1982, it also looked like there were sweepstakes to win tickets to the Super Bowl: 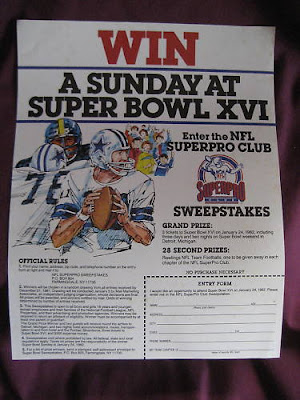 I'm afraid I don't remember seeing anything about the SuperPro Club when I was a kid. If I had, I surely would have wanted to become a member.
Posted by Fleerfan at 8:02 PM

I remmember this, 1985 Super Pro Club. I think the advertisement was in a pro football yearbook. I remember my favorite team at the time was the 1984 St Louis Cardinals, so I joined using that team. The 1985 calendar featured photo's of the entire NFC East (Cardinals, Cowboys, Giants, Eagles and Redskins). I really wish I would've save that thing, it was great because all of those team in the NFC East won thier division over a period of 4 years in the 1980's (not the Cardinals).