The timing of today’s review couldn’t have worked out any better given the MLB All Star Game being played tonight in Yankee Stadium. We’ve reached 1981 with the review of the annual Fleer sticker releases, and the 1981 set just happens to have a set of cards highlighting the All Star Games from 1933 through 1980 on the backs of the stickers.


To give you an idea of what the All Star cards look like, here is the card from the last time the game was played in Yankee Stadium which was 1977: 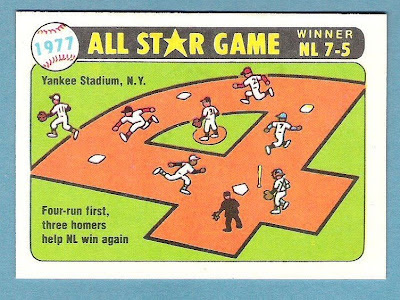 As a side note, I am now officially OLD. If you have been watching baseball long enough to have seen the All Star Game played in the same stadium twice, I think that makes you an “old timer”.
I remember watching this game back in 1977 and being really excited because my favorite pitcher Jim Palmer was starting the game. He proceeded to get lit up for 3 home runs (Joe Morgan leading off the game and Greg “The Bull” Luzinski with a 2 run homer later in the first inning, and Steve Garvey with a solo shot in the third inning), and left the game down 5-0.

Taking a look at the starting lineup from that 1977 All Star Game, HALF of these guys are now in the Hall of Fame, including 6 out of the 9 starters for the (and they still lost!):
Starting lineups
There were also 8 reserves who made the Hall: Steve Carlton, Goose Gossage, Tom Seaver, Bruce Sutter, Mike Schmidt, Dave Winfield, Dennis Eckersly, and Nolan Ryan. That makes 17 Hall of Famers at the 1977 All Star Game, plus all time hit king Pete Rose. Not a bad year in terms of talent.
Getting back to the stickers, the designs are the same as the 1980 set with 4 different stickers for each team, with the only real change being the fact that the stickers with the team’s won - loss records have been updated to reflect the results of the 1980 season. 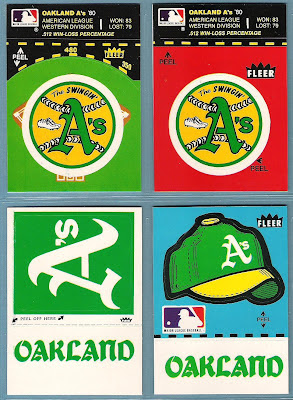 For some reason Fleer did not honor the Phillies with a World Series designation as they had done the previous year for the Pirates. However, the same Orioles & Pirates border color variations exist from the previous year.
Only 2 teams underwent any significant changes from the 1980 set to the 1981 set. The Braves went from the lower case "a" to the upper case "A" 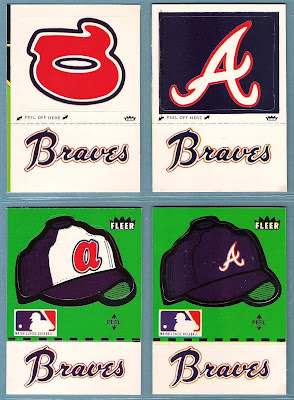 and the Padres went from a dark brown "SD" to a lighter brown "SD" with an orange outline: 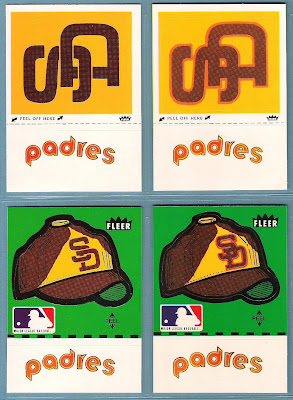 The one other difference on many logo stickers was the addition of the registered trademark symbol (R) as seen on the Yankees logo sticker on the right: 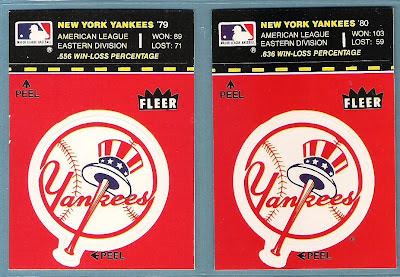 The (R) symbol was added to most of the teams in 1981, but not all of them. If you look at the A's logo stickers above, you'll see that they did not add the symbol.

1981 was the last year that the stickers were issued on their own. As I mentioned in my previous post about the 1981 Fleer Baseball Card set, even though Fleer won the right to produce baseball cards, a later ruling gave Topps the sole right to be able to issue baseball cards with gum, so Fleer decided to use the logo stickers as an insert in place of the gum.
In honor of tonight’s All Star Game, here is the complete set of the 1981 Fleer All Star Game cards: 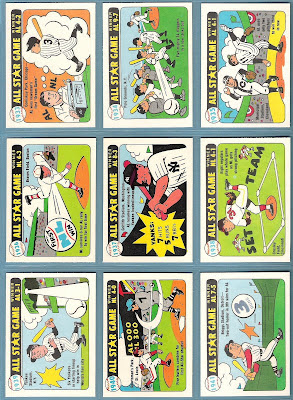 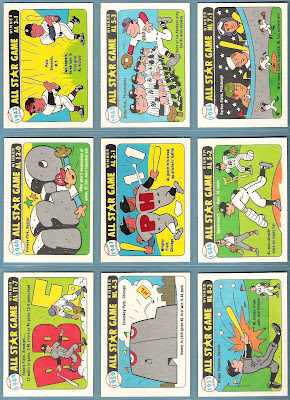 Note there is no card for 1945 as no All Star Game was played that year due to World War II. 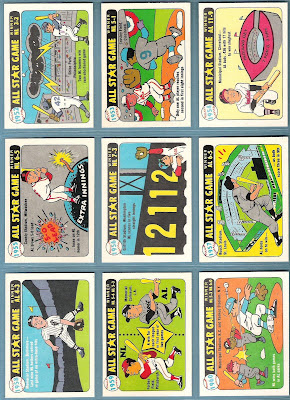 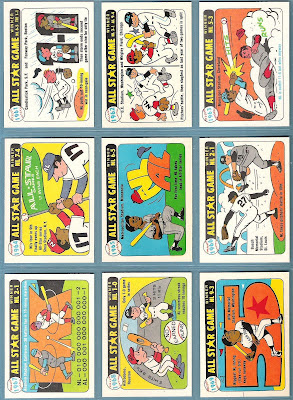 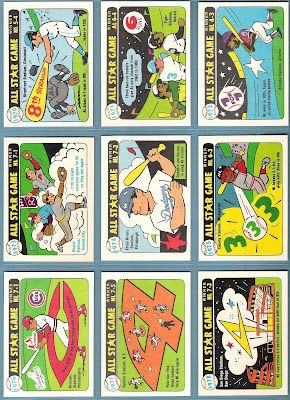 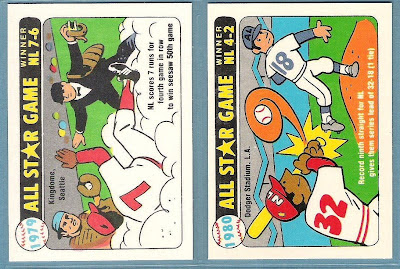 Finally, here is a look at the wrapper: 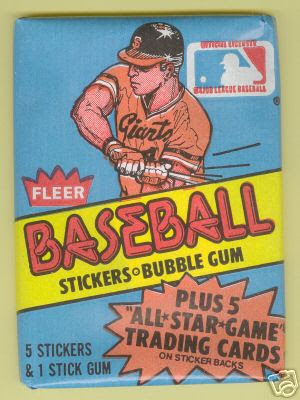 This set marked the end of an era for Fleer as they would no longer issue Baseball Logo Stickers as their own product after having done so since 1967 starting with the Cloth Emblems (1967 – 1968), which were followed by Cloth Patches (1969 – 1976), which then became the Hi-Gloss Grand Slam stickers (1977 – 1979), and finally just Baseball Stickers (1980 – 1981). Starting the following year, the Logo Stickers would become Fleer’s standard insert in its baseball card packs for the next 10 years.

Thanks to this picture from Joe, it appears these stickers were also offered in rak packs containing 4 packs:

I'm taking it that the person on the wrapper is that of Jack Clark.

Keep up the good work!

Good catch on the 2 games in Pittsburgh. I'd forgotten that they had to games within 12 years of each other.

I found a variation with the 81 and 82 Pirates "Green Background" stickers. Because the "79 World Series" was no longer valid, they changed it, it essence having 2 identical "Green Background" stickers with the season stats (keeping the same number of Pirates stickers printed). But upon closer inspection, there is a difference. The amount of homeplate exposed is greater in one. Thus 2 different Pirate Stickers.

Watching the game tonight, I was reminded of these. Thank you so much for posting the pictures, it was a great trip back to age 9.