1982 marked the first year that Fleer inserted the team logo stickers as inserts with their baseball card set rather than issuing the stickers as a separate release. 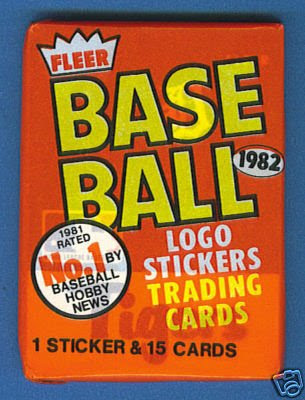 Since a court ruled that Topps retained the exclusive right to package its cards with gum, Fleer needed to come up with something else to include in its packs, so Fleer decided to start inserting the team logo stickers in packs instead of gum in 1982. Thus ended the 15 year run from 1967 through 1981 of issuing Baseball Logo Stickers as their own product.

1982 was the third consecutive year that Fleer issued 4 stickers for each team, and the designs are identical to the 1980 & 1981 sets. 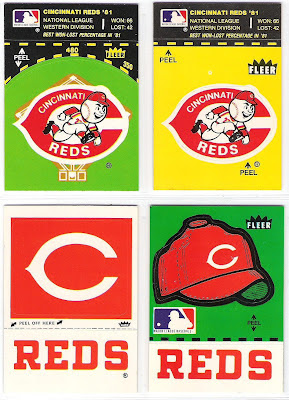 The stickers were updated with the 1981 season won – loss records, but otherwise the stickers followed the same designs they had in the previous 2 years. For some reason, there was no MLB logo sticker as in past years, but the border color variations for the Orioles cap (red & blue), the Pirates cap (red & yellow), and the Pirates logo (orange & blue) that were in the 1980 and 1981 sets are also found in the 1982 set.

There was one other change however, that makes the 1982 set an even greater challenge to collect if you want to build a true master set: 2 of the sticker designs can be found with or without the notation “Puzzle on Back”. Both the cap sticker and the sticker with the logo against the colored background had the “Puzzle on Back” notation added at some point. 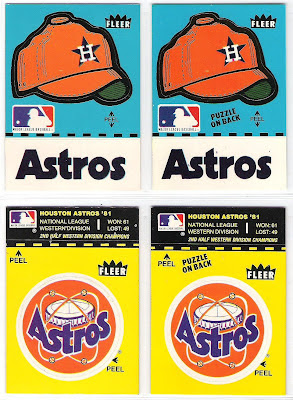 ALMOST all of the teams have this “Puzzle on Back” variation, but 5 logo stickers with the colored backgrounds do not have this variation: the Braves, Twins, Pirates (both blue and orange borders), and the Padres. The "Puzzle on Back" variation can be found on all 26 team's Cap stickers. The stickers with the logo against the baseball diamond and the cap monogram / team name stickers do not have the "Puzzle" variation.

The backs of the stickers form a puzzle of the 1981 All Star Game in . 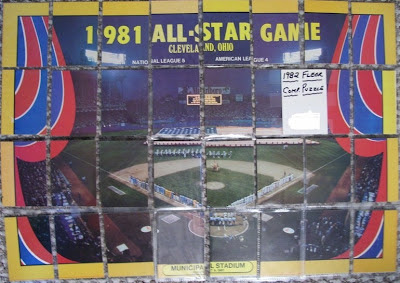 This All Star Game is probably best remembered for the fact that it was the first game played after the 1981 players strike. 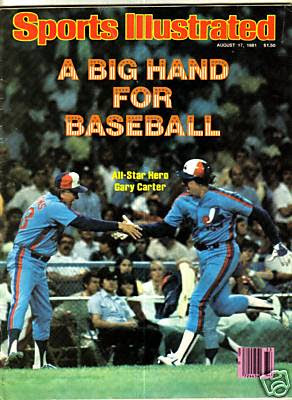 The game was originally scheduled for July 14, but due to the strike, the game was moved to August 9, with the season to start back up the following day. A record crowd of 72,086 attended the game (a record which still stands today).

As for the 1982 Fleer Baseball Card Set, it is widely regarded as one of the worst baseball card sets ever produced due to the terrible photography as the images on most of the cards are blurry and out of focus: 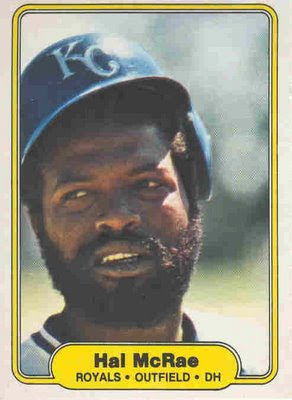 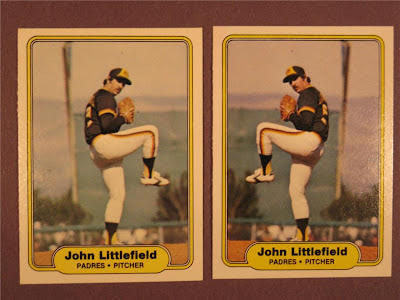 Ben Henry’s review of the 1982 Fleer Set from The Baseball Card Blog sums up the quality of the set very well as he imagines what must have been going on in the Fleer offices at the time:

Unfortunately after a strong debut with the 1981 set, Fleer really dropped the ball with the quality of the 1982 set due to the very poor photographs. About the only thing the 1982 Fleer set has going for it is the Cal Ripken rookie card: 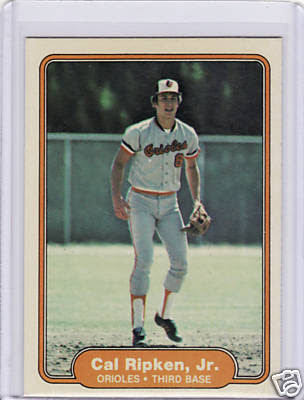 One footnote, even though those Fleer 1982 cards were awful, NBC used those cards in their 1982 World Series open.

Great find on the World Series open with the 1982 Fleer cards. The great thing is that they look just as good on a blurry Youtube video as they do when you hold one in your hand!

Ahh, '82 Fleer. What a terribly awesome set. I still get nervous when looking at my Cal from this series... I always think it's fake. Great post! I had no idea about all of the errors associated with this collection.

One variation with the 1982 stickers appears on some of the green background stickers. The Brewers, Orioles, and Red Sox can all be found with both small and large gaps between the MLB insignia at the left and the team names to the right. I have also heard that the A's green background may have the same variation but I have yet to come across it. Can anyone confirm an A's sticker with a large gap between the MLB insignia and the team name?

The yankees green field sticker has three variations, no. 1 with r registered mark by the s in yankees and no. 2 r registered below baseball sewn seams, and no. 3 in upper left corner Major League rad and Blue logo missing just a white spot. email at bobby1963@bellsouth.net for pics