The Minnesota Vikings have a a variation in the helmet patch between 1972 and 1973 thanks to the Miami Dolphins which share the patch with the Vikings. As we saw when we looked at the Dolphins helmet and logo patches, they made a change in the lettering in their team name, going from an upper case print style in 1972 (top left) to a lower case script style in 1973 (top right): 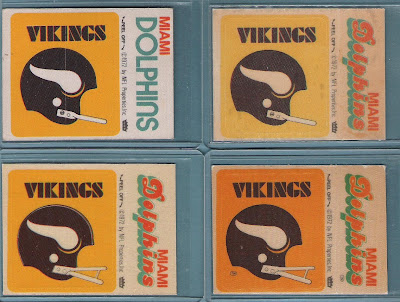 Thanks to Craig sending me the picture, I can show the 1976 cloth patch which dropped the 1972 copyright and added a yellow border around the patch: 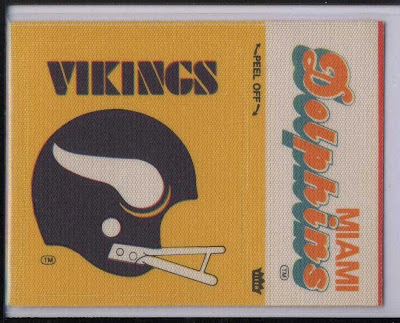 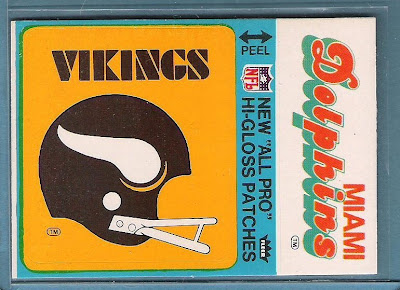 For the Vikings logo patches, they were also paired up with a team that underwent a lettering change in their team name - the Steelers. Just like we saw with the Green Bay Packers whose helmet patches were paired with the Steelers, the 1972 Vikings logo patch (top) has "STEELERS" in all caps while the 1973 patch (middle left) has "Steelers" in a lower case stencil font. 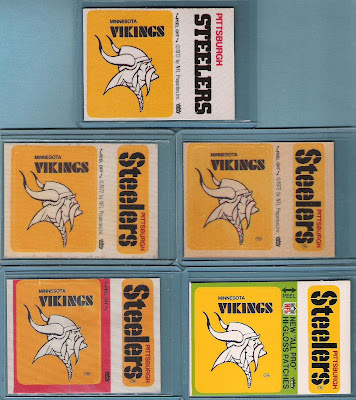 It always drives me a little crazy when the Viking in the logo is shown looking up instead of straight ahead. I'm not sure how or why this ever got started, but the usage of that logo is split close to 50-50 between the rotated version shown on these stickers and the straight ahead looking one.