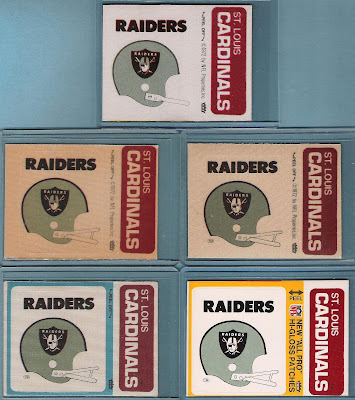 There are 3 logo cloth patch variations and 1 Hi-Gloss logo sticker for the Raiders as the same cloth logo patch was issued for 1972 through 1974 as seen on the left with the 1975 TM version on the right: 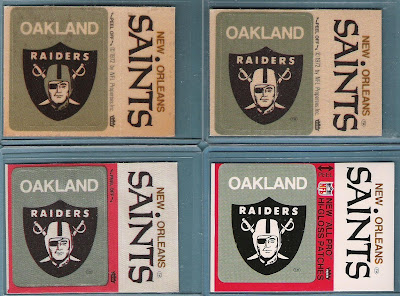 The 1976 cloth patch and Hi-Gloss sticker shown on the bottom row.

NFL History Lesson: How the Raiders came to Oakland:

Raider Nation has the Minnesota Vikings to thank for Oakland ever having a team. When the American Football League (AFL) was being formed in late 1959 - early 1960, Minnesota was one of the cities ready to join the new league. The AFL was being formed by Lamar Hunt and other investors who had made numerous unsuccessful attempts to get an expansion team from the NFL for their city.

At the time, the NFL owners had no interest in expansion as they liked their little group of 12 teams just fine, and saw no reason to expand the league. Things changed very quickly when they realized the AFL was serious about starting a rival league, so one of the things they did was try to keep the league from ever getting off the ground by snatching one of its investor groups and its cities before the AFL was ready for its first season in an attempt to get the league to fold.

Its amazing what a little competition will do to make you rethink your business strategy.

The NFL awarded the Minnesota group an NFL expansion franchise to begin playing in the 1961 season, which left the AFL with only 7 teams before the start of the 1960 season. Quickly moving to get an 8th team in place so that the league would not have to have one team idle each week, they awarded a team to Oakland.

The city had not asked for a team, there was no ownership group in place and there was no stadium in Oakland suitable for pro football . In addition, there was a successful NFL franchise across the Bay in the San Francisco 49ers. However, the AFL owners selected Oakland after Los Angeles Chargers owner Barron Hilton threatened to forfeit his franchise unless a second team were placed on the West Coast so that there could be a West Coast rival in the league.

A "name the team" contest was held by the local newspaper, and the winning name was the Oakland Señors. However, after realizing that this was not a very good sounding name for a football team, the owners changed the team's name to "Raiders", and the rest as they say, is history. 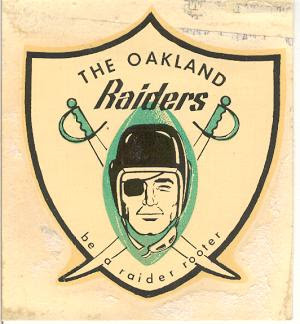 What is the year for the Raiders pics?