The New York Giants have 4 different Fleer cloth patch helmet variations and 1 Hi-Gloss helmet sticker. Unlike most of the teams we're reviewing, the Giants helmet underwent a few changes during this time period which are reflected in changes seen in the Fleer helmet patches. The single bar variation from 1972 & 1973 is on the top while the double bar version from 1974 is on the bottom: 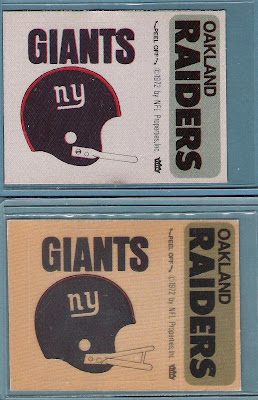 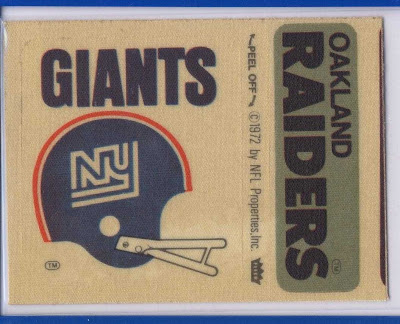 and in 1976 the helmet design changed again to read "GIANTS": 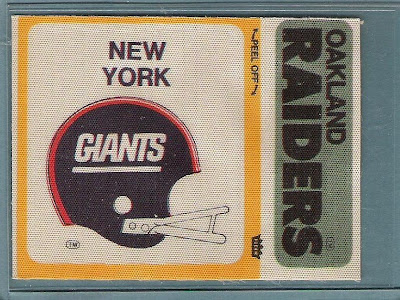 Thanks to Craig, I can also show the 1976 Hi-Gloss Sticker: 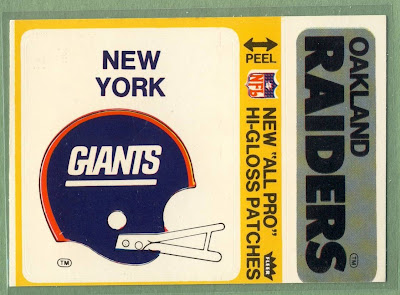 The Fleer Sticker project ran into a little technical difficulty yesterday when I discovered that the Giants Hi-Gloss Helmet Sticker in my collection was a doctored forgery. Someone had replaced the Raiders sticker with a Redskins sticker which I had never caught until I started scanning the stickers last night. Upon closer inspection, it was clear the sticker had been doctored as the Redskins sticker was sticking up just a little bit over the sticker backing, indicating that someone tried to make the sticker look complete by adding on another team name.

The emergency call went out to Craig, who promptly responded with the scan pictured above. Thanks for coming through in the clutch Craig! Craig was also kind enough to share the 1975 helmet patch shown above.

The Giants logo patches underwent similar changes as we saw with the helmets. Making things even more interesting is that for a few years, Fleer printed 2 versions of the logo patch - one with a red background and one with a blue background: 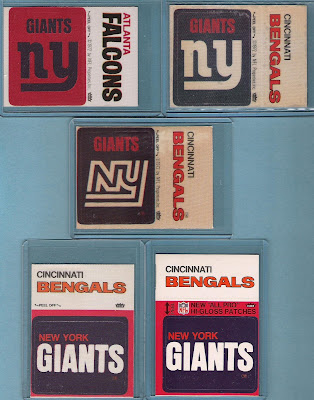 My experience which Craig also has noticed is that the red background patch is less common than the blue background patch, leading me to believe that it was not available in 1974. I'm not ready to say definitively that it was not produced in 1974, but I would lean towards saying it wasn't. Until we get an uncut sheet, or someone is willing to bust a few unopened boxes, we really won't know for sure.

The patch in the middle is from 1975 with the revised "NY" logo, and the 2 patches on the bottom are the 1976 cloth patch and Hi-Gloss Sticker reflecting the change to "GIANTS".
Posted by Fleerfan at 7:46 PM