Blog Bat Around: Who Are You?

I saw Gellman’s idea for The Blog Bat Around at Sports Card Uncensored, and the topic got me thinking about questions that I sometimes wrestle with and never seem to be able to completely answer.

The question: Who Are You?

WHAT DO I COLLECT?

I’ve been a collector since as far back as I can remember. I did a post earlier this year on my first collecting obsession - Wacky Packages. This was my first experience with something that had a checklist. 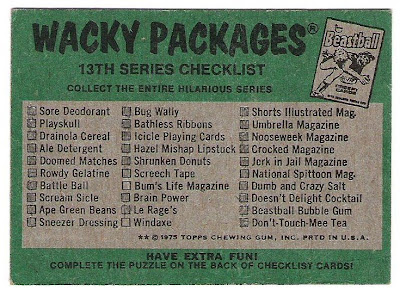 By putting those checklists on the back of each puzzle piece, Topps was able to tempt me into buying more packs because I wanted to see what the other titles looked like. Filling out the checklist, and getting that last sticker to complete the set became an obsession. Each pack that yielded a sticker or two to fill in one of those checklist boxes was a thrill to open.

Shortly after the Wacky craze, I discovered Baseball cards. The checklist went from 30 stickers to 660 cards. This was really getting fun. 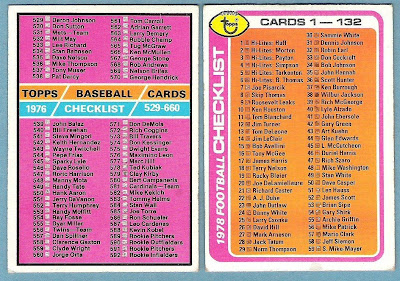 From there, I added Football, Basketball, and for a while even Hockey (back in the days when there was only one card set per sport – I needed to find something to collect in the off season!). The mid to late 70’s was when I really developed my love of collecting, marking off each box on the checklist until I had the entire set.

Then came the 1980s, and it was a great time to be a collector. When Fleer won their lawsuit and opened the door to competition, the baseball card market took off. 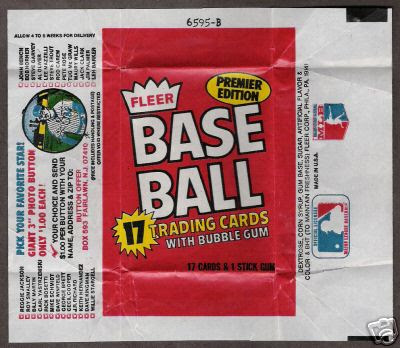 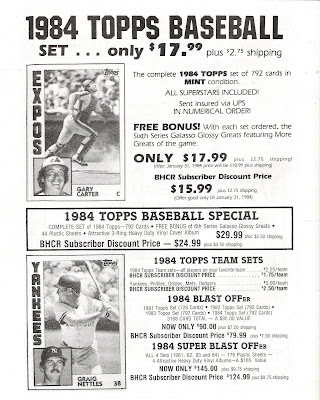 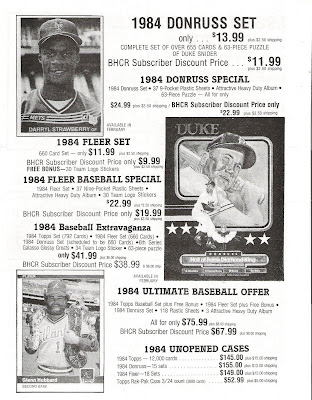 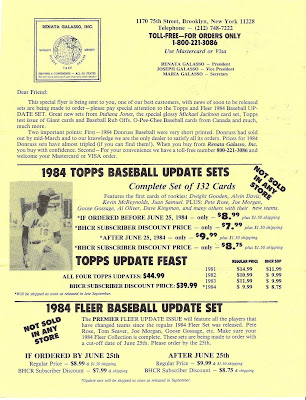 Being a completist, I had to have every set that came out. For the 80’s at least, I was more or less able to keep up with each new release. There were starting to be a lot sets produced, but it was still manageable.

In addition to cards, I also was collecting comics, so I was really busy, but having a great time. 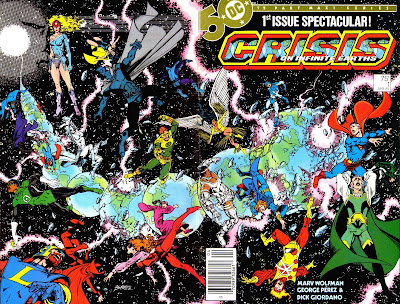 Like everything else however, too much of a good thing ends up becoming a bad thing. Once the 1990’s rolled around, the market had become so crowded that it was hard to really enjoy putting together all the sets that were coming out each year. With new releases coming out almost weekly, the enjoyment in trying to complete a set turned into work. Collecting felt like a “chore”. What was the point in trying to put together one set when another one was coming out next week. Comics got to be the same way. It was so hard keeping up with so many cross-overs that I finally gave up buying those as well.

That is the curse of being a completist. Since I was trying to collect a complete run of everything that was coming out, I was getting frustrated with having to work on yet another set if I wanted to keep up with my goal of having all the sets that were produced for a given year.

I finally reached a point where I decided I couldn’t keep up with collecting every new card release. It just wasn’t fun any more. I think the reason it wasn’t fun for me was that I was setting too high a goal (collect all the sets produced each year) that as each passing year brought more card companies and more sets, at some point I was going to have to change my focus.

Since I didn’t really like the idea of only building certain sets from a given year but ignoring others (again, that completist mentality kicking in), I decided I would refocus my efforts on going back and building sets that I had always wished I could complete as a kid.

I stopped buying new cards (except for a factory set so I could keep the consecutive Topps sets streak going!) and I started working backwards to start building sets that were released before I started collecting, with the goal of trying to complete sets all the way back to 1965, the year I was born.

I started with Baseball, and then Football, and finally Basketball. I eventually finished this goal for Baseball, have made it as far back as 1966 with Football (those 1965 tall boys with the Namath rookie are a tough set that I'm not ready to tackle), and have made some progress on Basketball.

I also branched out to other items. Things like the original “inserts” and other oddball items from late 1960’s - early '70's Topps releases like posters, coins, decals, stamps, and deckle edge cards. 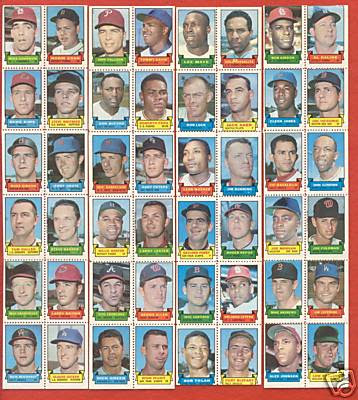 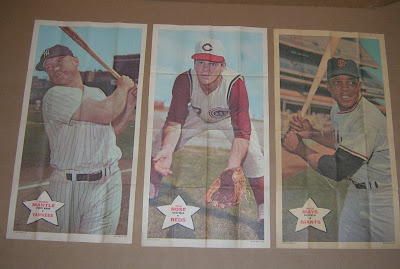 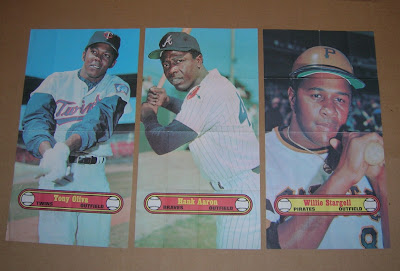 I also tried to finish off those old Wacky Package sets that I never completed as a kid, and worked on the Kelloggs and Hostess sets that I would always bug my mom to buy so I could get the cards. 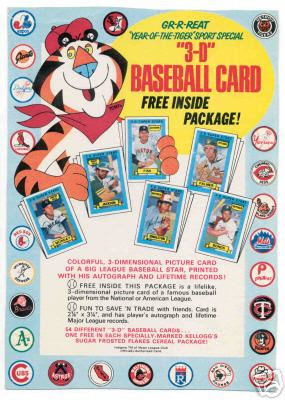 I also started working on other “oddball” items like Fleer cloth patches/stickers/decals/big signs/etc, which is what ultimately led to this blog.

The biggest challenge for me is deciding where to draw the line on what to collect. There are so many other sports related items to collect besides cards (programs, media guides, tickets, pennants, etc.) that I have to fight the urge to "have it all" and stay focused on just a few things at a time. Otherwise, I'd never complete anything.

In many ways I miss being involved with collecting new cards, but given how much fun I am having with the older sets, I really don’t think there is any way I could do both. That is one of the reasons I enjoy reading a number of the blogs that are being written. At least I can stay informed on what is going on with the new card market even if I’m not active in it.

This is the question that I'm not sure I can completely answer. I think its for a combination of a number of reasons:

Why do I collect cards in the first place, especially of players I never saw play? I think it is because I love sports and its history. I enjoy reading about the history of sports, and from time to time I try to incorporate the books I’ve been reading about things like the history of the AFL or the one year existence of the Seattle Pilots into my posts. Collecting cards, especially older cards, helps me connect to sports history, even if I never witnessed it first hand.

As I mentioned earlier, that rush I used to get in checking off a box on my Wacky or Baseball card checklists (nowadays deleting an item off my wantlist spreadsheet) is something that is somehow addictive.

The thrill is in the hunt. Tracking down and securing the item brings a sense of accomplishment. Of course the irony is that once the item is in the collection, it doesn’t seem to bring as much satisfaction – probably because you aren’t consumed with trying to find it. You still have the sense of satisfaction knowing you have the item, but that feeling isn’t as strong as the feeling you get when you actually find and acquire the item.

3) Reconnect with my Childhood:

Since many of the items I’ve worked on collecting were items that I had always thought would be great to have when I was younger, there is no doubt that much of what probably drives a man in his 40’s to spend even a second of his time thinking about a piece of cardboard or a sticker is rooted in the fact that he is somehow reconnecting with the enjoyment he had collecting these items as a kid.

Collecting today is simply extending the enjoyment I had collecting as a kid, and allows me to stay connected with that kid that I used to be so many years ago.

Remembering the Fleer Baseball and Football stickers I had bought as a kid, I also started going back and putting together these sets. Then a funny thing happened – as I started collecting these issues, I realized that I was coming across variations that weren’t mentioned in any price guides. Through other collectors, I continued to learn more and more about these items. 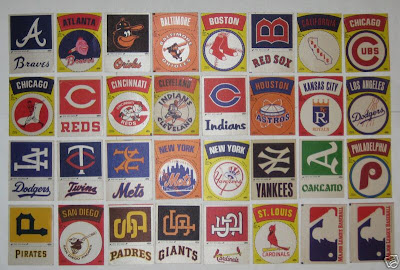 When I started reading baseball card blogs, I got the idea that blogging would be a good way to share the information I’ve found in my years of collecting these relatively obscure items with other collectors since there isn’t much information devoted to these items in the price guides. I decided to approach the blog as a way to share information that I wished I could have found when I stated collecting these sets so I knew what I needed to be looking for.

I also figured it would allow me to meet other collectors who had a similar interest in these items, and it certainly has which has been the most rewarding part. The other thing as I mentioned earlier is that communicating with other bloggers helps me at least stay informed on what is going on in the hobby, even if I’m not actively participating from the standpoint of collecting new releases.

If I had to define myself, I’d say I’m an avid sports fan and vintage card collector who probably still thinks about collecting like he’s 13. I’m a completist, which means the enjoyment I get from collecting comes from building and ultimately completing sets. I enjoy the challenge of trying to put together older sets that I remember wanting to collect as a kid. Collecting today allows me to continue the hobby that I first enjoyed in my childhood, and also gives me a good way to stay connected with the history of sports.

While I know many collectors are player or team collectors, any time I have a few cards from a particular set, I really don't feel satisfied as a collector unless I'm working towards completing that set. I think this probably comes from the fact that as a kid, that was generally the goal of card collecting, so from my earliest days in the hobby, the focus was always on the completing the set.

Very nice post. The only other thing I can think of to say is: me, too.

Outstanding! You're the most unique collector I know!! Really interesting stuff...

I always loved collecting the Fleer Baseball Logo Stickers, but was never able to find any information until I found your blog. It's great!! Thank you. Your attention to detail is great. I am now in the process of putting together complete sets (all variations), which I was never able to do until I found your blog. Thanks, anxiously awaiting detailed info on the 86 through 91 baseball sets. When can I expect a posting? By the way I have the 85 "Boston" Redsox. :)

DJFrank540 - you don't happen to have an extra "Boston" RedSox sticker do you? I'm still trying to track one down! Maybe we can work out a trade. Just let me know!