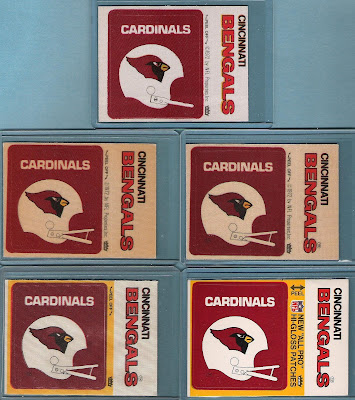 There are 3 logo cloth patch variations and 1 Hi-Gloss logo sticker for the Cardinals as the same cloth logo patch was issued for 1972 through 1974 as seen on the top left with the 1975 TM version on the top right: 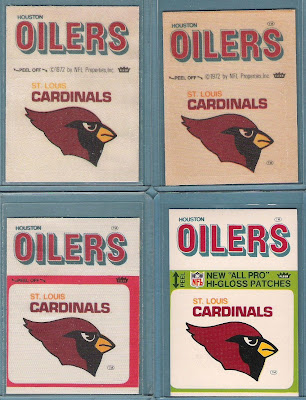 The 1976 cloth patch and Hi-Gloss sticker shown on the bottom row.

AFL History Lesson: How the Cardinals were responsible for the birth of the American Football League. 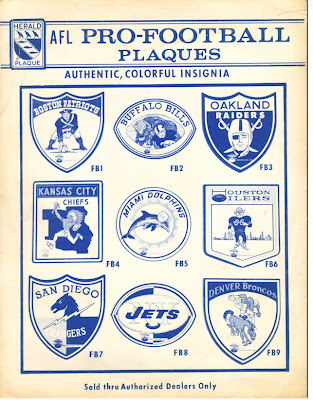 In the late 1950's, the Chicago Cardinals were in trouble. They had lost nearly $1 million during the decade, and the team's owner Charles Bidwell had died. He left the team to his widow, who remarried a man named Walter Wolfner. As Chicago was a Bears town, the Cardinals were considering a move.

Many prospective owners came calling on the Wolfners, including Lamar Hunt. After negotiating for months with the Wolfners with no success, Hunt traveled to Miami in February 1959 to meet for a final time to try to work out a deal. Walter Wolfner seemed intent in staying in Chicago after all, and was not going to budge on accepting an offer to sell the team. In the meeting he mentioned that many other people were interested in the team, including an oil millionaire named Bud Adams as well as groups from Denver and Minnesota.

According to Michael MacCambridge in America's Game, 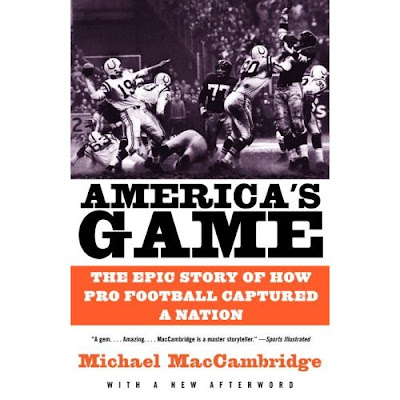 Lamar had a sudden burst of inspiration on the flight home and began sketching his plans out on any paper he could find on the plane. By the time the plane landed, Lamar Hunt had drawn up the plans for the new league, including a rough schedule of games.

With the information he gained from his meeting with Wolfner, he contacted Bud Adams as well as the groups from Denver and Minnesota about starting up a new league, which became the nucleolus for AFL.

On August 3, 1959 a mere 7 months after his attempt to buy the Cardinals failed, Lamar Hunt announced the formation of the AFL, which would begin play the following year.

Had the Wolfners been willing to work out a deal with Lamar Hunt, there never would have been the AFL. Perhaps a rival league would have formed a few years later, and the NFL probably would have finally gotten around to expanding at some point, but they certainly never would have expanded to the degree that the AFL allowed pro football to expand with so many new teams at once. For a great look back at the AFL, check out Remember the AFL

Thanks to the Cardinals turning down Lamar Hunt, the inspiration to form a new league was born, and pro football would change dramatically as a result.

The AFL brought competition to the NFL, which quickly changed its mind about expansion and put the Cowboys in Dallas (to try to force Hunt to give up his plans for the league since his team was the Dallas Texans) and then got the Minnesota group to defect from the AFL to join the NFL as the Vikings (again trying to force the AFL to give up their plans). Additional teams were added in Atlanta and New Orleans a few years later.

Of course, the irony is that a year after turning down Lamar Hunt and giving him the inspiration to form the AFL, the Cardinals moved to St. Louis.