The Tampa Bay Buccaneers joined the NFL as one of two expansion teams for the 1976 season just in time to appear on Fleer's final Cloth Patch set. 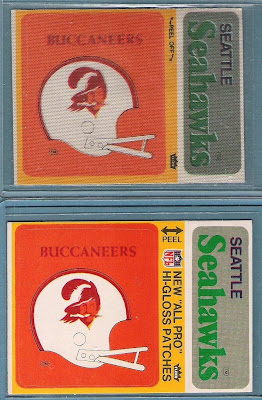 Bruce the Buccaneer, or "Bucco Bruce" is shown on the 1976 Fleer Cloth Logo patch (top) and the Logo Hi-Gloss sticker (bottom): 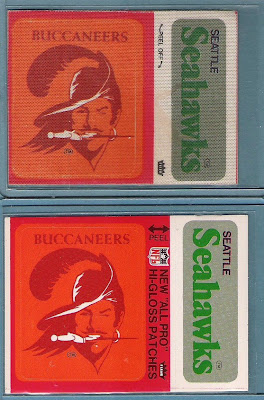 No post about the Buccaneers first season can avoid mentioning the fact that they are the only team to post a winless season in a season lasting at least 14 games. Prior to the Bucs infamous season, the last team to go winless was the 1960 expansion Dallas Cowboys, who at least had a tie in route to going 0-11-1. 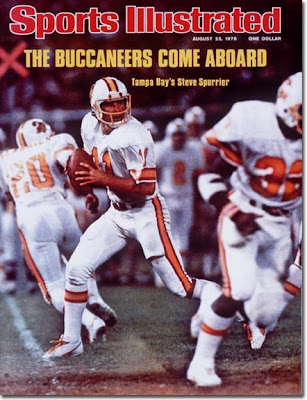 The team didn't fare too much better in 1977 as they continued their winless streak to 26 games before finally getting their first victory in week 13 of the season against the Saints. They also won again the next week against the Cardinals to finish the season 2 - 12.

By 1979 however, the Buccaneers had turned things around and won the NFC Central title and won their first ever playoff game against the Eagles. They went from being winless in 1976 to the NFC Championship game in 1979 where they played the Rams in a game that was a defensive struggle for both teams with the final score in favor of the Rams 9-0. Quite a remarkable change of events for a team that got off to such a disastrous start.
Posted by Fleerfan at 3:40 PM

I hope the retired, winless-1976 Bucs don't fly to Detroit next week to try to jinx the perfectly-imperfect 2008 Lions into a win!