The Seattle Seahawks joined the NFL as one of two expansion teams for the 1976 season, and were therefore able to appear on Fleer's final Cloth Patch set. 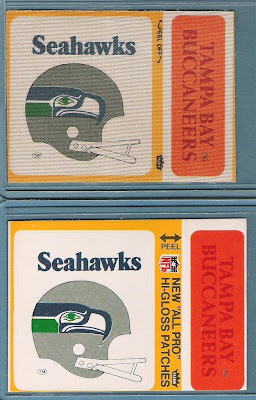 Both the helmet stickers and the logo stickers were paired with the other 1976 expansion team - the Tampa Bay Buccaneers. By making these pairings, Fleer did not have to change any of the other patch combinations in the set.

Here is the 1976 Cloth Logo Patch, courtesy of Craig: 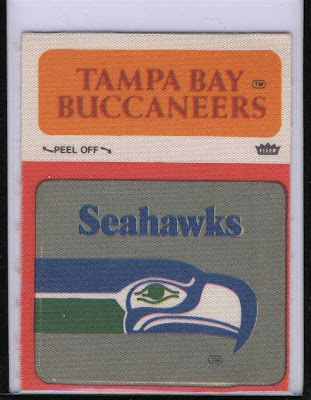 and here is the Hi-Gloss Logo sticker: 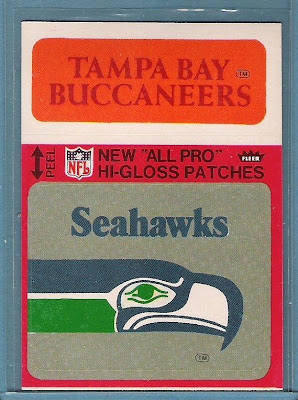 One thing I remember about the 1976 season (which happens to be the first season I really followed the NFL) was that the Seahawks were an NFC team and the Buccaneers were in the AFC. 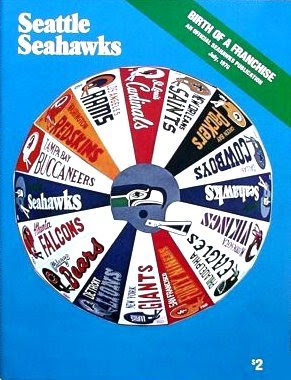 Then in 1977 each team switched conferences, where the Seahawks remained in the AFC until 2002 when they moved back to the NFC due to the NFL realignment (the Seahawks are the only team to switch conferences twice since the AFL-NFL merger in 1970).

I'd always wondered why the teams switched conferences after that first season, and found out that the NFL created a very unusual scheduling arrangement for both expansion teams for their first two seasons.

Rather than play the traditional home and away game against other teams in the division, some games against other teams in the conference, and an few interconference games, the NFL made the Seahawks and Buccaneers "swing" teams that played each team in their conference 1 time (which would have been 13 games as the NFL season was 14 games at the time) and 1 game between the two expansion teams. In 1977 the teams switched conferences, and did the same thing. This way the expansion teams played against all the other NFL teams during their 1st 2 seasons.

In 1978, the schedule increased to 16 games, and the Seahawks and Buccaneers remained in conferences where they had played the 1977 season, and began playing a normal schedule.
Posted by Fleerfan at 6:27 PM