We wrap up the review of the 1972 - 1976 Fleer NFL Football Cloth Patches with a look at the patches that Fleer produced for the NFL logo, the AFC & NFC Conference Champions, and the Super Bowl winners.

1972
The first issue in 1972 has the NFL Logo on 2 different patches, one with the AFC Champion Miami Dolphins and the other with the NFC and Super Bowl VI Champion Dallas Cowboys: 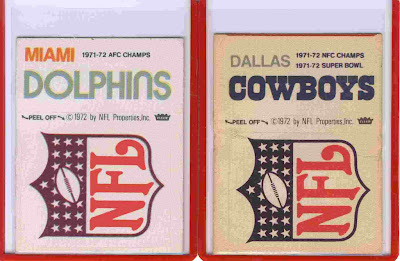 The 2 patches shown above are courtesy of Craig. I would like to thank Craig for his assistance with this project as he has been very gracious in providing me with pictures of patches that I don't have in my collection.

I'd also like to quote Cowboys expert Andy who was asking me about this particular Cowboys patch today. As I can attest since I can't seem to find one - "This one was tough!!"

1973
Once again there are 2 NFL Shield Patches with the AFC and Super Bowl VII Champion Miami Dolphins and the NFC Champion Washington Redskins: 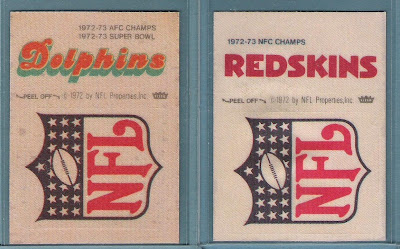 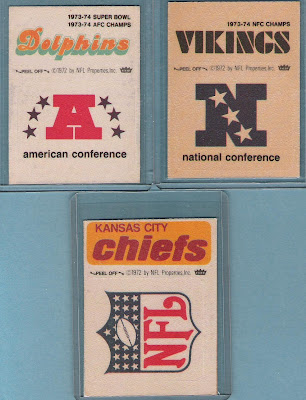 1975
Following the same pattern as 1974, there are AFC, NFC, and NFL Patches. The 1975 patches consist of the AFC Logo with the AFC Champion and Super Bowl IX Champion Pittsburgh Steelers and the NFC Logo patch once again features the Minnesota Vikings: 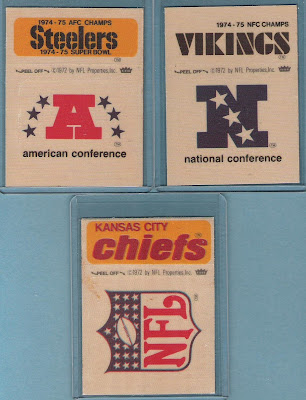 The NFL logo is once again paired with the Chiefs. As with all the 1975 patches, TMs were added this year.

1976
Due to the addition of the expansion Seattle Seahawks and Tampa Bay Buccaneers, Fleer replaced the Conference & NFL logos with the new teams, so there are no Conference or NFL Logo patches in the 1976 set.


If you've been following along with the posts over the last few months, I hope you have found the look back at these enjoyable and informative.

Before I move on to more Fleer football releases, I've got one more cloth football patch set to review, so stay tuned!
Posted by Fleerfan at 6:50 PM