The Pittsburgh Steelers have a variation in the helmet patch between 1972 and 1973 thanks to the lettering in the team name. As we saw when we looked at the Vikings logo, the Rams helmet, and the Packers helmet, the Steelers made a change in the lettering in their team name, going from an upper case print style in 1972 (top left) to a lower case stencil script style in 1973 (top right): 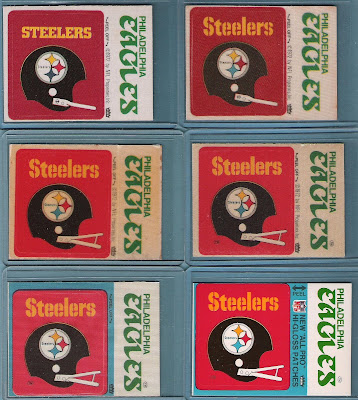 In 1974 the facemask changed to a double bar (middle left) and the patch added TMs in 1975 (middle right). The 1976 cloth patch and Hi-Gloss sticker are on the bottom row.

There are 3 logo cloth patch variations and 1 Hi-Gloss logo sticker for the Steelers as the same cloth logo patch was issued for 1972 through 1974 as seen on the top left with the 1975 TM version on the top right: 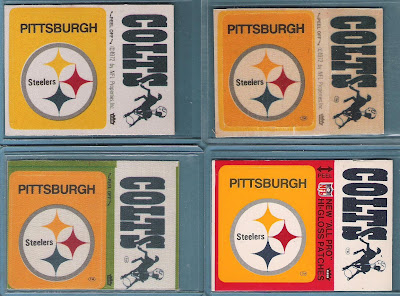 The 1976 cloth patch and Hi-Gloss sticker shown on the bottom row.
Life During Wartime (No, this is not about The Talking Heads song)
As dayf & --david noted in the comments, the Steelers helmet is matched up with an Eagles sticker which appears to be Fleer's idea of a twisted joke. However, there is a little known historical fact that for one season the Steelers and Eagles merged into one team for the 1943 season which was called the "Steagles". 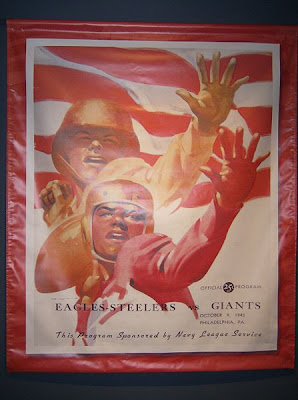 During WWII, the NFL was so depleted of players that the Steelers were down to 6 players and the Eagles only had 16. The Cleveland Rams actually suspended operations for the season. If 2 more teams shut down, that would have left the league with only 7 teams which would have made a regular seaon very difficult as one team would be idle each week and only 3 games could be played each Sunday. The NFL draft wasn't much of an option since most college men were already being drafted by their country to fight the war.
Art Rooney came up with the idea to merge the Steelers and the Eagles for one season to keep both teams from having to miss the season and possibly forcing the NFL to cancel the season.
The "Steagles" went 5-4-1 in 1943 and gave the Eagles their first winning season ever, and the Steelers their second winning season.
There is a book which covers the history of this team by Matthew Algeo, called Last Team Standing: How the Steelers and the Eagles—"The Steagles"—Saved Pro Football During World War II. 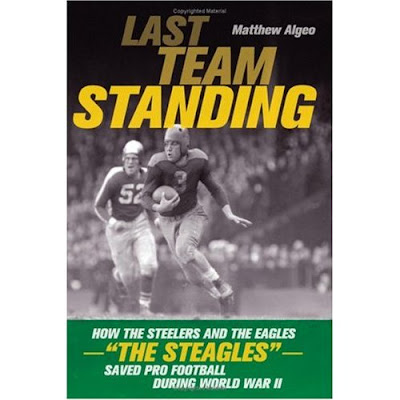 In 1944 the NFL was in better shape as the country had enough soldiers and the draft rules changed so that men over 26 were no longer being drafted to go to war. The Eagles had enough players to once again field a team, but Pittsburgh still did not have enough players. Art Rooney merged his team with the Chicago Cardinals for the 1944 season, creating a team known as Card-Pitt (which earned them the nickname "carpet" due to the fact they went winless, and the fact that "every team walked all over them"). Art Rooney said that this was the worst team in NFL history.

In 1945 the Steelers and Cardinals resumed normal operations and were able to field their own teams.
Posted by Fleerfan at 8:53 PM

Steelers and eagles on the same card? That's like mixing matter and antimatter or crossing the streams... Nothing good can come of that. I guess it could be worse... could be the Browns.

LOL, dayf, I was thinking the same thing! In fact, I had clicked on comments specifically to say:

Steelers and Eagles on the SAME CARD!? What kind of sicko worked for Fleer at the time!?!?

And from what I found online, the Steagles have the record for number of fumbles in a game: 10 fumbles in one game, yet still managed to WIN the game!?! Oh, this is wrong on so many levels...

Hello - I am an Eagles fan that lives in Indianapolis, Indiana! I am looking for some really old Eagle's items. Really what I am in dire of is a Steagles poster. Can you point me in the right direct?