If you'd like to add a healthy item to your Super Bowl party menu, you might want to consider bananas: 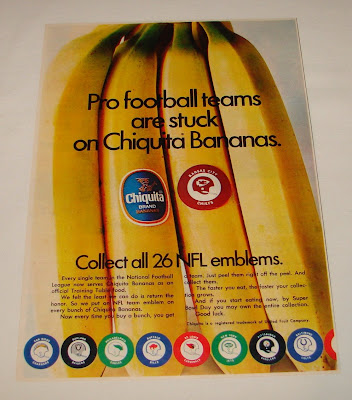 Back in 1970 Chiquita ran an NFL promotion featuring small stickers of all 26 NFL teams on their bananas. In addition to the magazine ad above, the promotion was advertised in newspapers as well: 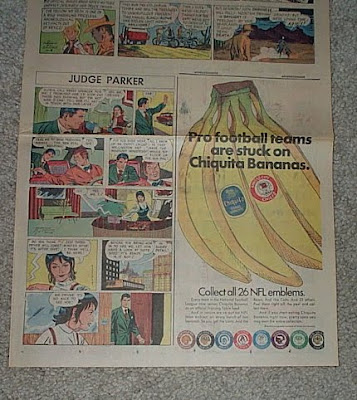 In addition to looking through the bananas at the grocery store to find your favorite team, you could order a complete set of the stickers:

Since the stickers are rather small in the scan above, here is a closer look at all the teams: 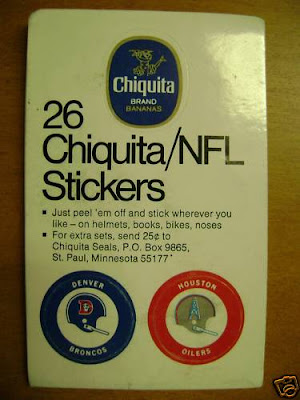 A complete sheet for only $.25! Quite a bargain considering these strips now sell for a couple of hundred dollars if all the stickers are still attached. 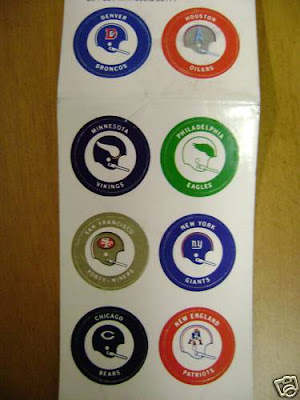 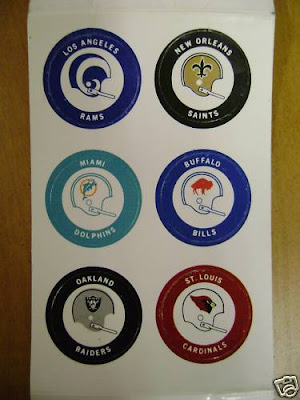 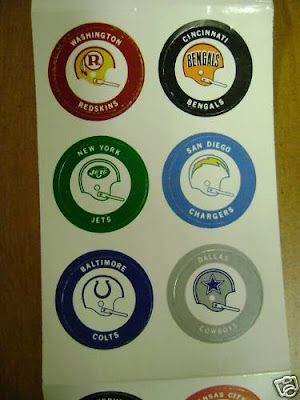 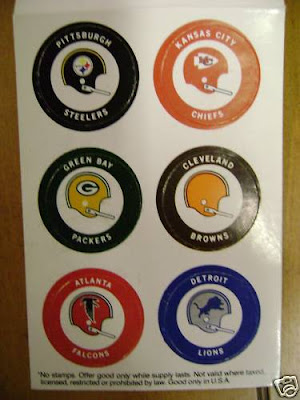 The stickers were apparently also available in 1971 as this ad for a Chiquita football (yellow of course) indicates that you could get a sheet of the stickers along with the football: 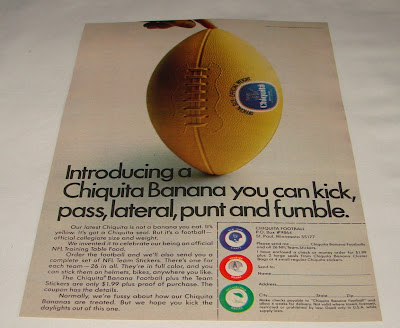 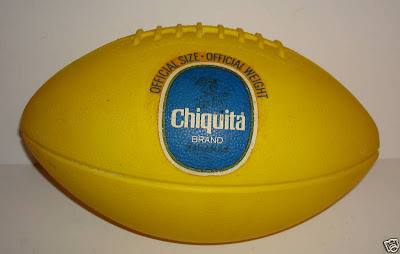 Chiquita had a marketing partnership with the NFL for a few years as this 1969 ad shows an offer for an NFL 50th anniversary transistor radio: 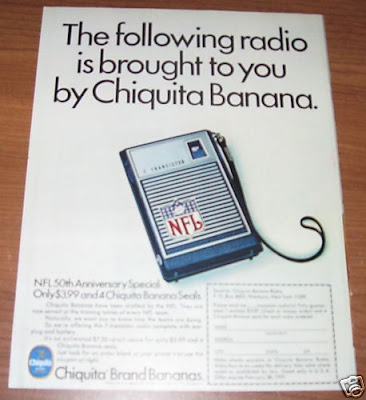 And finally, Chiquita had one other NFL promotion in 1972 for viewmaster like slides: 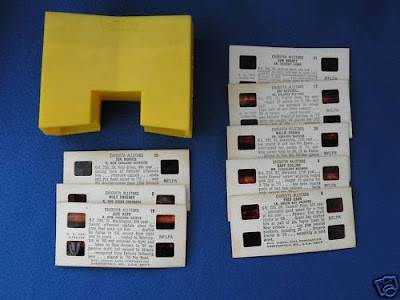 There were 13 different slides which each had 2 players (1 on each side of the slide). When the slide is placed in the viewer, the two bottom slides are shown of the first player. When you flip the slide over, you see the other two slides of the other player.

While bananas aren't a food that you would normally associate with football, Chiquita certainly had a very productive relationship with NFL Properties from the late 1960's to the early 1970's.
Posted by Fleerfan at 8:00 PM

This blog is awesome - the obscure stuff you had posted, I had NO idea existed. Very cool stuff and nice pics! I stay mostly in baseball, so that's probably why I didn't know about this stuff...hecka cool!

Man oh man. My mother had ordered the stickers and football when i was a kid. That yellow football was made of the hardest material known to man. It hurt like hell to catch it. The stickers are still stuck to the inside of what was my bedroom closet at my parents' house.

i had all these stickers,colected them individually...it took me forever to find my baltimore colts one...i had them on a piece of card board,tacked up in my room

Great source of information! My mom ordered me set of slides and viewer when I was 7 and I recently came across it - still in the original box and was trying to find information on it - this answered all my questions - AWESOME!

Too cool! As a 10 year old, I was among a large group of kids who would race like mad to the grocery store after school, to add NFL stickers to the cover of our notebooks. It got to the point that the produce man would hover over the bananas and only put the sticker on the bunch, when a paying customer would show up. The Patriots sticker was the outcast of the group; everybody (westcoast) hated that logo and there was one kid with a big collection of them on his notebook.

I wonder if the lack of stickers led to the discovery that the plastic tamper-proof disc, on the pump bottles of Formula 409 worked great as a dime in the toy vending machines outside the store, as those became as rare as Chiquita stickers!

It was fun being a kid, even if we we're a little rotten and I thank God that we didn't have cell phones, internet, video games or 300 tv channels back then. We really got to be kids and it was just too damn much fun!

Eat your hearts out, lazy kids of today. We had to be made to come inside the house every day, and you won't leave your electronic contraptions behind, to go outside! It's no mystery as to why America is fat.

I was nine in 1970, and I recently re-discovered my complete set of the 26 team banana helmut stickers. Mine are between two sheets of saran wrap, and I was the only one in our school that ever found a Dallas Cowboys sticker.

My brother and I would "ditch" mom as soon as she got parked at the store, and run right back to the produce section of our local Red Owl to search over the bananas. It was great.

I showed the stickers to my three sons tonight.

I totally agree with the previous comment about being a kid then. We weren't ever in until mom had yelled down the street about three times, and was madder-then-hell by the time we actually made it home.

I had a paper route, collected once a week, and always had plenty of spending money. We'd pitch entire baseball games into the steps in front of the house.

When it was hockey season, we would go to the rink (usually with shovels) and skate for hours. I really can't understand all of the issues with the "pampering" of kids in sports these days; we played, throwing the baseball, shooting the hockey puck until we had whichever sport or skill mastered.

Thanks for the memories. Even if the stickers were worth thousands, I just had thousands of dollars worth of memories and smiles when I recalled collecting these stickers 42 years ago to my now teen-age boys...

I still have a full set too all attached to the original backing. Slightly discolored with time but in good shape. It even has the rare Washington Redskins helmet with the "R" logo, an attempt to get rid of the Indian reference of the day. It must be worth something?

Woow!!! Thanks for sharing the Chiquita Bananas sticker information. Dad worked with United Fruit at the Bocas del Toro Division of the company from 1969 to 71 ensuring train loads of bananas made it to the port of Almirante in time for export shipping to the USA, I think.

We lived in Farm 8 near Guavito and on weekends, the kids would visit the banana wash plants to find out if there were any discarded surplus stickers for us, including reels and reels of the NFL series stickers.

Sadly, the bundle we collected over three years were tossed out during one of our country moves.

Thanks again and keep collecting.

Woow!!! Thanks for sharing the Chiquita Bananas sticker information. Dad worked with United Fruit at the Bocas del Toro Division of the company from 1969 to 71 ensuring train loads of bananas made it to the port of Almirante in time for export shipping to the USA, I think.

We lived in Farm 8 near Guavito and on weekends, the kids would visit the banana wash plants to find out if there were any discarded surplus stickers for us, including reels and reels of the NFL series stickers.

Sadly, the bundle we collected over three years were tossed out during one of our country moves.

Thanks again and keep collecting.

The helmet stickers even made their way up to Canada. I still have the ones I collected with a buddy back in 1970. The only two I could never find were Denver and Buffalo. I was so envious of my friend who had one, or maybe it was both, of them. Anyway, the good news is that I did get them both on eBay several years ago along with the Jets and Colts stickers which got lost when they fell off of the piece of notebook paper that they’ve been stuck on for the past 50 years. Great memories!