Today we'll look at the 1st 4 teams in our review of the 1969-1971 Fleer Baseball Quiz Cards to see the variations between the 3 years on a team by team basis. 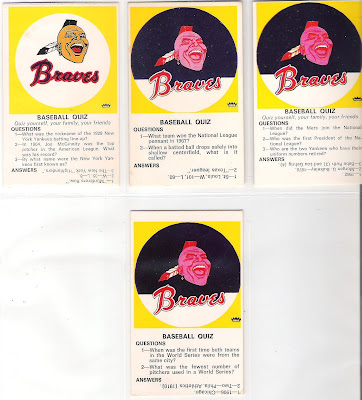 There are actually 2 variations for the 1970 card as it can be found with 2 different sets of questions.

The Baltimore Orioles had a black circle around the Oriole Bird in 1969, followed by the orange circle logo in 1970 and 1971 which completely gets lost against an orange background.  Since the logo went from black to orange, it would have looked much better to reverse the backgrounds as well to make the background black for the 1970/1971 cards so that the orange circular logo would stand out. 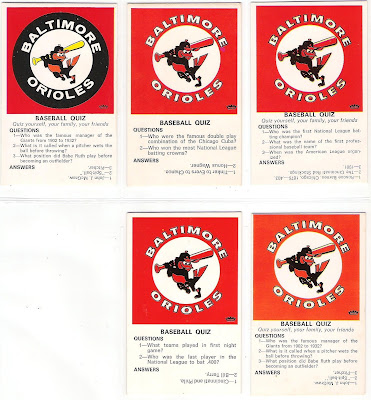 There are 2 variations for both the 1970 and 1971 Orioles cards as they can be found with 2 different sets of questions.


For the Boston Red Sox, the 1969 (3 Q / Small Logo) card has a smaller logo as you can see that the circle around the baseball does not touch the top or side borders while the 1970 and 1971 cards extend to the borders. The other differences are the circle around the logo is black and the stitching on the ball is entirely red in 1969 while the 1970/1971 logos have a blue circle and blue/red stitching as we see below: 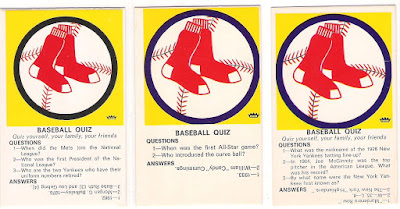 Finally tonight, we have the California Angels. The Angels logo changed each year going from a green diamond in 1969 to a white diamond in 1970, followed by the state logo in 1971: 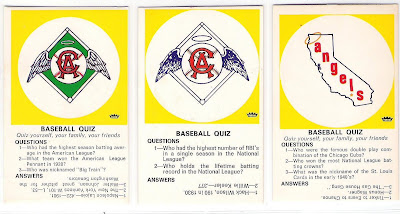 As with some of the other teams I mentioned in yesterday's post, the Angels logo also helps in figuring out the order in which these Quiz Cards would have been issue as it confirms that the 3 Q / Large Logo cards would have had to have been issued last given that the state logo is what they used during the 1970s.

Stay tuned as we will cover another 4 teams next time.
Posted by Fleerfan at 7:53 PM