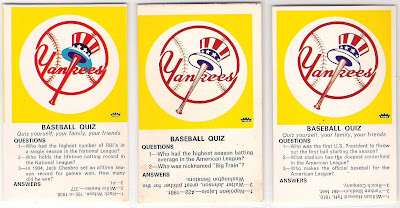 The Oakland A's logo changed each year. One change is pretty obvious, but can you spot the other one? 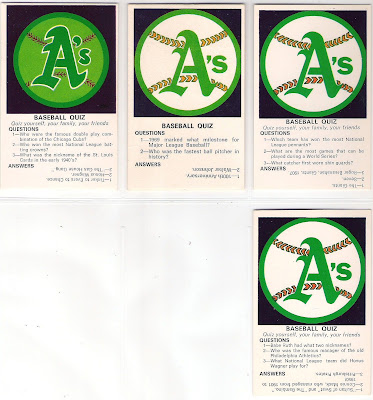 From 1969 to 1970 the baseball changed from green to white and the shape of the "A" changed a bit. Going from 1970 to 1971 there is another variation that I hadn't even noticed until I uploaded this scan for this post! Check the direction of the seams - in 1970 both move from left to right, but on the 1971 card the top seams move right to left. This is one of the reasons I find these Fleer issues so interesting - I keep coming across subtle little differences like this that I never knew existed, and as far as I know aren't cataloged anywhere.  There 1971 A's card can be found with 2 different sets of questions.

I mentioned a few days a go that the Philadelphia Phillies were one of the teams that helped me place the 3 card issues into a chronological order that made sense. The older Phillies Logo on the 3 Question / Small Logo card makes it pretty clear that this would have been the earliest issue, placing it in 1969. 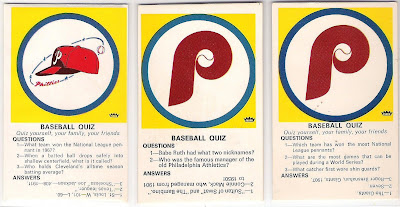 The Pittsburgh Pirates cards support my theory that the 2 question cards were issued next in 1970, with the 3 Question / Large Logo cards being issued last in 1971: 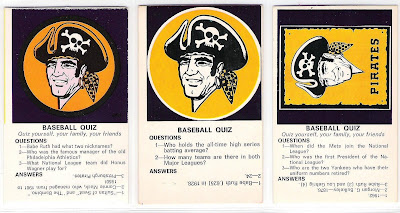 The Pirates logo changes each year as in 1970 the top of the Pirate's hat goes from a yellow rim to white. In 1971 the round logo changes to a rectangular shape with the name Pirates now in the logo. Since its the logo on the right that would show up in all subsequent Fleer logo issues until 1988, this once again leads me to the conclusion that the 3 Question / Large Logo cards would have been the final issue.

We've got one more group of teams to complete our review of the Quiz cards which we'll cover tomorrow.
Posted by Fleerfan at 9:44 PM