Picking up where we left off, we move on to the next team on our list which is one of the most interesting - The Milwaukee Brewers / Seattle Pilots.

I've mentioned the Pilots a number of times for various late 60's / early 70's sets with regards to using them to try to determine when a particular set was issued. Since they were only in existence for 1 year (1969), and didn't actually move to Milwaukee until the end of Spring Training in 1970, they are very helpful in developing a time line for when Fleer released certain sets.

It looks like Fleer did not have time to make changes to account for the Pilots moving in 1970 (just like Topps), which is why we find a number of Fleer issues containing the Pilots in 2 different sets. We saw this with the Iron Ons, and we will see it again with the Cloth Patches.

I think we would also see it with the Quiz Cards, but so far the elusive 3 Question / Small Logo Pilots Quiz Card has escaped me.

As we saw with the Royals yesterday, the initial Fleer Quiz Card set included the 1969 expansion teams since we have a 3 Q / Small Logo for the Royals. I have yet to find one for the Pilots, but one may exist.

But, since the Pilots were in the 1969 Iron On set, I'm pretty sure they would have been in the Quiz Card set that year as well. They also have 2 different Cloth Patches which I will be getting to shortly which leads me to believe there were Quiz cards for the Pilots in both 1969 & 1970. 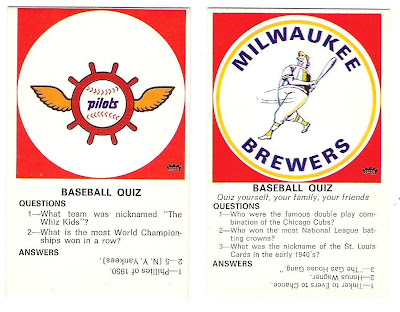 If I ever track down a Pilots card with the smaller logo and 3 Questions, I'll be sure to post it.


Now its time to play spot the variations with the Twins Quiz cards: 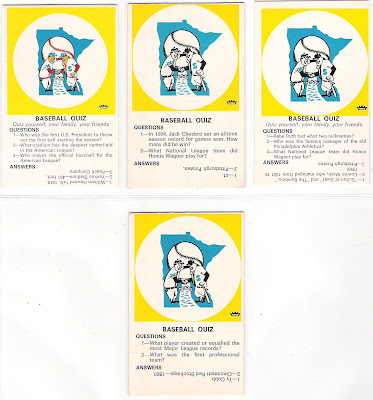 This variation is pretty easy to catch when all 3 years are laid side by side, but might be something you'd miss if you weren't looking at them together. The 1969 card has red stitching on the baseball and red sleeves and belts on the players while the 1970 and 1971 cards are done in black. In addition, the 1969 card has the players wearing blue caps while the next 2 years feature black caps.

There are 2 variations of the 1970 Twins card as it can be found with 2 different sets of questions.

We finally get to a team where I can spot no variations - The Montreal Expos! Of course I'm missing the 1969 card so there may be something I am not aware of, but then again, I'm not sure a 1969 card even exists. 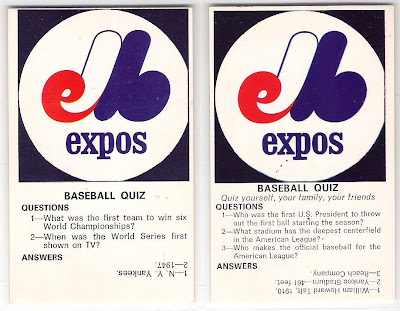 Why am I not sure a 1969 Expos card exists when I just got through saying that I think a Pilots card does exist? It has to do with the 1969 Iron On set. For some reason the Expos were not included in the 1969 Iron On set, but did appear the next year. Could there have been an issue with the Expos logo? Could it possibly have not been ready when Fleer needed the design to put together the Iron Ons & Quiz Cards? In the many auctions I've followed and pictures I've saved from these auctions, I've never seen a smaller Expos logo, which leaves 3 explanations:

At this point, I tend to favor explanation #1. I will continue the quest to get to the bottom of this mystery, but for now, I think with the team being left out of the Iron Ons that Fleer simply didn't have a logo to use when the sets were issued.

Finally tonight, we take a look at the Mets: 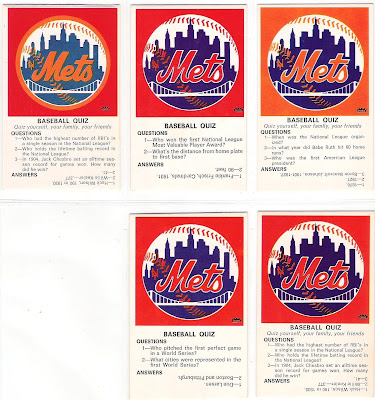 The logo changed from 1969 to 1970 with the addition of a white outline around "Mets" and white instead of blue inside the "e" and "s". The city skyline also changes from light blue to a darker blue.

If anyone reading this has either the 1969 3 Question / Small logo Pilots or Expos cards, please let me know. I'd really like to see a picture of these 2 cards as I would like to confirm they actually exist.

Check back in tomorrow for the next 4 teams in our variation review.
Posted by Fleerfan at 8:37 PM

That is one freaky Brewers logo. Maybe he is using a clothespin for a nose because of stinky beer.

Don't be putting down Milwaukee's Best!

The 1971 cards have a thinner card stock, too. I GAVE a 3 question Pilots card to a huge Pilots fan recently, because I had the 2Q card thinking it was the 1969 version. UGH. Thanks for your research and articles on these fun cards. I only wish I had read them sooner. My friend's home is like a black hole. If I ever can get him to find the 3Q card, I'll send along a scan/picture. Who knows, maybe by now one has appeared on eBay? all the best, Mark