In addition to the team logo quiz cards that Fleer produced from the late 1960's through early 1970's, they also produced quiz cards picturing a number of baseball stadiums.

The first type of card lists the name of the stadium under the picture, along with some stadium information and has a Baseball Fact or two on the bottom half of the card: 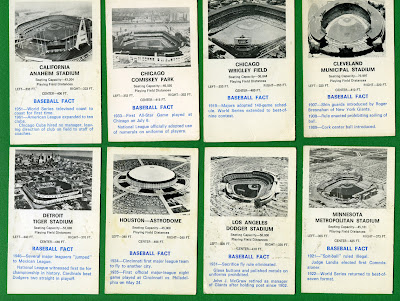 Next, we have a number of cards that have a picture of a stadium, but rather than indicating the name of the stadium, there is some MLB propaganda such as "Excitement & Color are always High at the Ball Park", "Nearly Fifty Million Paid to Watch Major League Baseball last year!" and "Baseball is Still the Number One Spectator Sport in America": 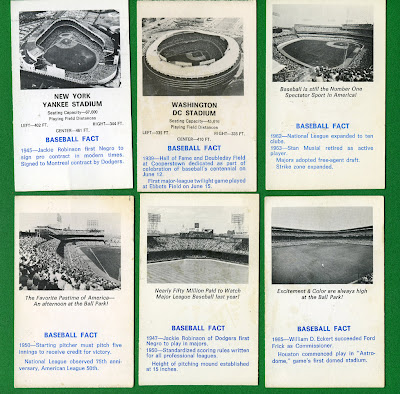 And finally, a third type (see the Yankee Stadium & Astrodome cards) which are hybrids of the first two that list the name of the Stadium, but instead of information on the dimensions and capacity include more blatant MLB self promotion: "Baseball is Preferred by More People than Football & Basketball Combined!": 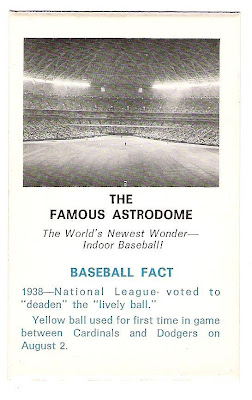 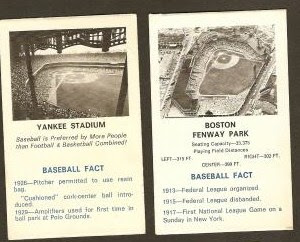 Do I sense a little nervousness at MLB headquarters as they saw what was happening with the NFL during this time period as it was growing into the sports powerhouse that it is today? Our sport is the best, no really it is!

From what I've been able to gather, not all 24 stadiums are included on cards. The 12 stadiums I have been able to confirm that are included are Atlanta, Fenway, Anaheim, Comiskey, Wrigley, Cleveland Muncipal, Tiger, Astrodome, Dodger, Metropolitan, Yankee, and Washington DC (later known as RFK).

If anyone has any more information on these cards, please let me know and I'll be glad to update the information in this post.
Posted by Fleerfan at 8:09 PM

I collected these Fleer stadium cards in 1969. I have 70 of these with only the 12 stadiums, 4 "propaganda", and 2 other unique stadium (Yankee and Astrodome) cards that you have noted. Given the number that I have, I suspect that was all that was released - at least in New England. Since I have a nearly equal number of the cloth patches that you show on your main page, my guess is that they were packed as one stadium card and one cloth patch. The key to the year is a 100th anniversary (1869-1969) of baseball cloth patch.

Thanks for this blog!

Are these cards worth anything I have five of them