Continuing the review of the variations for each team's 1969 - 1971 Fleer Baseball Quiz Cards, we pick back up with the Detroit Tigers. 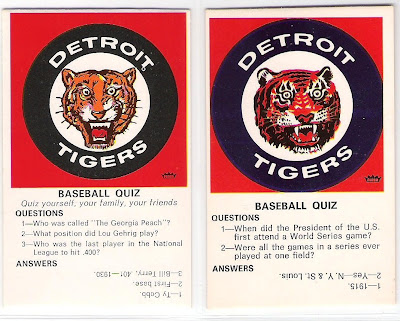 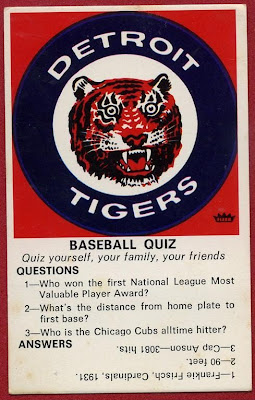 While the Houston Astros were for some reason left out of the 1967 - 1968 Fleer Emblem cards, the team did finally appear in the 1969 Quiz Card set. For the 1969 card, the logo was orange against a red background, so that you could see the round logo. For 1970 & 1971, the background matched the color of the logo so that you could no longer make out the round logo, with the 1970 card having a slightly more reddish color and the 1971 a bit more orange: 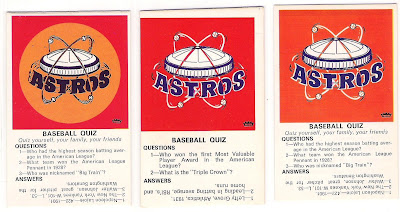 In addition, the lettering in the word "Astros" changed a bit as the letters had a white outline around them and were a brighter shade of blue. 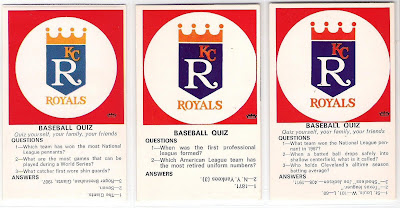 Other than the color change, the Royals logo was the same all three years - which makes them a bit of an exception relative to the other teams we've seen.

Finally, the Los Angeles Dodgers had a very subtle change to their logo when they went from a flat horizontal team name in the logo in 1969 to a logo with the name tilted at an angle in 1970 as well as in 1971: 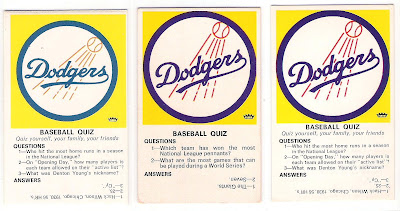 We've reached the halfway point - 12 teams down, 12 teams to go. Stay tuned for more unusual logo variations as we finish up our look back at the remaining Fleer Quiz Cards over the next few days.
Posted by Fleerfan at 7:37 PM