After a 3 year run of the team logo quiz cards from 1969 - 1971, Fleer produced one more set of Quiz Cards with team logos, but this time there were multiple logos on each card. 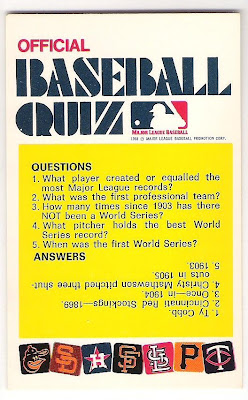 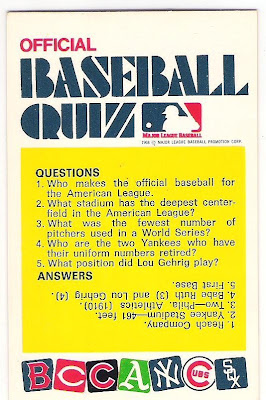 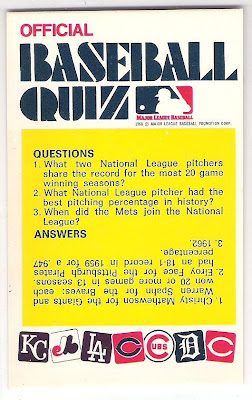 Of the 3 card styles I have been able to find, the Reds cap emblem and the Cubs logo are repeated on two of the cards. In addition, the Cubs also have their cap emblem as well, appearing to be the only team represented with a cap emblem and a logo.

The teams that are not accounted for are the Braves, Angels, Brewers, Mets, Phillies, and the Senators or Rangers depending on the year these were issued. Since there are 7 logos on a card, it would seem there is one more variation with the 6 teams I've listed as well as another team that gets repeated. However, in the auctions I've seen for these cards, I've never seen a card with any of these teams. I've seen a number of auctions for the cards I've pictured above, bunt none including the missing teams. If I come across a picture of the card I'm missing, I'll update the post to show the complete set of cards.

The cards have a 1968 copyright, but that refers to the MLB copyright on the logos, not when the set was released. The questions are the same that appeared on the 1969 - 1971 cards. The number of questions varies by card, but they are all from the same set. The difference in the number of questions is more a function of how many questions they could fit on a card given the length of the question and the answer.

The cards I've pictured above appear with a number of different sets of quiz question variations. I'm not sure how many cards would comprise a full set as I have not tried to catalog the various quiz questions. I am aware of 21 different cards based on what I've seen, but there could be more.

If anyone knows about another Quiz card variation with some of the team logos I'm missing, please let me know!

Fleer Sticker Project contributor Troy has shared his extensive collection of 1972 Quiz Card variations which you can see here.
Posted by Fleerfan at 8:40 PM