We've finally reached the end of our team by team look at the 1969 - 1971 Fleer Baseball Quiz cards. 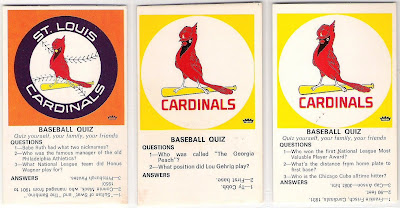 The San Diego Padres logo changed slightly each year with the Padre having golden skin and swinging a yellow bat in 1969, and changing to no color for the skin and a white bat for 1970 & 1971. In addition, the Padre's robe and the team name go from brown in 1969 to black in 1970 to a darker shade of brown in 1971: 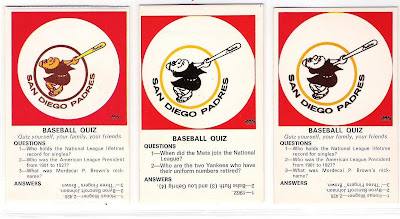 The San Francisco Giants also had color changes each year as the baseball went from white in 1969 to pink in 1970 to orange in 1971: 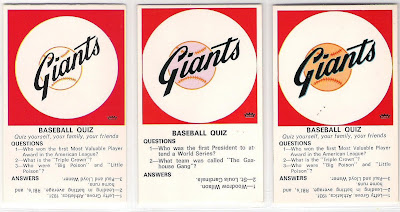 Last but not least, we have the Washington Senators. I have no reason to believe there was no Quiz card for the Senators in 1969, but I have yet to come across a quiz card with a smaller logo. The 1970 & 1971 versions to not appear to have any differences: 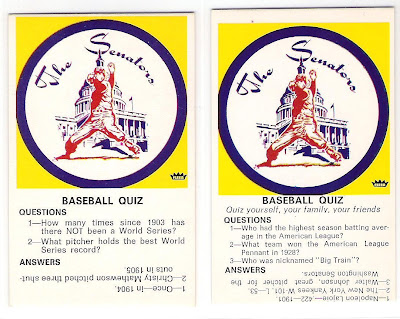 Once I find a smaller logo Senators card, I will update the post to show all three variations.

This concludes my review of the many Quiz card variations from 1969 - 1971. I think this exercise has demonstrated what I've been saying about the number of variations that can be found in many Fleer releases. What appears at first to be a single set can actually be multiple sets released over a few different years with variations found in each year once you start collecting that set and finding differences.

As we will see when I get to my upcoming review of the Fleer Cloth Patches, many of these variations will show up again with the the various patch sets that were released between 1969 and 1975.
Posted by Fleerfan at 9:33 PM

I've always loved the Senator's logo with the Capital in the background and the wide pitching stance. "1st in war, 1st in peace, and last in the American league"...was the saying wasn't it?

From my quick search - is the Senator's the only MLB logo in history to feature a pitcher?

Good memory on the "last in the American League" slogan. I think you are correct about the Senators being the only team with a pitcher in their logo. Too bad it didn't help them much!