Here was Fleer's alternative to Topps for kids' baseball card spending money in 1968: 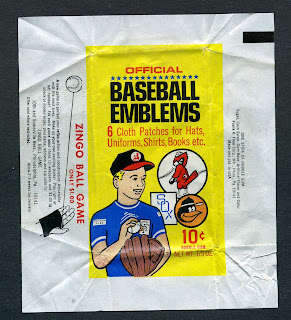 Fleer's 1968 Baseball Emblems looked very similar to the 1967 issue that I reviewed yesterday with a few minor differences.

Once again there were 3 items issued in the 1968 series:

From what I can gather from the wrapper, each pack must have contained 1 Team Emblem Cloth Patch (with a Logo, Hat Patch, and Shoulder or Pocket Patch) as well as 1 "Trio" Patch with 3 team names - hence the claim of 6 cloth patches per pack. The Logo card almost certainly was included to give some stability to the pack, but it is not mentioned on the pack (as were none of the other various cards inserted with cloth patches over the years for some reason).

As I mentioned yesterday, there are 2 ways to distinguish the 1967 Logo / Emblem Cards from 1968: 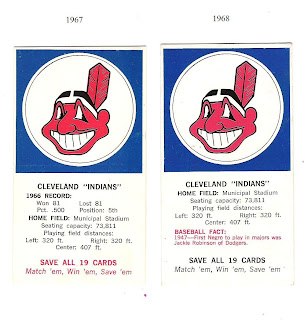 For some reason, the Houston Astros did not have a Quiz Card or Cloth Patch for either the 1967 or 1968 sets. Tune in tomorrow for the Great Houston Astros mystery that involves not only Fleer, but Topps as well!

From what little I have seen of the 1967 Cloth Patches, they appear to be identical to the 1968's except for the fact that the 1968's include the directions "PEEL OFF HERE" while the 1967's do not. I can't verify that every Emblem is the same for the Patches and the Cards for both years, but that appears to be the case.

Here is a comparison showing the differences on the cloth patches: 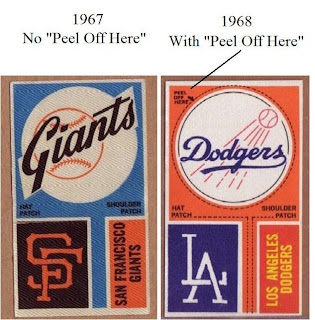 Here is a look at the entire 1968 Fleer Team Logo / Emblem Card Set: 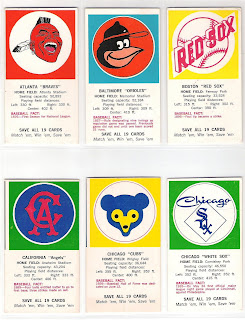 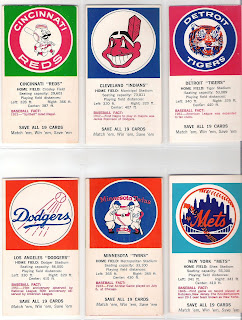 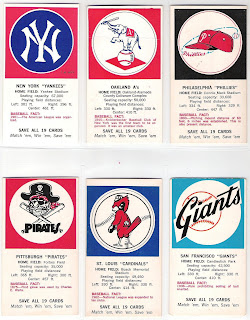 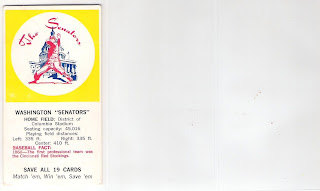 I don't understand why Fleer would not have promoted the Emblem Cards on the wrapper. I think they are a very attactive set.


Now for the Cloth Emblem patches (I'm afraid I don't have a scan of the Mets at this point): 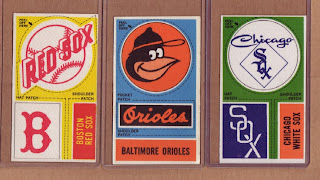 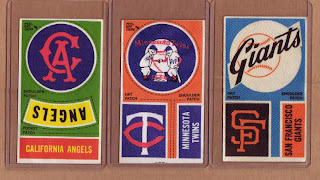 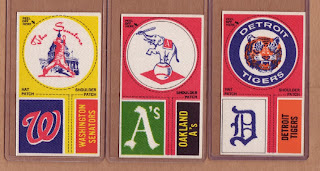 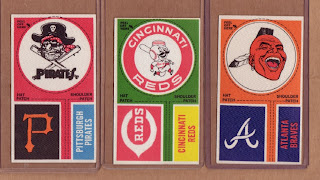 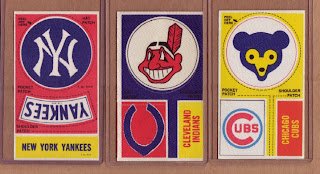 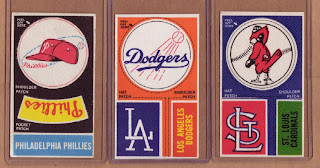 I'm afraid I don't have any pictures of the "Trio" patches for either 1967 or 1968. From what I've seen of them, they are simply the team names written in plain text. To get an idea of what I'm talking about, take a look at the Dodgers cloth patch directly above, and notice the Shoulder Patch. The "Trio" patches essentially look like 3 Shoulder Patches. If I come across any pictures, I'll be sure to include them.

As we will continue to see as we go through more Fleer sets, Fleer would typically come up with a design and use it for a few years in a row with minor changes made each year, just as they did for the 1967 - 1968 Baseball Emblems. Often these differences are somewhat subtle, so you may not even realize you have 2 variations of what appear to be a similar sticker. Since there is typically no date on many of these sets, it's a challenge trying to determine when a particular sticker or card was issued and which set it belongs to.

That is why I hope to be able to shed some light on these variations so that interested collectors can have a better idea of what they have, or what they are looking for.

As I mentioned earlier, tomorrow I'm going to cover something that has bugged me for years - what in the hell was going on with the Astros in 1967 - 1969!

Thanks to Randy, we've now got a picture of two of the "Trio" patches for which I previously did not have pictures:

Were the Trio stickers issued in both 1967 and 1968 ? If so, were they the same each year or different, and if different how ? Is there a checklist of them ---how many different ones ?

Can anyone answer the above questions ?

I have a trio sticker with Red Sox / Chicago Cubs / Baltimore Orioles. If you would like a pic from my phone, let me know.