As I mentioned in a previous post, the late 1960's to mid 1970's was a very productive period for Fleer in terms of a number of various Baseball releases. Today we turn our attention to another oddball item - Iron Ons.

Fleer issued 2 different series of Iron Ons during this time period. From what I can tell, the 2 series would likely have been released in 1969 and 1970 - based on the fact that there is a Seattle Pilots logo in both sets (with the 1970 set presumably having been printed shortly before the Pilots moved to Milwaukee at the end of Spring Traning that year).

Often you will see these referred to as 1968 Iron Ons, which I do not think is correct. The packs have a 1968 copyright (which says "1968 (c) Major League Baseball Promotion Corp."), but I believe this refers to when the logos were copyrighted, not when the product was actually released.

Today's post spotlights the first series of Iron Ons which I'm pretty sure was released in 1969.

Packs had a number of logos on the front: 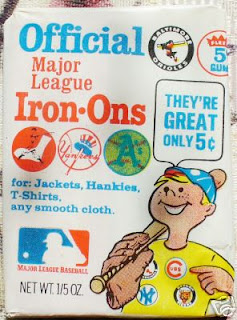 The front of the box also leads me to believe that these were a 1969 release given the box displays the 2 teams that met in the World Series the previous year:

More logos gracing the side of the box: 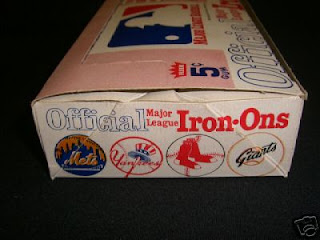 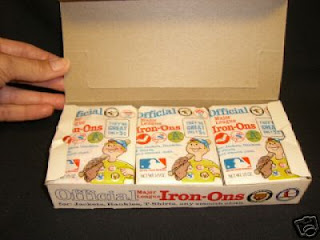 Each pack contained 1 strip of 3 iron ons, a card with directions on how to apply the iron ons, and a stick of gum. Here are 3 examples: 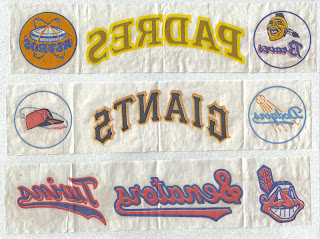 Since these were designed to be ironed on to items like shirts, the images had to be reversed.

There were a total of 16 different strips. Through the wonders of modern technology, The Fleer Sticker Project is proud to present how the iron ons would look once you ironed them on: 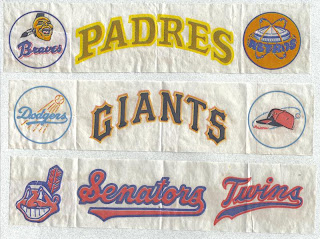 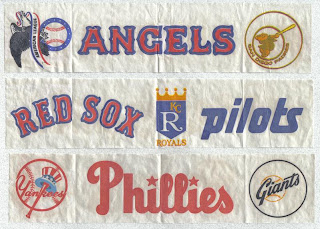 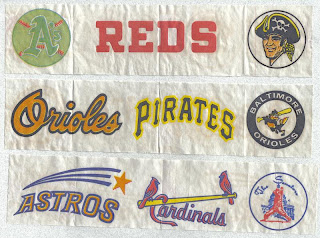 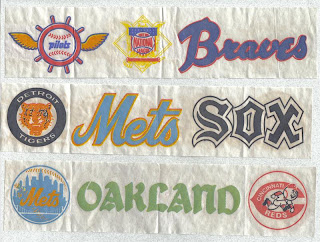 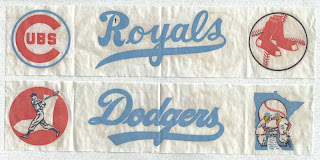 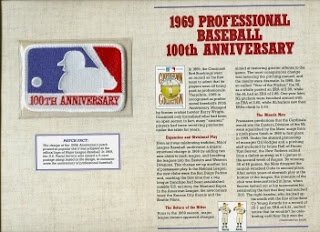 For some reason, there are no Iron Ons for the Expos, and there is only 1 Iron On for the Cubs (presumably because the team's logo is also what they wore on their uniform instead of the team name), while all the other teams have 2 (a logo and the name that was worn on their uniform).

The 1969 series of Iron Ons is less common and a bit more difficult to find than the 1970 series which I will cover tomorrow.

Given that the images are reversed, and given the size of the strips makes them somewhat difficult to display, this isn't one of the more popular Fleer collectibles you'll come across, but it does make for a nice collection of team logos.
Posted by Fleerfan at 8:07 PM

Good Morning,
I have a Iron On, Joe Torre, #C-1b,
Atlantic Braves. I have no idea if this was a Fleer? Or the year made? could you help me?
thank you,
debbie

Not sure I can help you, but I also have a sheet of Major League baseball iron-on stickers. It's somewhat similar looking to the one posted at the top. 14 stickers across the top by 12 stickers going down. The major league emplem says 1968. The Expos are on it. I have it framed. Is it worth any money?